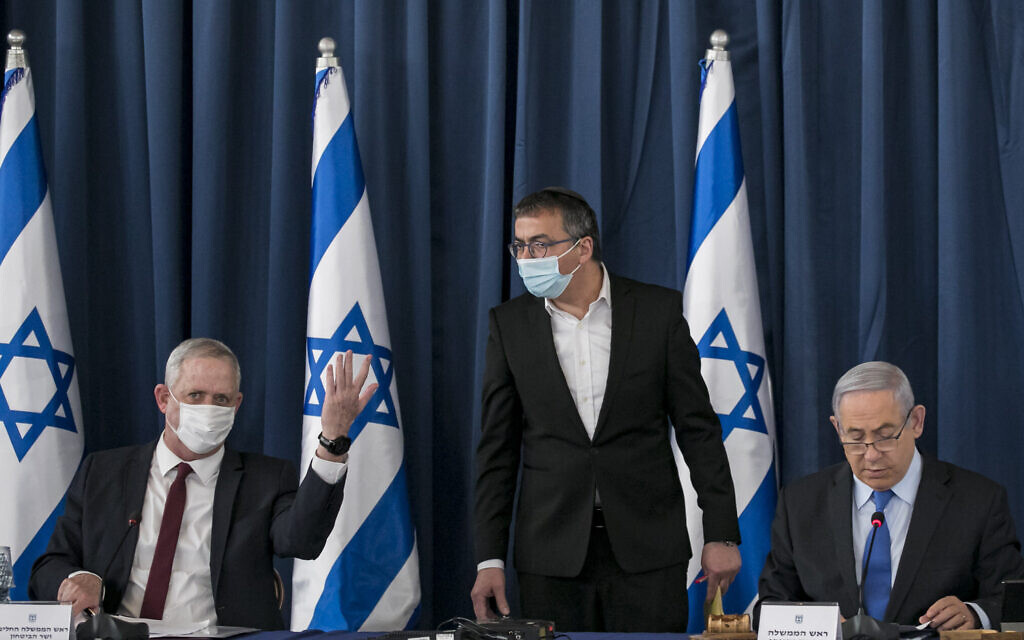 Collision course: Reports of shouting between Netanyahu, Gantz at meeting

"From day one, you did not intend to abide by the agreement regarding a two-year budget," Gantz accused the premier. Netanyahu replied with a stinging barb: "Can someone turn up the volume, we can't hear."

Earlier in the day, Israel Hayom reported that ‎a Likud official offered a somber summary: "The cooperation between Netanyahu and Gantz is over."  ‎

The pot had been boiling from the previous night when the two parties blamed the other for failing to set an agenda for the weekly Cabinet meeting, highlighting the widening cracks that could lead to the coalition's collapse and new elections.

“The cabinet will not convene … due to Blue and White’s refusal to include on the agenda a governmental 8.5 billion shekels [$2.5 billion] economic aid program of the prime minister and finance minister to grapple with the coronavirus crisis,” Likud claimed in a statement.

Blue and White charged that the meeting was called off “due to Likud’s insistence on not adhering to the coalition agreement. This is not the first time Likud has not stood by its commitments, and every other excuse is a complete lie to the Israeli public."

While insisting he was doing its best to keep the government unified, Gantz said, "we want a state budget and they want a political budget."

If a budget is not passed by Aug. 25, the government automatically dissolves.

Netanyahu is balking at honoring a provision in their coalition agreement to craft a two-year spending plan. If no budget is approved by that deadline, or the law isn’t amended, parliament will be dissolved and a fourth election in less than two years will be held.

A two-year spending plan would deny Netanyahu the ability to bring down the government over the budget next year before Gantz is to take over as premier in November 2021 under their rotation deal. Likud says officials have to move quickly on the budget to anchor the virus-battered economy and that drafting a one-year plan alone would take less time."

A budget for 2020 has not been passed since the country held to three elections in one year without resulting in a stable government.

Nevertheless, according to a poll by Israel's Channel 12, Netanyahu's Likud would lose only one seat if elections were held now.

"The ruling party stands at a poll of 31 seats, one less than they had in a poll conducted here about two weeks ago," Channel 12 reported. "Far behind is Atid-Telem (the main opposition party) with 18 seats, two more than Yamina's Naftali Bennett. In January 2019, before the April election, Bennett submitted only 17 names to the Central Election Commission and ultimately did not even pass the minimum threshold percentage to enter the Knesset."

The question remains whether Netanyahu would be able to build a coalition or if his fellow right-wing parties will aim to build a bloc of their own without him at the helm.