JERUSALEM—As dangerous as the world looks right now, this is nothing compared to the darkness that will fall if U.S. President Joe Biden signs a flawed nuclear deal with Iran and does not move faster to arm Ukraine to defeat Russian Vladimir Putin.

That’s the sober assessment of Congressman Doug Lamborn, a leading expert on U.S.-Israeli relations and a member of the House Armed Services Committee.

Lamborn, and his wife, Jeannie, are both devout Evangelicals themselves.

They visited Israel in late March to meet with fellow pro-Israel legislators and parliamentarians from around the world and assess the latest trend lines in the Middle East and around the globe.

I’ve known the Lamborns for years – we first met when I learned that they are readers of my novels and nonfiction books – and was honored to have dinner with them at the King David Hotel in Jerusalem.

The congressman told me he is deeply worried that Biden is going to sign a terribly flawed nuclear deal with Iran, remove the Islamic Revolutionary Guard Corps (IRGC) from the U.S. government’s Foreign Terrorist Organization list and lift economic sanctions off of the Iranian regime.

That, he warned, could flood Tehran’s coffers with $100 billion in new capital they could use to complete their nuclear weapons program, and arm their terrorist proxy forces throughout the region.

At that point, he said, “Israel will have no choice but to take military action.”

Lamborn is also deeply worried that many in Washington – Biden included – have badly misjudged the character and motives of Putin and aren’t doing nearly enough to arm the Ukrainians.

If Putin isn’t defeated in Ukraine, Lamborn made clear to me both during dinner and during our formal interview, then the Russian dictator will be emboldened to go after other targets.

He asked Christians to pray for leaders in Washington to have the wisdom to know how best to deal with Iran and Russia, and to stand with Israel. 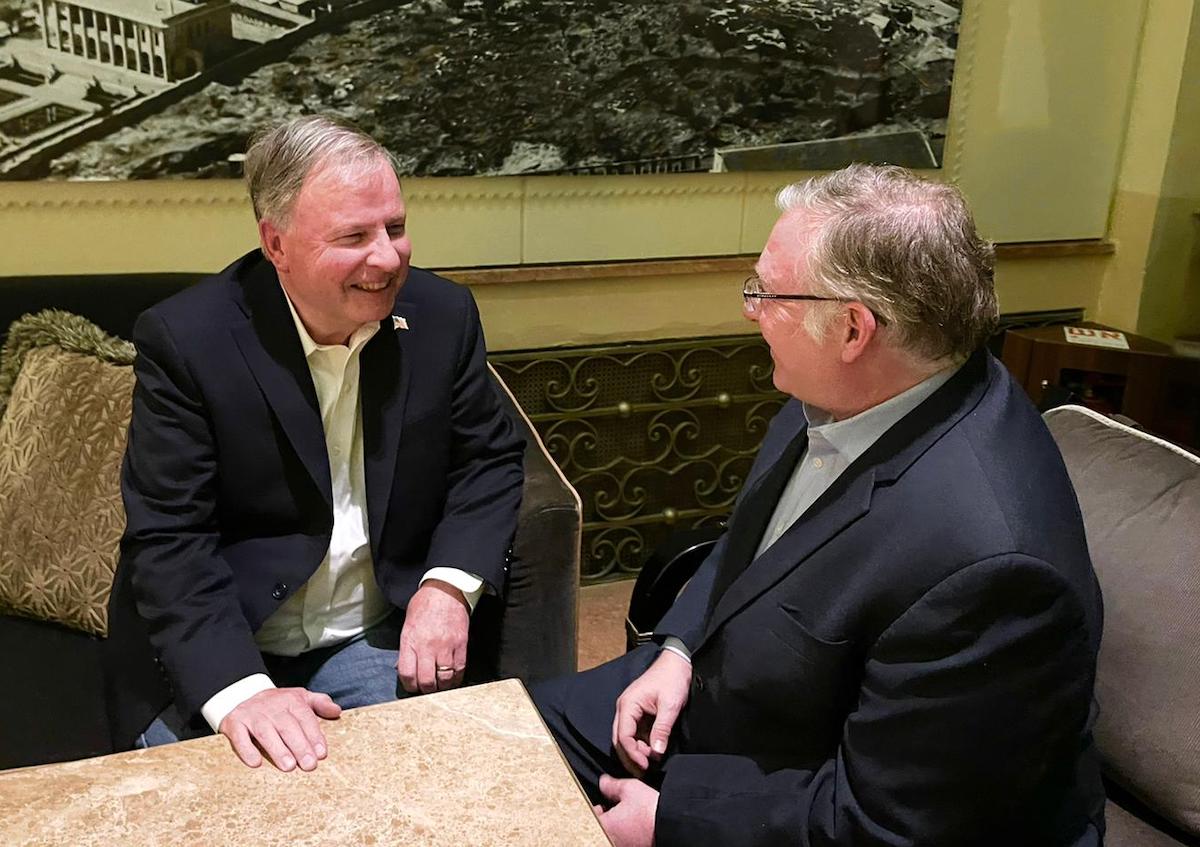 I commend his full comments to your attention.

Here is a transcript of part two of our interview, lightly edited for clarity.

ROSENBERG: Congressman, you're here in Israel at a time when the Biden administration seems to be very close to finalizing a deal with Iran, a new nuclear deal. But there's also quite a bit of talk right now that the Biden administration is actively considering removing the Iranian [Islamic] Revolutionary Guard Corps from the U.S. government’s Foreign Terrorist Organization list. What do you know? What have you heard? What is your view on this?

REP. DOUG LAMBORN: This is very troubling, Joel. If we lift sanctions on Iran, the projections I've heard is that it's like giving them $100 billion. They can start selling oil to anyone they please at high prices currently, and they will have no incentive to stop their fomenting of terrorism in the Middle East region.

They are the biggest sponsor of proxies of terrorism in the whole world. Look at what the Houthi rebels are doing in Yemen. They're sending missiles into Saudi Arabia that, clearly, they did not construct themselves in their in their mud villages. They got them from Iran. That's the kind of proxy fighting that Iran does.

There will be an arms race also in the Middle East – countries like Saudi Arabia, maybe Turkey, maybe Egypt, will want their own nuclear weapons, and that will increase the instability.

ROSENBERG: You have come to Israel to meet with 20 members from various parliaments around the world who are strongly pro-Israel. And you were the representative from the U.S. Congress to these meetings of the Israel Allies Caucus Foundation. Was there a general common consensus among the group on the Iran nuclear threat, or did you find that you guys were in disagreement on how to view and handle that issue?

LAMBORN: There is total agreement, Joel. Everyone there who was from a different country – from Europe or Latin America or Africa – was very much in agreement that Iran is a dangerous enemy of Israel and cannot be allowed to get their hands on nuclear weapons.

ROSENBERG: I'm so grateful for your time and to have dinner with you tonight here at the lovely King David Hotel with you and your wife, Jeannie. And I’m honored to give you guys a copy of my recent book, “Enemies and Allies: An Unforgettable Journey inside the Fast-Moving & Immensely Turbulent Modern Middle East.” So, in additional to the Iranian leadership, I want to ask you about Russian President Vladimir Putin, because I write about him in some detail in the book.

Putin has been so destructive in his policies in the Middle East, particularly in Syria. I mean, Syria has almost ceased to exist as a sovereign nation state. It is essentially a province of Russia and Iran now. And, of course, Turkey has a huge stake in Syria, too.

Putin, of course, has also invaded Georgia, and Crimea, and the eastern Donbas region of Ukraine in recent years. Now he’s invaded the rest of Ukraine. And he is arming Iran.

As a member of Congress, serving on the House Armed Services Committee, as such a strong friend of Israel, how do you assess Vladimir Putin, and why do you think the world, including many in Washington, got him wrong?

There was such a sense before the invasion of Ukraine that, “Oh, Putin is not really going to do this. He’s not crazy enough to actually invade.” It felt nearly universal. So, how do you assess Putin, and why did the world, including so many in Washington, get him so wrong?

LAMBORN: And, in addition to the countries you name, Putin has also been fomenting trouble in Armenia, and in Moldova. And Belarus now is pretty much a colony of Russia now, right? Putin views all of Russia’s neighbors as an extension of the Russian empire. He doesn’t want any of his neighbors to have independent lives. Putin is so arrogant. He and his advisors want to run all the countries that are surrounding Russia, including neutral countries like Finland and Sweden. That’s why the people of Finland and Sweden are now wanting to join NATO.

LAMBORN: They want to join the people in the Baltics – Estonia, Lithuania, Latvia – who are members of NATO. And Poland, as well.

ROSENBERG: I was just in Estonia, speaking at the Jerusalem Prayer Breakfast in Tallinn, just before Putin invaded. And this was the big topic there. I met with many members of the senior leadership there. They told me they fear that if Putin goes into Ukraine, “We're next.”

How so many people got him wrong [regarding the invasion of Ukraine], I don't understand because he has been dangerous for a long time. You look at what he's done in these various countries that you rattled off – Syria, not the least of those – and also you look at what he's done to internal dissent, how he has killed people who are his political opponents. He's killed them, or poisoned them, and people who have defected to the West. He's gone after them with radioactive poison and assassinations.

So, he is a dangerous and evil man. He's an extension of the old KGB. It is no different than it was under the Soviet Union. And some people have their head in the sand, or they are not a good student of world history, or they just don't have the discernment and insight that they should.

ROSENBERG: What should President Biden and the administration back in Washington, be doing, in your view, to deal with Putin? What kind of grade would you give President Biden at this stage?

LAMBORN: I think there's more that he should be doing. He gets a passing grade because he's done some good things to step up aid to Ukraine. However, it is a case of too little, too late.

We should have been arming Ukraine before the invasion. It took too long, and it’s still taking too long to get our Javelin anti-tank weapons and other weapons into their hands.

ROSENBERG: It seems like many countries in Europe, even small countries, are doing much more, much faster. And Biden so often uses language that indicates that he doesn't want to provoke Putin, even though Putin is devouring the largest military in Europe outside of NATO.

We should allow Poland to give their MiGs to Ukraine. The Ukrainian pilots know how to fly those. Then we could work out a deal with Poland to backfill them with more modern aircraft as a replacement. [NOTE: for our coverage of this “fighter jet fiasco,” please click here]

ROSENBERG: Let me ask you about one other thing related to the Russia-Ukraine war. Former President Trump made a point at CPAC a few weeks ago that Putin has invaded countries on every president's watch except his. Of course, Trump was widely blasted during his tenure for being too weak towards Putin. And I will say that in terms of his rhetoric, Trump was oddly soft toward Putin. He was tougher on his own Attorney General, Jeff Sessions, than he was on Putin. That said, in terms of policy, I think Trump was actually pretty tough on the Russians – expelling Russian spies, spending more on U.S. defense, pushing NATO countries to spend more on their own defense.

But I thought Trump made a fair point at CPAC.

So, let me ask you as we wrap up: Why do you think Putin didn't invade any new country during the Trump years, when he did under George W. Bush [the Republic of Georgia], and did under Obama [Syria, Crimea, and the eastern Donbas region of Ukraine], and he has now under Biden?

LAMBORN: The liberals have pushed a false narrative that Trump somehow had secret agreements with Russia or was a Russian agent, and that’s why Putin didn’t invade anyone during the Trump years in office. That is totally ridiculous. Those allegations [of Trump collusion with Putin] were fabricated. You can’t just make things up. The facts that have emerged in recent years have proven that to be true [that Trump wasn’t colluding with Putin.]

LAMBORN: Exactly. That investigation proved it wasn’t true. If the mainstream media was doing their job, they would show that to the American people.

What is really happened is that Putin respects strength. He respects resolve, and backbone, and willpower. And Obama didn't have that. Biden certainly doesn't have that now. But Trump did have that. And that's the difference.

ROSENBERG: Well, it's a sobering world. You’re a member of the House Armed Services Committee. You're an Evangelical Christian. So, you know first-hand that it's a dark world right now. How can we be praying for you and for the leadership in Washington, on both sides of the aisle? What's the right way to pray for Congress and the President and the administration?

LAMBORN: Well, anyone out there listening to this news channel, I want them to know that their prayers are much appreciated. Pray for our protection, and pray that we are wise and do the right thing collectively as a Congress and as a country. And pray that we have a solid relationship with Israel. I think that's important. Israel needs all the help they can get.

ROSENBERG: Thank you so much, congressman. It's great to see you.