Ashkenazi’s visit coincides with the Egyptian government’s efforts to advance and secure a long-term ceasefire between Hamas and Israel after the recent 11 days of war that ended on May 11 – largely due to Egyptian mediation. Like Israel, Egypt is interested in a politically stable and peaceful Gaza. As a direct offshoot from the fundamentalist Egyptian Muslim Brotherhood, Hamas is viewed as a threat by Cairo.

Egypt’s Foreign Minister Sameh Shoukry invited Ashkenazi to Cairo to discuss the ceasefire and also the growing bilateral relations between Egypt and Israel. The two discussed how humanitarian aid can be provided to Gaza without assisting Hamas’ efforts to rebuild its military capabilities after the recent war. Ashkenazi stressed that rebuilding Gaza depends on Hamas’ willingness to return the remains of the late IDF soldiers Lt. Hadar Goldin and St. Oron Shaul and the two Israeli civilians Hisham al-Sayed and Avera Mengistu.

“We will not allow a situation in which the rebuilding of Gaza lets Hamas rebuild its terrorist capabilities and without solving the issue of returning the captives and MIAs,” the Israeli foreign minister said.

Talks to focus on 🇮🇱🇪🇬 relations & the aftermath of Op 'Guardian of the Walls'. FM Ashkenazi will reiterate Israel's commitment to the return of its MIA’s & hostages held by Hamas. pic.twitter.com/QPapLgV5x8

Despite being an impoverished country, Egyptian President Abdel el-Sisi has so far pledged $500 million in assistance to rebuild the Gaza Strip.

The Egyptian and Israeli foreign ministers both stressed the need for strengthening the Palestinian Authority (PA), led by Mahmoud Abbas, at the expense of the more radical Islamist terrorist organization Hamas.

However, Ashkenazi stressed that “the continued incitement by the PA and their actions in international institutions” against the Jewish state, such as Ramallah’s recent war crime lawsuit against Jerusalem in the International Criminal Court, “are a significant obstacle to diplomatic talks and trust-building steps in the field.” 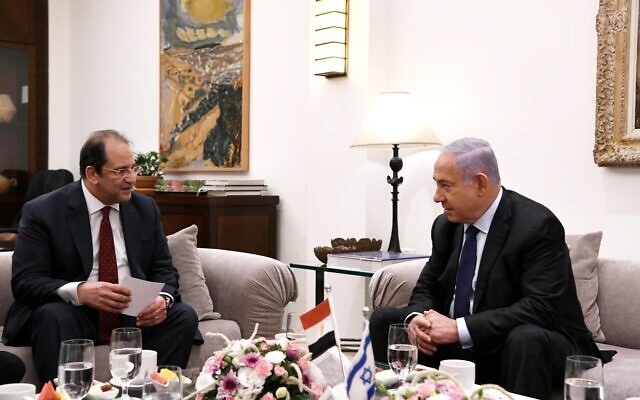 Netanyahu and Kamel discussed how to strengthen bilateral relations between Egypt and Israel. Netanyahu also demanded that Hamas return Israeli captives held in Gaza as part of a long-term truce with the Gaza-based terrorist group.

Each side praised the joint effort on various diplomatic and security related issues that have been beneficial to both Egypt and Israel. During his visit to Israel, Kamel will reportedly also discuss the situation in Jerusalem and address ways to reduce tensions in the Old City in general and around the al-Aqsa Mosque in particular. Kamel will also urge Israel to forgo the controversial eviction of Arab families in the Sheikh Jarrah neighborhood in East Jerusalem.

An unnamed Egyptian official who accompanied Kamel to Jerusalem emphasized that “the role of the Palestinian Authority is central in the talks.”

“Egypt is seeking to have [the PA] deeply involved in the reconstruction process,” he added.

With a population of approximately 100 million, Egypt is the most populous country in the Arab world and an important regional power in the Middle East. After fighting four wars against Israel in 1948, 1956, 1967 and 1973, Egypt – under the late President Anwar Sadat – became the first Arab country to sign a historic peace agreement with Israeli Prime Minister Menachem Begin in 1979.

Despite more than four decades of formal peace, relations between Jerusalem and Cairo have been cold for many years. However, under the leadership of the current Egyptian President el-Sisi, relations have recently improved considerably, especially in areas of security cooperation. In addition, Egypt has become a major importer of Israeli offshore gas.