JERUSALEM — After almost a full year of lockdowns, schools being shuttered, separation from friends and family, masks and social distancing, most people are seeking any shred of normalcy or joy they can grasp on to during the holiday season.

But despite everything else in the world being turned on its head, one tradition has remained in Jerusalem: Santa Claus.

“The thing that the children were missing was to see Santa Claus, to hug Santa,” Issa Kassissieh told All Israel News. 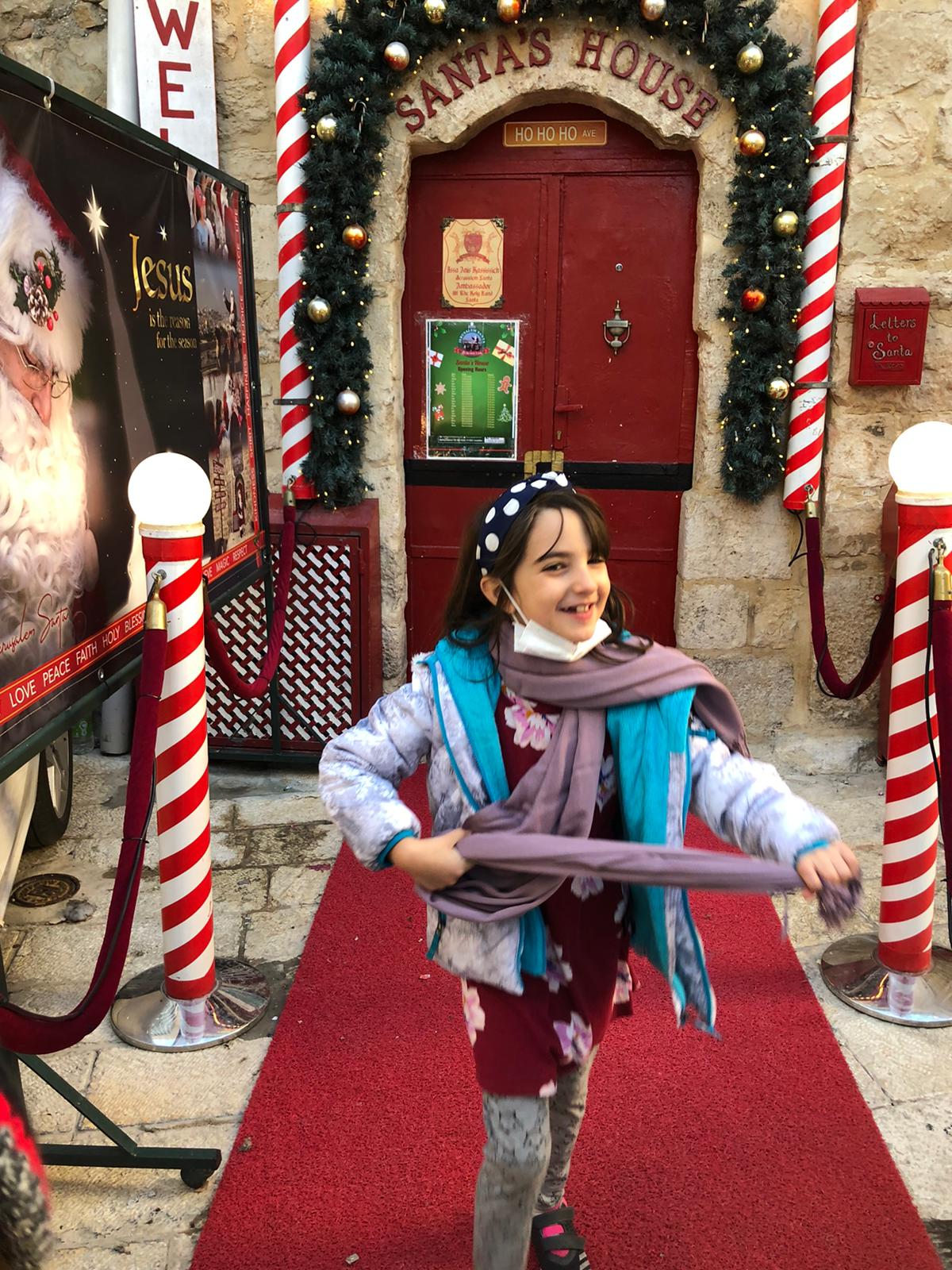 Children leave Santa's House in Jerusalem with a smile on their faces. (Photo: All Arab News)

Kassissieh, known as Jerusalem Santa, has transformed his Old City home into the North Pole and, for years now, every December, children from around the country (and from around the world in previous years) line up outside his door for a chance to sit on Santa’s lap.

Even with the coronavirus still active in Israel and no tourists in the country, lines of children eager to catch a glimpse of Baba Noel this year — from Arab Christians to curious Jews and many Russian immigrants — stretched down Santa Lane and around the corner.

It is a Winter Wonderland in the alley ways of the Old City between Jaffa Gate and New Gate in the Christian Quarter. Christmas music is piped through speakers. Candy cane poles and a red carpet usher one toward Santa’s workshop. And inside, a life sized sleigh at the entrance waits to ferry Santa around on Christmas Eve.

A large sign outside the door reminds those who enter that “Jesus is the reason for the season.”

And once the children cross the threshold into Santa’s workshop, COVID dissipates like a distant thought. In the Old City’s “North Pole” they shed their fears, and their masks, for a photo with Santa.

In some ways, it is a form of therapy. Kassissieh said he can see the effects of COVID lockdowns on the children he received this year — children who are more anxious and stressed than ever.

“We’ve never had this situation before,” he said. “My message for the children is to bring them love and peace. Even if I can’t give them a hug, I still give them the message by them seeing me and by talking to them. That makes me happy to make them happy. Because, really, they are stressed. Especially in Jerusalem.”

The kids usually warm up quickly and tell Santa what they want for Christmas.

“I can see the change in their mentality,” he said. “It’s like it lowers the stress, and makes them healthy. I feel that it's helps help them to succeed, and have hope for the future.”

This year, Santa wears a mask, albeit a clear plastic one so as to not obstruct his curly white beard, and offers hand sanitizers on site while his elves — or workers — remind people to stand 2 meters apart as they sell mulled wine and Christmas chocolates. Kassissieh observes COVID protocols, washes his hands frequently (even though he wears gloves) and changes his suit between visits.

“Even if I cannot give them a hug, I still give them the message by them seeing me and by talking to them. And that makes me happy to see them happy, because really they are stressed, especially in Jerusalem,” Kassissieh said.

The week leading up to Christmas, Kassissieh teamed up with the men and women’s De La Salle basketball teams at Augusta Victoria Hospital to bring gifts to children in the cancer ward. The Palestinian Bible Society co-sponsored the outreach.

De La Salle Cares is a new initiative founded by Tawfiq Richard Rafidi, coach of De La Salle basketball club, to reach out to the community through sports.

"Sports and education help to develop character and contribute the values of giving and volunteering that have become obsolete in our time," Rafidi said. "Sports is not winning or losing or winning titles and crowning championships, but rather a message of giving and supporting others."

With the threat of a fresh lockdown looming over the nation in late December and no clarity as to whether it would affect the holidays or close school, people crammed into the Old City for the last weekend of normalcy. Visiting Santa was clearly high on their list.

“We give hope for them, you know,” Kassissieh said. “And my message for the children is to bring them love and peace.”