Archaeologists have unearthed a Jewish ritual bath dating back to the late Second Temple period, the Hebrew University of Jerusalem announced Wednesday.

The ritual cleansing bath, known in Hebrew as a mikveh, was discovered in a private villa reminiscent of those described by historian Josephus Flavius as belonging to the Holy City’s elite.

“During the Herodian period, the area in question was home to the city’s wealthiest residents,” explained Hebrew University’s Michael Haber, who led the excavation with Dr. Oren Gutfeld. “While several other ritual baths have been unearthed in the area, the importance of this particular discovery stems from its striking proximity to the Temple Mount—raising the question of who lived in this grand villa on the eve of the city’s destruction. It may well have been a priestly family.”

During the time of the temples, priests immersed themselves in the mikveh before carrying out their holy work. Today, some men still use these baths, especially those engaged in religious work. Orthodox religious women use them once a month, seven days after the end of their menstrual cycle.

The mikveh was discovered as part of excavations that began in February 2021 to provide handicap access between Jerusalem’s Old City and the Western Wall. The excavations were funded and spearheaded by Israel’s Ministry for Jerusalem Affairs and the William Davidson Foundation, and spearheaded by Company for the Reconstruction and Development of the Jewish Quarter of the Old City of Jerusalem.

The Western Wall, which sits below the Temple Mount in the heart of the Old City of Jerusalem, is one of Jews’ holiest sites. Tens of thousands of people pray there on Jewish holidays – especially the three Jewish pilgrimage holidays of Sukkot, Passover and Shavuot – and thousands pray there daily throughout the year. 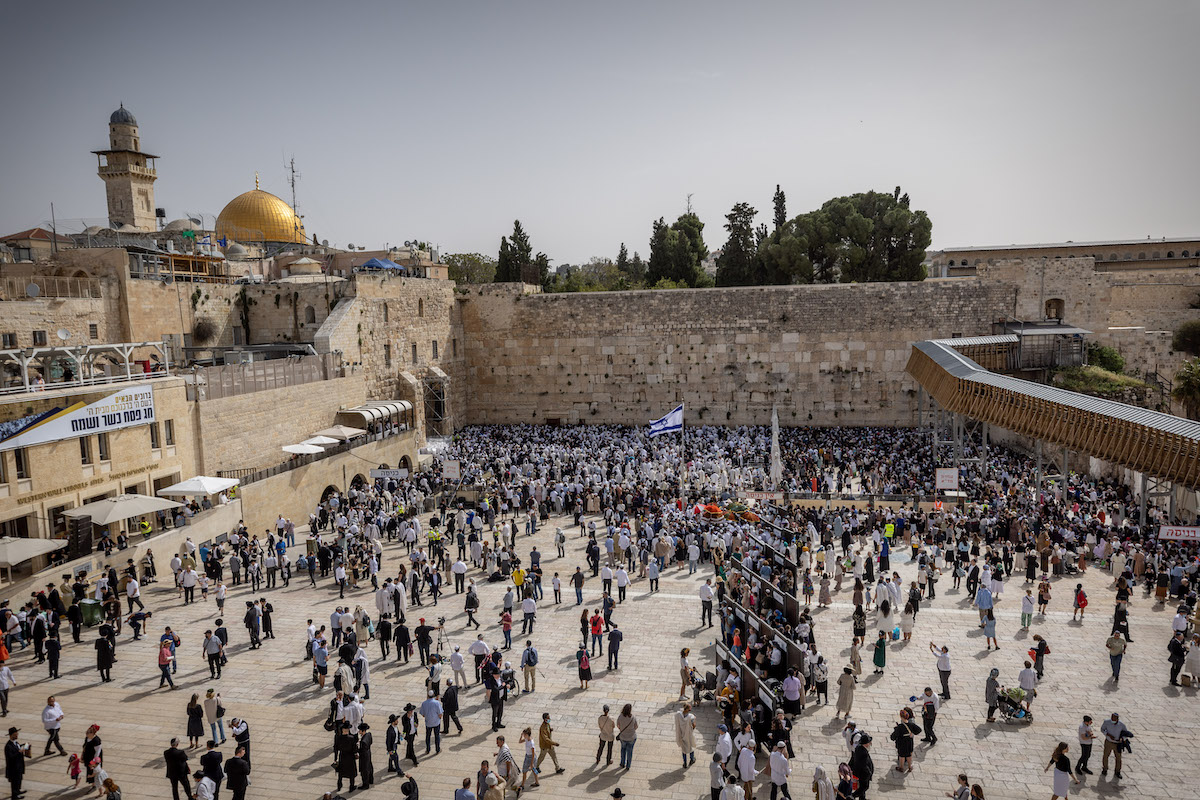 Jewish worshippers cover themselves with prayer shawls as they pray in front of the Western Wall, Judaism's holiest prayer site, in Jerusalem's Old City, during the priestly blessing at the Jewish holiday of Passover, April 18, 2022. (Photo: Yonatan Sindel/Flash90)

However, to get to the site from the Jewish Quarter, one has to walk down nearly 150 steps.

In 2017, the Company for the Reconstruction and Development of the Jewish Quarter of the Old City of Jerusalem received a permit to install two elevators to make the wall more accessible to visitors. However, the project has taken longer than expected, as researchers quickly discovered layers of archaeological gems.

The most recent reports said the elevators are expected to be up and running by 2025.

The private villa in which the mikveh was discovered was hewn into the bedrock and featured a vaulted ceiling with fine masonry, which researchers said is typical of the Herodian period. The villa is located at the top of a cliff in the “Upper City,” which Josephus Flavius said housed the city’s elite population.

There were several other relics discovered in the course of the excavation, including a fragment of a late Byzantine-period ceramic oil lamp that may have been purchased by Christian pilgrims thronging to the city around the 6th or 7th century A.D.

The lamp is inscribed in Greek with the words, "The Light of Christ shines for all." Researchers said that this phrase may have its source in the ceremony of the Holy Fire, part of the Orthodox Easter celebrations in the Church of the Holy Sepulchre. 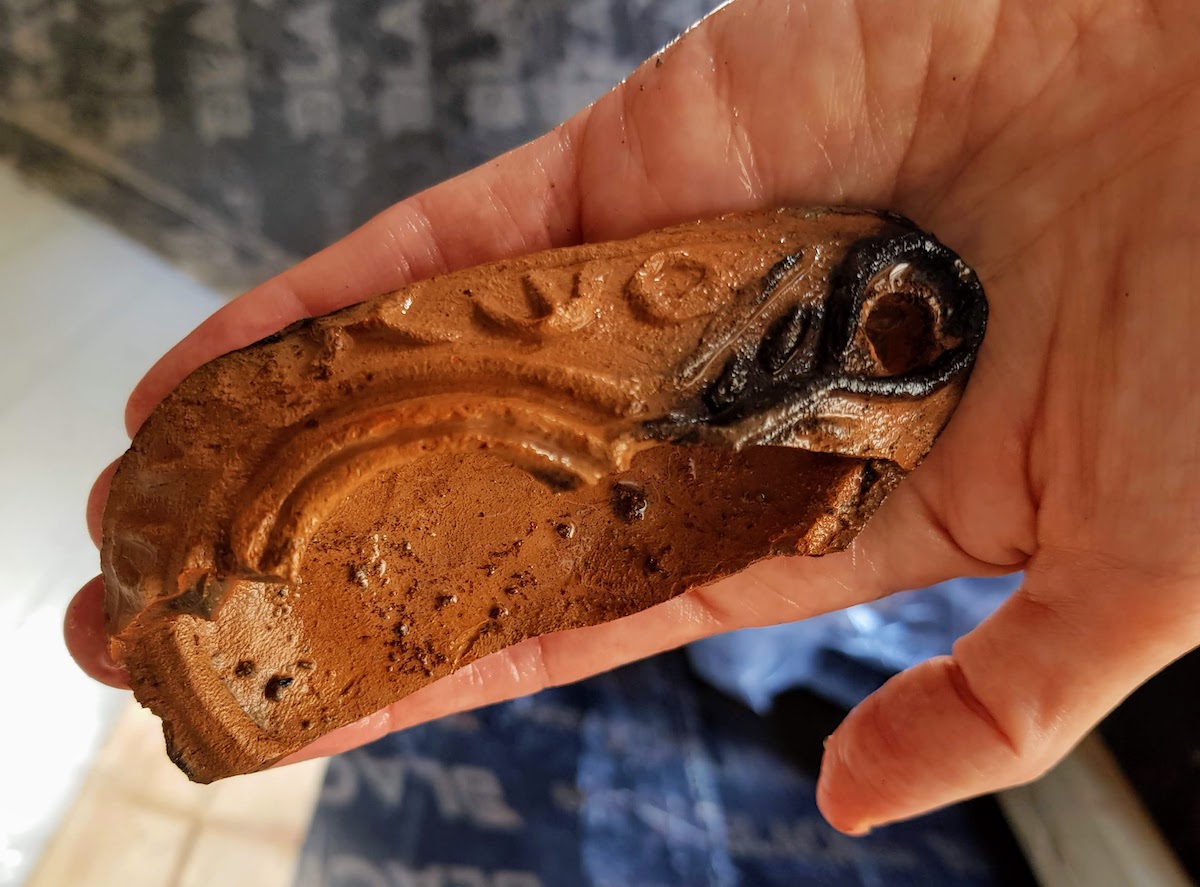 A fragment of a Byzantine-period (“Hierosolyma”) oil lamp with remains of a Greek inscription “The light of Christ shines for all” (Photo: Michal Haber/Hebrew University)

Artifacts from water cisterns to cooking pots dating from the Second Temple, Roman-Byzantine and Ottoman periods, were also found. A highlight was an aqueduct that is assumed to have transported water from Solomon’s Pools near Bethlehem all the way to the Temple Mount during the Second Temple period.

The Second Temple period is considered between 597 B.C. and 70 A.D., when the Temple was destroyed.

“These rare finds … provide proof of a continuous Jewish presence in Jerusalem for millennia,” said Israeli Minister of Construction and Housing and of Jerusalem Affairs Zeev Elkin.

The ritual bath will be preserved and incorporated into the new Western Wall Elevator complex, the Israel Antiquities Authority said.