Andrew Brunson’s message is straightforward, but it is far from simple: The Church needs to brace for a dark wave of persecution that is coming.

Imprisoned for two years on false charges of terrorism in Turkey, the seasoned missionary says he quickly “broke,” lost any sense of God’s presence and became suicidal during his incarceration.

But sobering for those who have ears to hear.

Brunson and his wife Norine – who had been missionaries in Turkey for 23 years prior to the arrest – were in Israel this month for the International Christian Embassy Jerusalem’s Feast of Tabernacles celebration where Brunson taught what he believes Christians must know in order to face trials and tests that are sure to come.

In an interview with ALL ISRAEL NEWS, Brunson said this is not the message he prefers to carry but it is the one God gave him. He foresees a cultural and social persecution coming to the United States in which the exclusivity of Jesus as the only way to salvation will become a controversial stance.

“Most of the institutions of society are supporting things that a faithful follower of Jesus cannot embrace… and that’s how they will justify persecuting us,” Brunson said.

Believers who stand for this truth will be marginalized in schools, jobs, banks and more, he added. Testing believers’ resolve, the pressure to conform will manifest socially and eventually financially.

“What has emerged as the main flashpoint is gender identity and LGBT. And wherever that is intersecting with religious freedom, LGBT is winning,” he said. “Now there is a requirement that people not only tolerate, but that we embrace and celebrate this ideology. And if you don’t, you are seen as someone who is hateful.”

The younger generation of believers and even many churches are shying away from these issues, Brunson said, “not (only) because it will bring pressure from outside but because it will divide the church. There is already a measure of deception in the Church.”

“The church is pulling back on teaching truth, the next generation is going to be confused,” Brunson warned.

“In the States, we have an issue where it is a majority-Christian culture with Judeo-Christian values,” he said. “But our culture is post- and anti-Christian. Do we fight this and try to continue to have influence? This is where the real tension is right now.”

One of the difficulties will be persecution couched in false accusations of hatred and bigotry rather than directly connected to one’s faith. In Brunson’s case, he was slapped with false political charges.

“When I was in Turkey, if they had said, ‘Andrew Brunson is a church planter,’ I would have worn it with pride. Instead they said, ‘He’s evil and he’s a terrorist,’ so I was made into a hate figure,” he said.

“People who are going to remain faithful are going to be seen as a people of hate. The same thing happened to Jesus. They said He was demonic, and eventually they killed Him.”

WHAT HAPPENED IN TURKEY?

Brunson was swept up in a crackdown on activists and military leaders who were accused of attempting to overthrow Turkish President Recep Tayyip Erdoğan in 2016. Norine was also arrested and released after two weeks. Their children – all in America at the time – had no news from their parents at the beginning. In the subsequent two years, Norine remained in Turkey since she was the only person allowed to visit Andrew in prison.

Initially facing not one or two, but three life sentences, and despite experiencing prior persecution in other forms as a missionary, Brunson said he was unprepared for the spiritual desert he faced in prison. He was at times placed in solitary confinement and at other times endured isolation as the only Christian among 22 Muslims in a cell made for eight people.

Brunson’s arrest captured the attention of the White House as well as the church. Former U.S. President Donald Trump took personal interest in the case and repeatedly mentioned Brunson’s name in a meeting with Erdoğan. After this initial contact, Brunson said a flood of propaganda was published in the Turkish media accusing him of being an American spy or even the head of the Central Intelligence Agency. 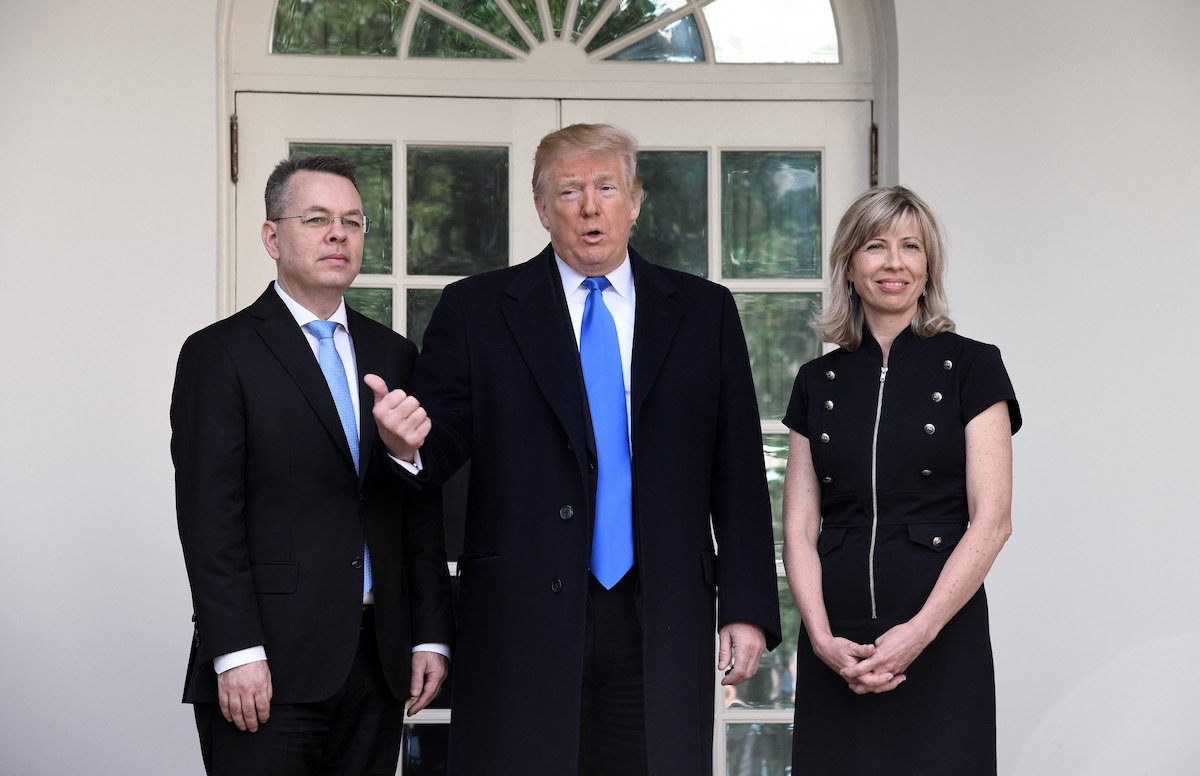 Then-U.S. President Donald Trump poses with Pastor Andrew Brunson and his wife, Norine, outside of the Oval Office of the White House on October 13, 2018 in Washington, DC. (Photo: Olivier Douliery/Abaca Press via Reuters)

Former Vice President Mike Pence, an Evangelical Christian, also kept up the pressure on the Turkish government at the time.

“If Turkey does not take immediate action to free this innocent man of faith and send him home to America, the United States will impose significant sanctions on Turkey until Pastor Andrew Brunson is free,” Pence tweeted in July 2018.

Indeed, the U.S. did impose sanctions. When the Turkish stock market lost $40 million and the nation’s currency, the lira, collapsed, more propaganda sought to blame that on the imprisoned Brunson.

In late July 2018, Brunson was remanded to his home in Izmir, Turkey – where he had led an Evangelical church – to await trial. Then, on Oct. 12, 2018, Brunson was convicted – partially based on the false testimony of long-time acquaintances from his ministry. But in a dramatic finale, Brunson was sentenced to time served.

That same day, he and Norine left Turkey.

“The last thing we said was, ‘We love Turkey,’ It was not a naive love, but more it was us saying that God put His love in us. It is not a love expressed emotionally, but in commitment and wanting to see good come to that nation. We want to see God’s blessing on Turkey, to see people become aware of Jesus. We left Turkey blessing it.”

Brunson believes that God orchestrated his time in jail so that he could teach a message of preparedness to the Church.

“God gave me the assignment to prepare people for hardship,” Brunson told AIN. “It’s not what I prefer to carry, but it’s what He’s given me.”

Recently, Brunson filmed a teaching series called “Prepare to Stand” in which he shares lessons that he hopes will help believers survive a coming wave of persecution. (Here is the full series on Family Research Council.)

Brunson said Daniel 11:32 is critical, but must be taken in the correct order: “…but the people who know their God shall be strong, and carry out great exploits.”

“It is not the time to think about the exploits,” Brunson said. “Focus on that first part – otherwise you’re not going to be standing to do the exploits and the assignments that God has for you in a much darker environment.”

In his teachings, both in his videos and during the Feast of Tabernacles here in Jerusalem, Brunson emphasized he was surprised he broke so quickly, to the point he even questioned God’s existence.

“I made it a discipline to declare, ‘God, You exist,’” he recalled. 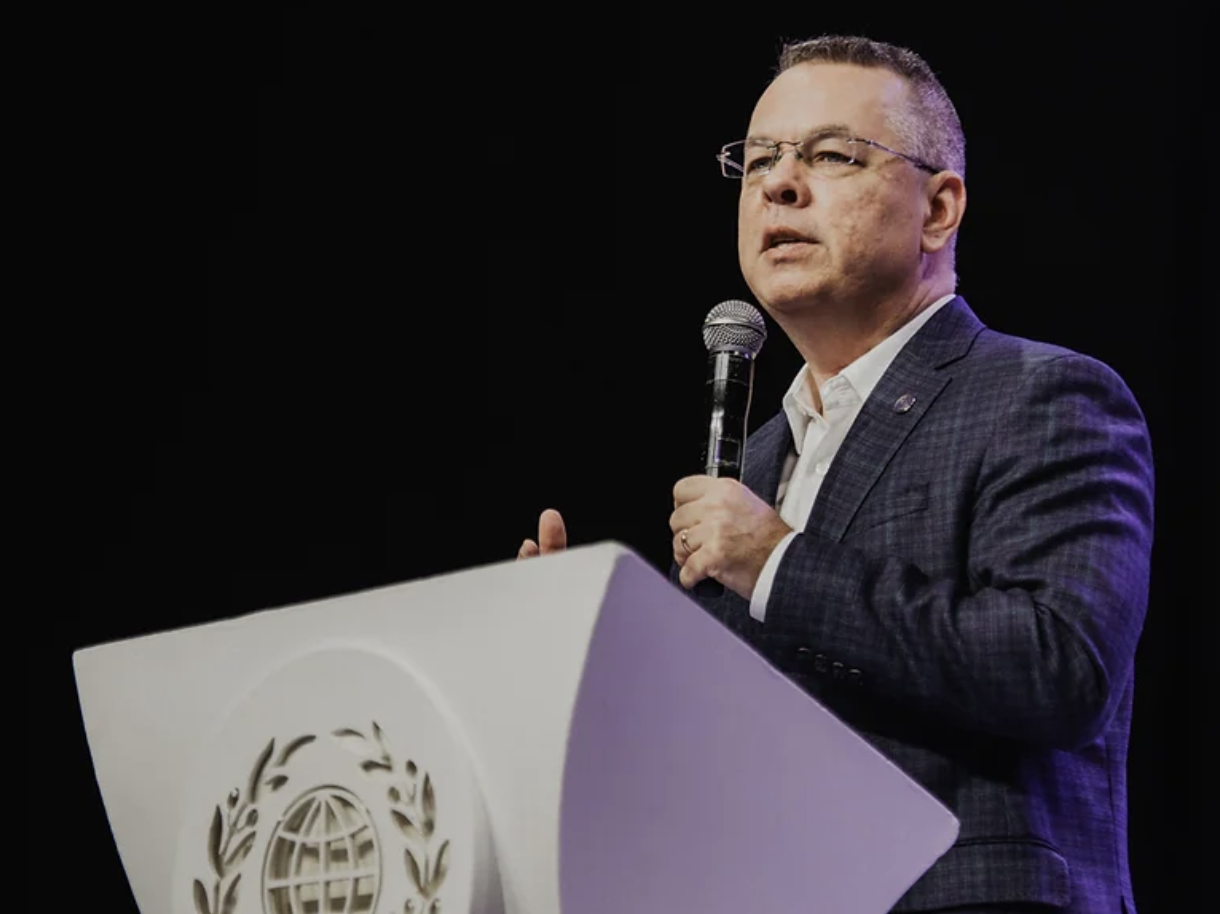 Brunson also made it a discipline to pray, worship and declare God’s faithfulness each day. He also had to come to terms that God’s will may not have included his release from prison.

Two major factors he faced in prison included dealing with an ever-present fear and being offended at God.

“The reaction is to become distant from God, to have the heart grow so cold you lose the relationship,” Brunson said.

But if we focus on preparation of the heart now, we will more likely be more victorious over persecution, Brunson said. And that includes aligning our hearts and determine to stand for God’s moral standards which “now are seen as harmful to society.”

At the Garden Tomb on Saturday, Brunson taught that there is a side of Jesus we cannot know without partaking in the fellowship of His suffering.

“There is a difference between real love and an unproven love,” Brunson said.

God required Brunson to prove his love by staying faithful even when he felt abandoned by Him, he taught at another seminar during the Feast.

“As we head into a time of great turbulence and face difficulties and tests, He will shepherd your heart. Lean into Him because He is committed to taking you through,” he said.