JERUSALEM—A group of lawmakers in Washington are growing increasingly worried that the Biden administration is poised to reduce or remove economic sanctions from Iran in order to persuade Tehran to re-enter the 2015 nuclear deal.

These would be dangerous and unwise concessions to the worst terror regime on the planet, say the lawmakers, who have in response introduced a bill known as the “Iran Sanctions Preservation Act.”

Sen. James Lankford, the Oklahoma Republican, is the author of the legislation.

“The legislation requires that the U.S. maintain current sanctions targeting Iran’s oil industry, financial sector, and supporters of terrorism until Iran suspends all of its destabilizing terrorist activities,” noted a statement from Lankford’s office.

“The bill would ensure sanctions remain in place until strict conditions are met by Tehran to suspend both its nuclear program and support for terrorism,” the statement added. “The bill also expresses support for the people of Iran, who are the greatest victims of the regime’s destabilizing activities.”

Pompeo led the Trump administration’s efforts to withdraw from the Joint Comprehensive Plan of Action (JCPOA) and impose aggressive sanctions on Iran.

Pompeo is visiting Israel this week, which includes a retirement party for the outgoing director of the Mossad, an organization whose leaders are also deeply concerned about the Biden approach towards Iran.

“President Trump’s ‘Maximum Pressure’ policy and crushing sanctions denied the Iranians the resources they needed to support building a nuclear weapon or to support terrorism around the globe,” Pompeo said. “America and our ally Israel and the world are safer because of the sanctions on Iran. I’m proud to support the legislation Senator Lankford and his colleagues are introducing to ensure we stick to the U.S. sanctions on Iran and never allow Iran to obtain a nuclear weapon and stop its terrorist activities.” 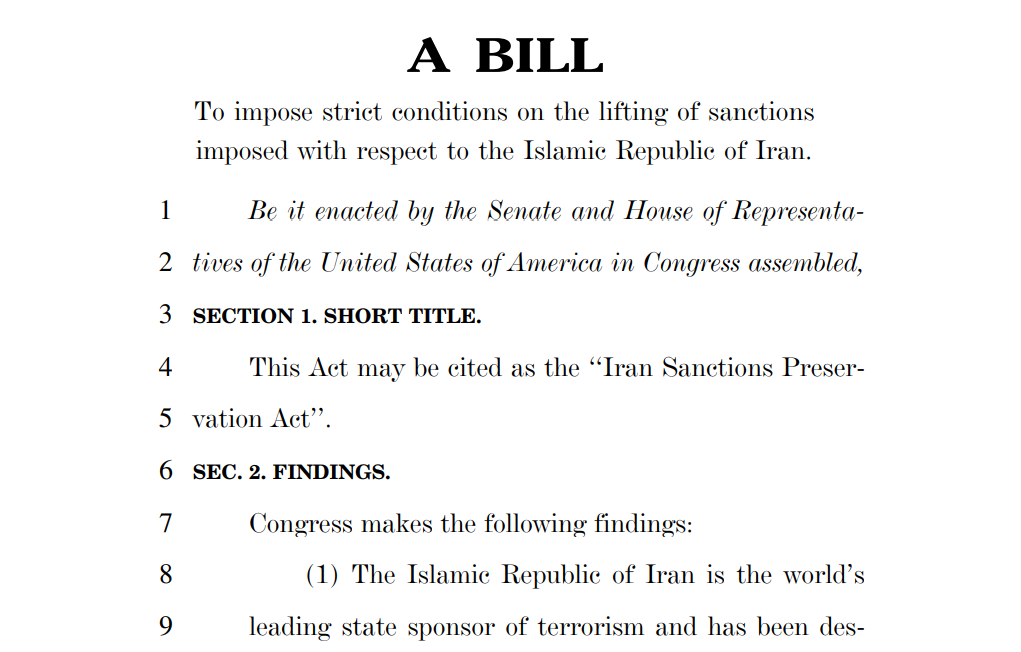 Lankford explained why he has introduced this bill.

“Iran, the world’s largest state sponsor of terrorism, remains a significant national security threat to the U.S. and to our ally, Israel,” he said.

“President Biden and his envoys continue to negotiate with Iran, even while the Iranian regime is obviously supporting terrorism, most recently backing Hamas against Israel,” Lankford added. “I am very concerned by the Administration’s attempt to separate the concerns about Iran’s nuclear ambitions from our concerns about Iran’s flagrant support for terrorism; they are both a part of Tehran’s strategy of destabilization. Focusing only on the nuclear threat and ignoring Iran’s support for terrorism will lead to more chaos in the Middle East, not less. Congress must act to preserve the ‘maximum pressure’ approach and prevent the Biden Administration’s strategy of appeasement.”

One of the lead co-sponsors of the bill is Sen. John Cornyn, the Texas Republican.

Cornyn said, “The United States cannot ignore Iran’s role in worldwide terror and proxy wars at the expense of its own people and our allies in the Middle East. By ensuring the current sanctions against Iran will continue, this legislation would address both Iran’s nuclear threat and its support for terrorism, unlike the Iran Nuclear Deal.”

“The world has seen the atrocities perpetrated by the Iranian regime time and time again, yet President Biden is willing to stake global stability on Tehran’s word,” said Scott. “Unfortunately, words are meaningless without action. To re-enter the flawed Iran Deal as it currently stands would be to turn a blind eye to all who suffer from the Ayatollah’s state-sponsored terrorism. The Iranian people – and the people of the world – deserve better.”

The Biden Administration is currently in talks with the Iranian regime on a pathway to re-enter the Iran Nuclear Deal negotiated by the Obama Administration, which did not address Iran’s support for terrorism or end its nuclear program.

Earlier in May, Lankford and a number of Senate colleagues wrote a letter to President Biden, urging him to stand with Israel and withdraw from its negotiations with Iran in the wake of attacks from Gaza.

Lankford also penned a letter to the international business community warning them against resuming business with Iran, his statement noted.