JERUSALEM – As Israeli politicians and their campaign strategists intensify their hunt for every possible vote ahead of the March 23 elections, there is one group in Israel that the parties do not appear to be actively courting.

This is a mistake. There are 200,000 followers of Jesus in Israel. When every vote count, so should theirs.

Indeed, a party with a clearly-defined policy agenda that would truly and specifically benefit the Christian community, and that proactively reaches out to this community, could potentially win over a pool of voters that has been largely ignored over the years.

Israeli Arab Christians traditionally vote for the Joint List of Arab parties in the Knesset, some of which are Islamist and even Communist. But these parties do not specifically cater to Christians or their needs as a community.

Obviously, Christians care about the same issues their fellow Israeli citizens care about.

They want to end the pandemic in a smart way, without violating people’s privacy and civil rights.

They want to see the economy reopened quickly, see lots of new jobs created and see the government help businesses – especially small businesses – get back on their feet.

They want taxes to be reduced and housing to be more affordable and the country to be protected from Iran, Hezbollah, Hamas and other radicals.

That said, there are other important issues Christians care about. Among them:

While there is a range of other issues important to Christians, let me focus on two.

IT’S TIME TO APPOINT AN AMBASSADOR TO THE CHRISTIAN WORLD

The next government should create a new position: “Ambassador to the Christian Community.”

At a Christian Media Summit that I attended several years ago, organized by Israel’s Government Press Office, Prime Minister Benjamin Netanyahu promised to make such an appointment. Unfortunately, he never followed through.

While the history of Jewish-Christian relations has had painful eras, Israel has drawn the growing sympathy and affection of Christians around the world since its dramatic, even prophetic, rebirth in 1948.

Some Israeli leaders have proactively sought to defuse tensions and build warmer ties with Christians holding a wide variety of theological positions. Remarkably, however, Israel does not have a single senior-level emissary assigned to handle the Christian portfolio.

It’s time to change that. 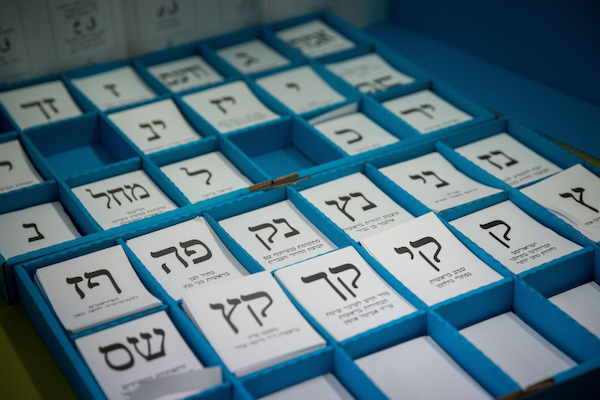 Voting notes at a voting station in Jerusalem, during the Knesset Elections on March 2, 2020. Photo by Yonatan Sindel/Flash90

In a world of some 7.3 billion people, fully 31% are self-described followers of Jesus of Nazareth. That represents a global Christian population north of 2.2 billion people, including more than 600 million Evangelical Christians.

That makes Jesus – known in Hebrew as Yeshua – the world’s most famous and beloved Israeli.

It also makes the New Testament the bestselling Israeli book in the history of mankind.

The vast majority of Christians have a deep love for the land of Israel and its rich biblical history. Many “pray for the peace of Jerusalem,” as commanded by the Psalmist.

Far more Christians than Jews visit Israel. In 2018, fully 61% of tourists to Israel were Christians.

For most, it is a lifelong dream to visit the Holy Land and walk where Jesus and the prophets and apostles walked.

To be sure, not all Christians understand or support the modern State of Israel. But many do – and more could. A full-time ambassador to this enormous and strategic world would help.

Rather than report to the foreign minister, this ambassador should be appointed by the prime minister, serve on the PM’s senior staff and have the PM’s full confidence and support.

He or she must come to be regarded at home and abroad as having the PM’s ear and the ability to get things done in a timely and effective manner.

The position should be backed up by support staff and a travel and communications budget commensurate with the task.

A seasoned, experienced diplomat could do the job, or a communications professional; perhaps a former journalist or broadcaster. However, such an emissary should not be a foreigner but an Israeli citizen. He or she should be a fluent Hebrew and English speaker. Knowing Arabic would be a plus.

The responsibilities of such an ambassador should include:

The next government should also establish a non-partisan Israeli Commission on Religious Freedom and Minority Affairs.

The ambassador to the Christian community should serve as a member of the commission, perhaps even as its chair.

Such a commission should:

Over the past seven decades, Israel has become an increasingly welcome place for Christians from all over the world who want to come and discover the Land of the Bible. That said, there is much more the government can and should do.

Appointing a high-level ambassador to the world’s 2.2 billion Christians is one important step. So is establishing a non-partisan Israeli Commission on Religious Freedom and Minority Affairs.

Will any Israeli politicians – and the parties they lead – embrace such a positive, inclusive agenda and actively campaign for the votes of Israel’s 200,000 Christians?