The decision comes as the Jewish state is experiencing an increase in COVID virus cases due to the contagious so-called Delta variant. The government also decided to restore the indoor mask mandate if the average number of daily cases exceeds 100 during a consecutive week.

Israel registered 111 new coronavirus cases on Tuesday, slightly less than the 125 cases registered on Monday. While infection numbers are still comparatively low, Israel has not experienced more than 100 daily cases since April.

Despite the low numbers, Israeli authorities did not confirm that the situation is under control.

“We cannot say whether the outbreak is under control,” said Coronavirus Commissioner Prof. Nachman Ash.

Israeli Prime Minister Naftali Bennett stressed the importance of protecting Israelis from the Delta variant that has so far reached more than 80 countries worldwide.

“Our goal at the moment, first and foremost, is to protect the citizens of Israel from the Delta variant which is raging in the world. At the same time, we want to reduce as much as possible the disruption to daily life in the country. Therefore, we decided to act as early as possible – right now – so as not to pay a heavier price later on, by taking responsible and quick actions. It is up to us. If we adhere to the rules and act responsibly, we will succeed together,” stated Bennett. 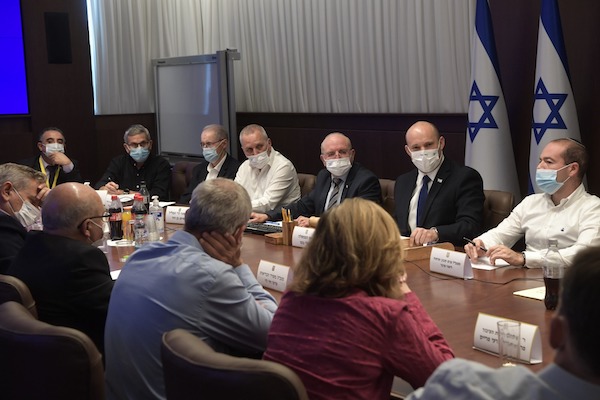 PM Naftali Bennett holds discussion on the spread of the coronavirus with an emphasis on the Delta variant (Photo: Koby Gideon/GPO)

Israeli authorities believe that the Delta variant is responsible for the recent increase in COVID cases in schools in the cities of Modi’in and Binyamina. Approximately 250 students and 50 teachers in Israel have been infected by the virus recently. The Delta variant was brought into Israel from abroad, according to local authorities.

Many tourists and local tour guides are disappointed that the reopening of Israel’s borders has been postponed again. Some are shocked that the Jewish state is facing new COVID cases despite the large majority of its adult population having been vaccinated against the virus.

“I’m not surprised by this outcome, but I’m disappointed because I felt that Israel was untouchable when it came to COVID, and I thought the opening would be on time,” said one tourist, Jamie Hayeem.

At the same time, there seems to be an understanding for the need to protect Israeli society from the Delta variant.

“I’m so sad. I had been looking forward to it, but I’m glad that the country is taking necessary precautions to stay safe,” said a tourist Gaby Danziger.

Israel currently has some 680 active COVID cases. Out of these, 26 are people in serious or critical condition. At the height of the pandemic last winter, the Jewish state had a whopping 85,000 active cases.

Since the new outbreaks have taken place at schools, authorities have recommended the vaccination of all children aged 12-15. On Tuesday, more than 7,000 shots were administered - the highest number in more than a month.

Israel’s Ministry of Health also announced that due to the spread of the Delta variant, individuals could be ordered to enter quarantine, even if they have been vaccinated or have recovered from the virus.

Israel’s Ben-Gurion International Airport is seen as critical to reducing the spread of the virus variant and, therefore, the government has decided to step up testing of passengers.

In addition, Israel currently upholds a travel ban on countries that have been particularly hit badly by the virus, such as Brazil, Argentina, India, South Africa and Russia.