JERUSALEM—Since being sworn in as prime minister of Israel on June 13, Naftali Bennett has not yet done a major interview with a Christian TV network, newspaper, magazine or news site.

Nor has Bennett met with prominent and influential Evangelical leaders.

His predecessor, Benjamin Netanyahu, aggressively and consistently did both, recognizing the immense strategic importance of the world’s 600 million Evangelical Christians to the security and prosperity of Israel.

To some degree, of course, it is understandable that Bennett has not made Christians one of his top priorities – yet.

Yet with a growing track record of initial successes – and Israel finally beginning to re-open to foreign visitors – it is time for Bennett and his government to make outreach to Evangelicals a major priority.

Reinvigorating Holy Land tours by hundreds of thousands of Evangelical tourists and pilgrims from the U.S. and all over the world will significantly boost Israel’s devastated tourism sector, as will hosting Christian conferences and concert in Israel.

Tonight, Bennett will take his first step in this direction.

At 6 p.m. Israel time, the Christian Media Summit begins and the prime minister will make his first address at this annual event held by Israel’s Government Press Office.

Unfortunately, due to COVID restrictions, this year’s summit – the fifth ever – will be held virtually.

However, this is a good opportunity for Bennett to introduce himself to Christian journalists, pastors, ministry leaders and lay people all over the world.

And make his case for what his government is doing right and well.

But will Bennett go further?

Will he make news?

Will he unveil some new initiative that will light up Evangelicals and excite them about returning to Israel despite vaccine requirements?

Will he promise to appoint an ambassador to the Christian world, something I have been advocating for several years?

Might he announce the formation of a Christian Advisory Council, made of prominent and influential Christian leaders who can help him and his inner circle develop long-term strategies to strengthen and deepen relations with Israel?

I hope so, and ALL ISRAEL NEWS will certainly report on the summit.

Still, Bennett’s remarks tonight should merely be a kick-off of a much longer and more carefully thought through game. 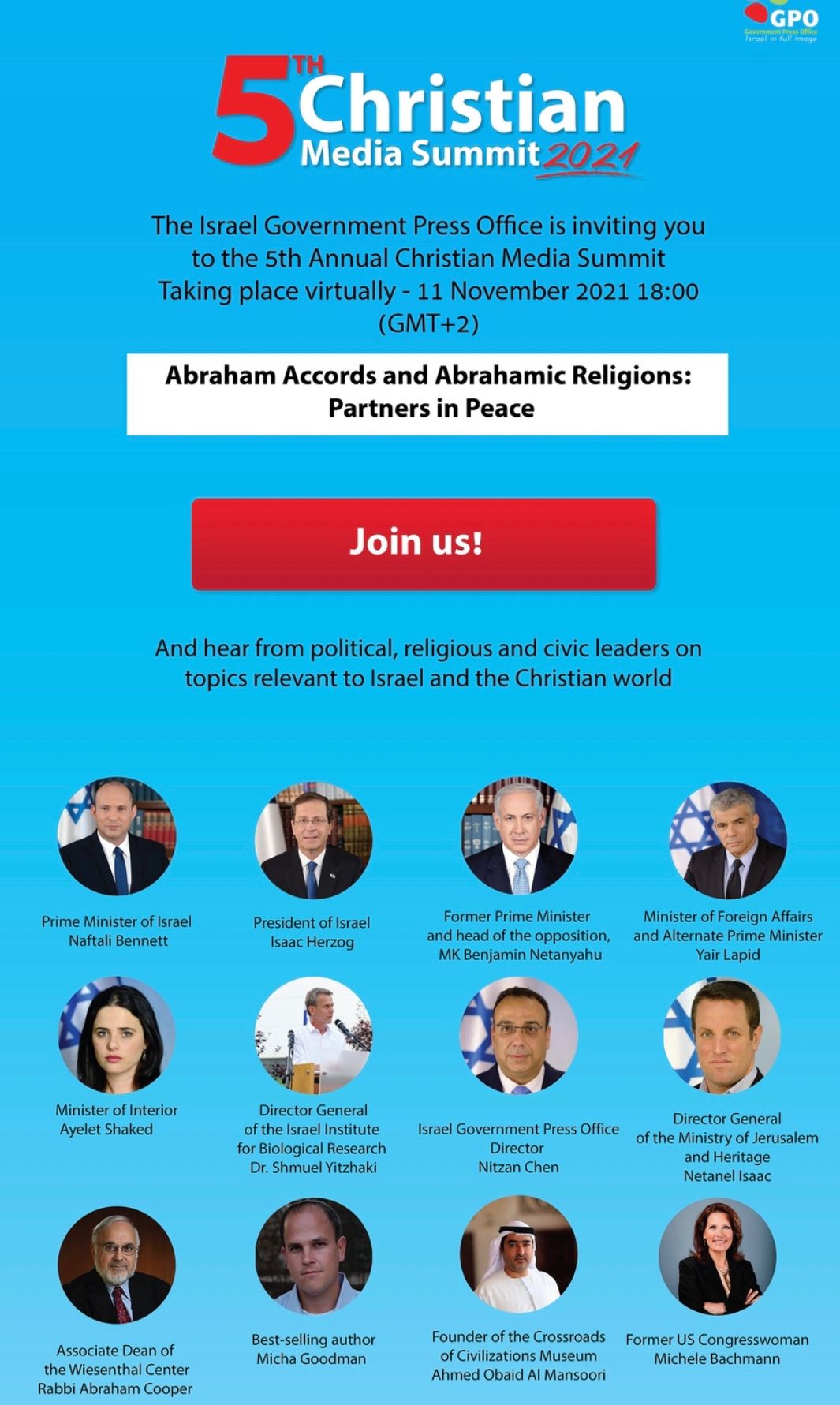 The good news is that other senior Israeli officials will be speaking tonight, as well, and ALL ISRAEL NEWS will be covering their remarks as well.

A number of Christian leaders will be speaking briefly as well.

Nitzan Chen, director of the GPO, said in a statement: “The goal of the summit is to foster better understanding and strengthen the friendship between Christians around the world and the State of Israel. The purpose of this joint gathering is to yield cooperation with the Christian community and strengthen the alliance between Christians and the State of Israel. The government of Israel views the Christian media as a vital and professional channel of information to Christian viewers, readers and internet users across the globe. The summit features an in-depth encounter with Israel's political, civic, cultural and religious leadership.”