United States Sen. Mitch McConnell penned a message to the attendees of the Jerusalem Prayer Breakfast, being held in Jerusalem June 9 – 10.

In his message, he wrote about the longstanding and deepening relationship between the two nations since the establishment of the independent Jewish state in 1948, reminding attendees that the U.S. was “the very first nation to recognize the State of Israel” and that, together, they share “common values like democracy, individual freedom and the pursuit of peace and prosperity in the region and around the world.”

McConnell confirmed the importance of strong, pro-Israel leadership in the U.S., which led to the opening of the U.S. Embassy in Jerusalem, as well as the signing of the historic Abraham Accords normalization agreements between Israel and several Arab nations.

“This has provided a blueprint for reducing tensions and increasing cooperation throughout the region,” McConnell wrote. 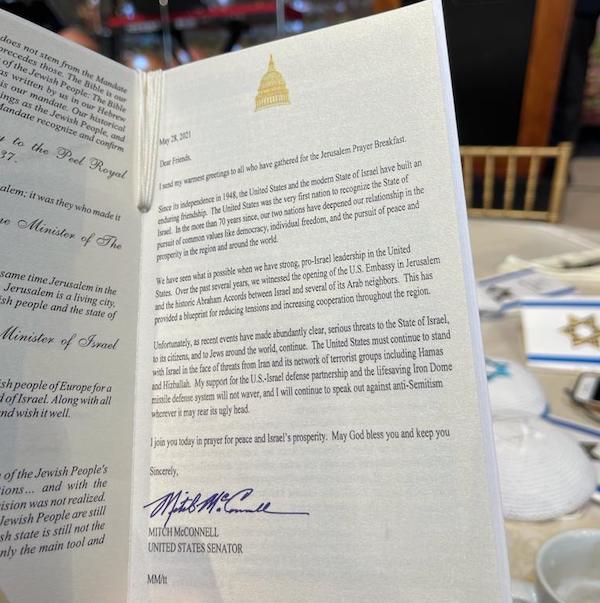 He called for the U.S. to continue to stand with Israel in the face of rising anti-Semitism and “serious threats from Iran and its network of terrorist organizations,” naming Hamas and Hezbollah in particular. McConnell emphasized his ongoing support for the U.S.-Israel defense partnership and Israel’s Iron Dome missile defense system.

He concluded his message of solidarity by writing, “I join you today in prayer for peace and Israel’s prosperity. May God bless you and keep you.”

The Jerusalem Prayer Breakfast (JPB) is a prayer movement that brings together government leaders and influential Christian leaders for a gathering in the nation’s capital to pray for the peace of Jerusalem.