The fact that Israel’s Defense Forces (IDF) is the most moral army in the world is being challenged on the heels of an internal Israeli report that an inadvertent bullet by the IDF may have accidentally caused the death of Palestinian journalist, Shireen Abu Akleh in May 2022 as she stood in the line of fire.

As a result, the Biden administration has recommended that the military review its rules of engagement, specifically as it relates to “live fire.” The Israeli response by IDF commanding officers came swiftly and unapologetically by stating, “In a dangerous situation, a soldier will not stop, open a document and check whether it’s permitted or forbidden to shoot.” This quote by IDF officers was the lead headline in today's Hebrew newspaper, Yedioth Ahronoth.

The Jewish homeland has been fighting for its survival over the course of thousands of years. In the book of Esther 8:11 it is recorded that “The king’s edict granted the Jews in every city the right to assemble and protect themselves; to destroy, kill and annihilate the armed men of any nationality or province who might attack them and their women and children.”

Likewise, in the well-known story of David and Goliath, when the Philistines gathered their troops for battle against Israel, as recorded in 1 Samuel 17, David, the young shepherd boy runs toward the Philistine in a direct attempt to conquer the enemy and strikes him down with one smooth, strategically slung stone. David didn't wait for Goliath to initiate an attack. In other words, David didn't follow the Biden administration's rules of engagement for "live fire". David ran towards Goliath and engaged him and ended the ongoing taunt and threats against the children of Israel.

Not much has changed.  As Israel continues to be taunted and threatened, she will do whatever it takes to remain secure and defend herself against all those who would come against her. It is each country’s obligation to do so, and no one should have the right to impose their standards of what a just war looks like. The U.S. should not do anything to limit or hinder Israel’s ability to defend herself.

Prime Minister Yair Lapid responded to the Biden administration by saying, “No one will dictate our live-fire instructions to us when we are fighting for our lives. I will not let a fighter in the IDF who defended his life under fire from terrorists be prosecuted just so that we will receive applause abroad.”

Reminding everyone that we are “committed to the strictest live-fire regulations in the world,” Lapid emphasized the fact that the IDF “never deliberately shoots at innocent people.” In fact, before any military incursion, Israel is known to warn citizens, by dropping leaflets in territories such as Gaza, before engaging in any military operations.  One such leaflet, written in Arabic, stated, “The IDF is not working against the people of Gaza but against Hamas and the terrorists only.  Stay safe by following our orders.” as reported by Haaretz.

It is these kinds of pre-emptive safeguards which set apart Israel’s army amongst others as doing their utmost to avoid “collateral damage,” while, at the same time, exercising their right to defend their country’s citizens and sovereign territory.

So, for the U.S. to inject itself into Israel’s ability to defend herself, dictating under what circumstances to fire, is inappropriate, hypocritical and certainly unwelcome.  As a party to the Charter of the Organization of American States (OAS), it's interesting to point out that Article 19 states that “No State or group of States has the right to intervene, directly or indirectly, for any reason whatever, in the internal or external affairs of any other State.” This means that is the U.S. is obligating itself to non-involvement.

But when it comes to Israel, the rules of the game don’t often apply as they would towards other nations who might find themselves in similar military circumstances.  Israel, in contrast, often is expected to accept a double standard when facing their own military conflicts. 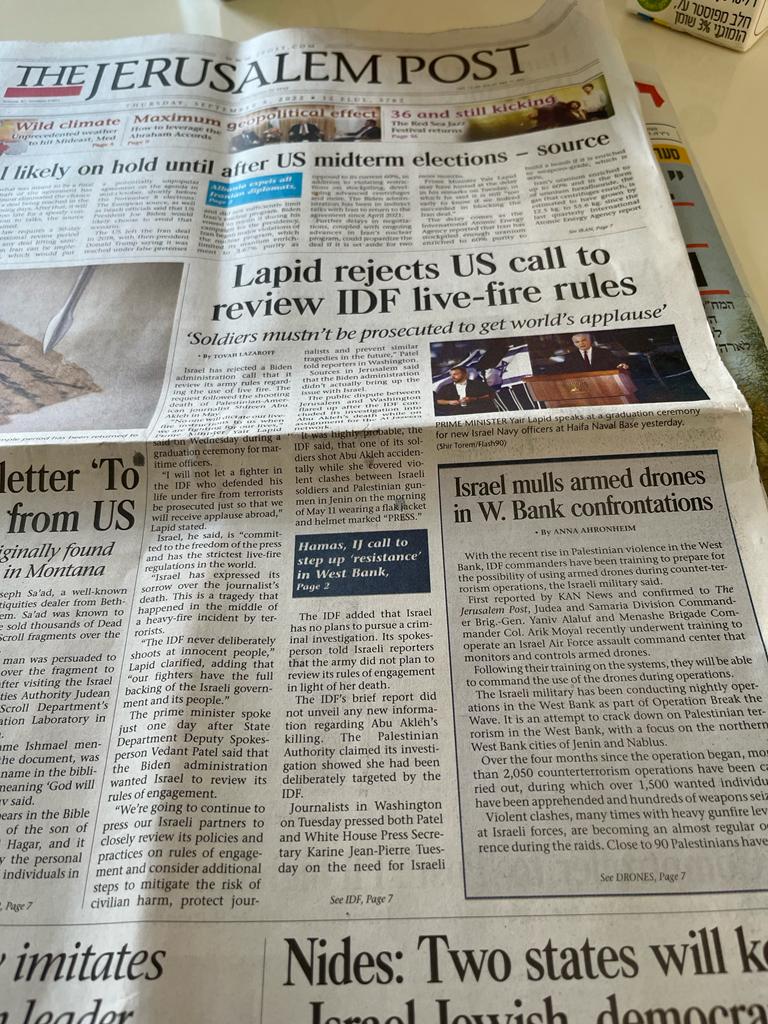