British Prime Minister Boris Johnson made a surprise visit to Kyiv Saturday, where he met with Ukrainian President Volodymyr Zelenskyy and pledged to send 120 armored vehicles and new anti-ship missile systems to Ukraine.

The offer is in addition to a promise $130 million in weapons assistance, including an additional 800 anti-tank missiles, more anti-aircraft weapons, “suicide drones,” helmets, body armor and night-vision goggles for the Ukrainian forces. The British prime minister made that offer after the Russian military bombed the crowded Kramatorsk railway station in eastern Ukraine, killing at least 52 Ukrainian refugees. A missile that was found at the site had the revenge message, “for the children” scribbled on its side.

“Ukraine has defied the odds and pushed back Russian forces from the gates of Kyiv, achieving the greatest feat of arms of the 21st century,” Johnson said after his meeting with the Ukrainian president. “It is because of President Zelenskyy’s resolute leadership and the invincible heroism and courage of the Ukrainian people that Putin’s monstrous aims are being thwarted. I made clear today that the United Kingdom stands unwaveringly with them in this ongoing fight, and we are in it for the long run. We are stepping up our own military and economic support and convening a global alliance to bring this tragedy to an end, and ensure Ukraine survives and thrives as a free and sovereign nation.”

Johnson and Zelenskyy went on a tour of the nearly empty streets of Kyiv during which Johnson spontaneously spoke and shook hands with a Ukrainian man who said he was “so happy” and thanked him for Britain’s contributions. Also during their walk, a Ukrainian woman presented Johnson and Zelenskyy with a gift of two traditional ceramic jugs in the shape of roosters that have come to symbolize Ukrainian resilience. 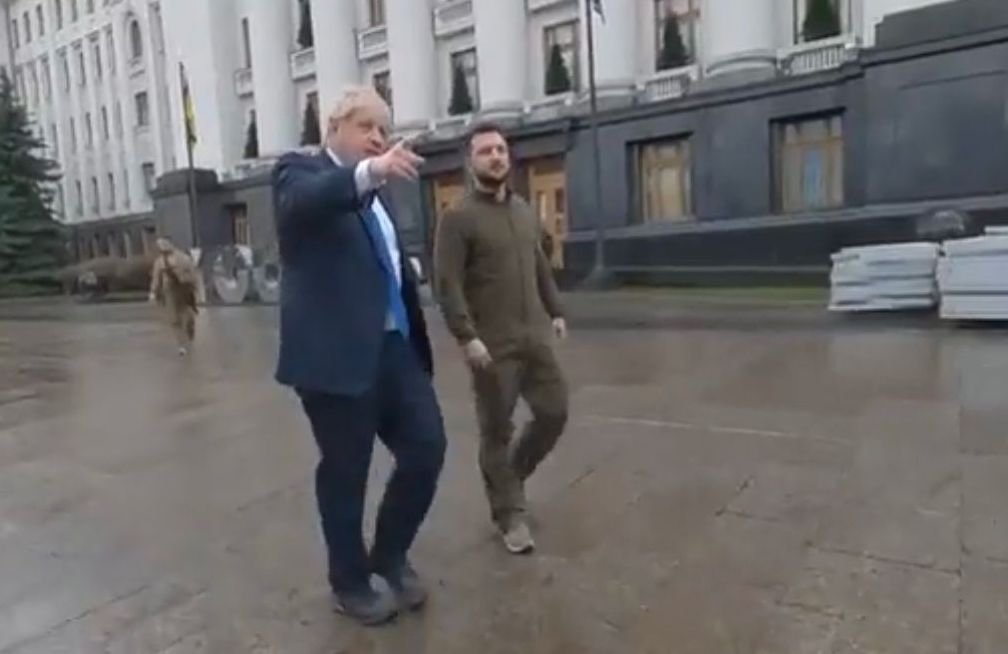 Deputy Head of the Ukrainian President’s Office Andrii Sybiha described the UK as “the leader in the defense support of Ukraine” and Johnson as “the leader of the anti-war coalition. The leader of sanctions on the Russian aggressor.”

The British prime minister was not the only European state leader to pay a visit to the Ukrainian capital this weekend. Austrian chancellor Karl Nehammer also visited Kyiv Saturday, promising more humanitarian aid, including rescue vehicles and fire trucks. He also promised that Austria would ramp up sanctions against Russia even though 80% of Austria’s gas is imported from Russia. 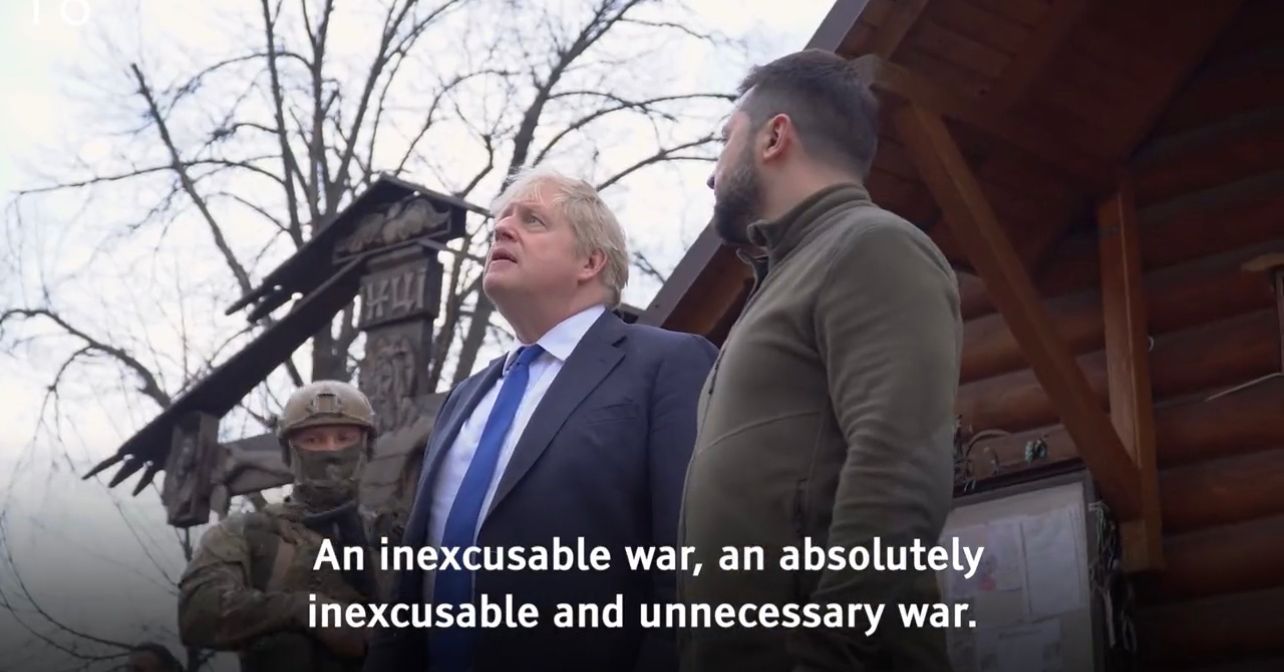 “It is important that, within the framework of our neutrality, we support Ukraine on both a humanitarian and a political level,” Nehammer said in a statement. “What is happening in Ukraine, and in particular in many cities of Ukraine, is a terrible war of aggression against the civilian population.”

European Commission President Ursula von der Leyen and the European Union’s foreign policy chief Josep Borrell also met with Zelenskyy on Friday during a visit that also included a stop in the Kyiv suburb of Bucha, the site of a Russian massacre of possibly hundreds of Ukrainian civilians.

“Here in Bucha we have seen our humanity shattered,” von der Leyen said. “Your fight is our fight. I am here with you in Kyiv today to tell you that Europe is on your side. This is the message, dear Volodymyr, I want to bring to the Ukrainian people today.” The European Union has agreed on a number of sanctions on Russia and frozen Russian assets, in addition to pledging financial support to the tune of 1 billion euros, but continues to buy Russian oil and gas, on which the EU is highly dependent. Since the invasion, according to Josep Borrell, the 27 EU member states have paid Russia the equivalent of around $38 billion in payments for Russian energy supplies.

The Czech, Polish and Slovenian prime ministers were the first European leaders to visit Ukraine after the Russian invasion, when they went to Kyiv on March 15. 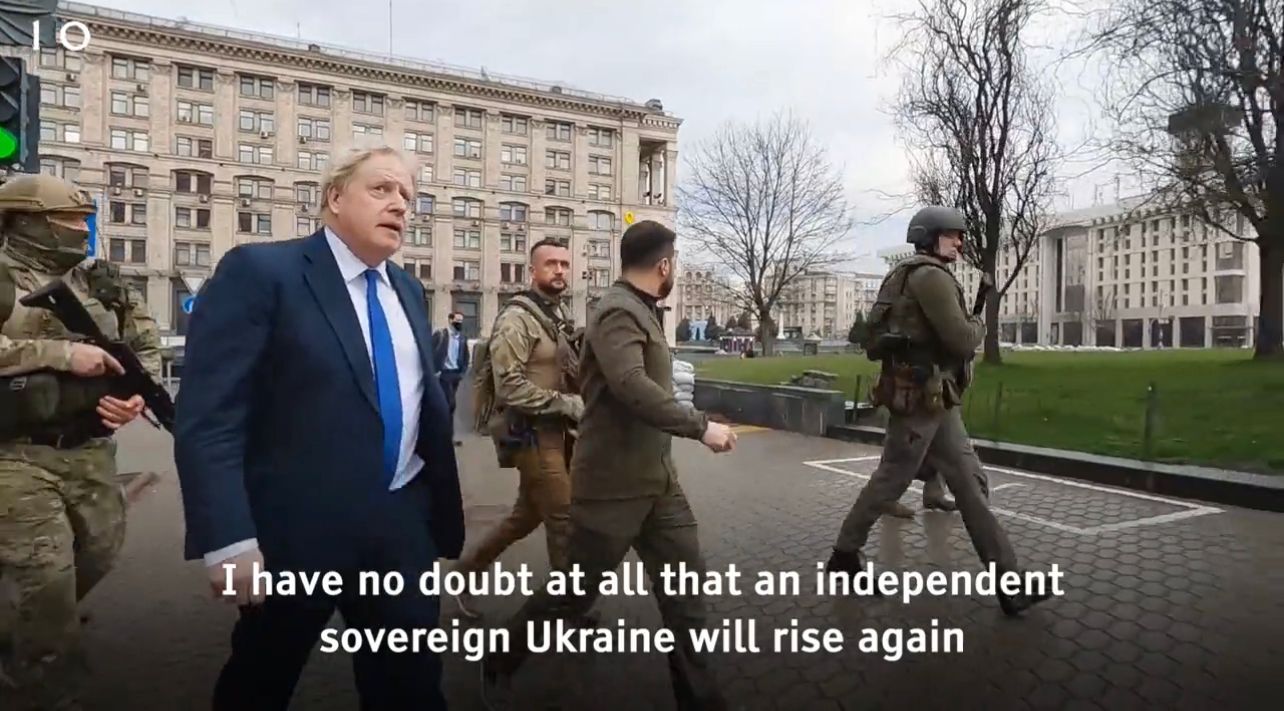