DUBAI – As Middle Eastern leaders adjust to the prospect of a new American president taking office in January, there is a growing sense of concern when it comes to how the White House will deal with the grave and growing threat posed by the Iranian regime.

Publicly and privately, senior officials in Israel, Saudi Arabia, Bahrain and other moderate Arab states are urging President-elect Joe Biden and his team to take great caution when considering whether to reenter the Iran nuclear deal, known by its formal if clunky diplomatic name, the “Joint Comprehensive Plan of Action,” or JCPOA.

The United Arab Emirates is no exception.

In a wide-ranging, one-hour, on-the-record interview in his home on Tuesday, Anwar bin Mohammed Gargash – a cabinet member and the UAE’s minister of state for Foreign Affairs – told me that his government supports a diplomatic resolution to the “serious” conflict with Iran.

But Gargash urged Biden and his team only to accept a “JCPOA-plus-plus” – that is, a far stronger and tougher agreement to stop Iran from being able to build nuclear weapons and also dramatically curtails Tehran’s support for terrorism, its subversion of Arab governments and societies, and its development of offensive rockets and missiles.

The Iranian regime poses a unique threat to the peace, prosperity and stability of the Middle East, Gargash explained, especially as it forms closer strategic ties with Turkey, Qatar and Russia.

While Gargash is very optimistic about the prospect of peace and normalized trade and tourism relations with Israel – and believes other Arab states will join the historic Abraham Accords the UAE signed on Sept. 15 at the White House – Iran and other radical Islamist states and organizations put these positive trends at risk.

That said, Gargash told me the UAE is determined to push back at the radicals, creating a “new model” of Arab governance that is technologically advanced, militarily strong, diplomatically forward-leaning, and shows true respect for the role that Jews and Christians have played in the region historically and can play in Muslim societies in the future.

The fact that the UAE this week became the first Arab state to be approved to buy U.S.-built F-35 stealth fighters – the most advanced fighter jet in the American arsenal – is a sign of the growing trust between the U.S., Israel and the UAE.

In part one of our interview, I reported Gargash’s views on creating this new model of moderation, progress and peace, and how the UAE wants this model to provide an alternative to that of the political Islamists.

In part two, I reported Gargash’s views regarding the dangerous posed by Turkish President Recep Tayyip Erdogan, and that of the emerging Russian-Iranian-Turkish-Qatari axis.

Today, in part three, let me share with you excerpts from my conversation with Gargash related to how the UAE would like the Biden team to deal with Iran, as well as how the UAE views the importance of respecting Christians and Jews in the region.

No issue is of more concern to the UAE leadership right now than how Washington will deal with Iran come January.

As vice president in the Obama administration, Biden was both an architect of and cheerleader for the JCPOA.

President Donald Trump pulled out of the deal in May 2018, calling it “insane” and an “embarrassment” that was poorly negotiated and made Iran more dangerous, not less.

During the 2020 campaign, Biden repeatedly stated that he planned to reenter the JCPOA, if he were elected.

ROSENBERG: Let’s discuss the incoming Biden administration. The Iran nuclear deal is obviously of concern. How is President Biden and his team going to navigate forward? What is the United Arab Emirates’ basic message to the president-elect?

GARGASH: There are several things I would say.

Number one is that, you know, the last thing we want is a confrontation with Iran. Okay?  Because we live in a very close proximity. While we have serious issues with Iran, these issues need to be resolved politically and diplomatically. I don’t want to take the issues with Iran lightly. They are serious issues, I think – that’s the first thing.

The second thing is so we feel that there needs to be a process where Iran is engaged. But we are very much [in favor of] the JCPOA-plus-plus. And the JCPOA-plus-plus means that it has to address Iran’s activity in the region, and it has to address the whole issue of missiles and rockets. I don’t know if you have seen Tom Friedman’s article on this one in the New York Times – it was I think last week. Tom Friedman basically wrote that Biden can’t just go back to the JCPOA. The region has changed and everybody is worried about Iran’s nuclear accuracy and capability and he looks at the ARAMCO attack as a very clear line of Iran’s capability. So, I think these things should be done.

In the fall of 2018, the UAE invited its first-ever delegation of Evangelical Christian leaders for a visit with Crown Prince Mohammed bin Zayed al Nahyan (aka, “MBZ), a delegation I was honored to lead.

In the spring of 2019, the UAE invited the first-ever visit by a Roman Catholic Pope to the Arabian Peninsula, and encouraged Pope Francis to host a nationally-televised mass that attracted more than 150,000 people. 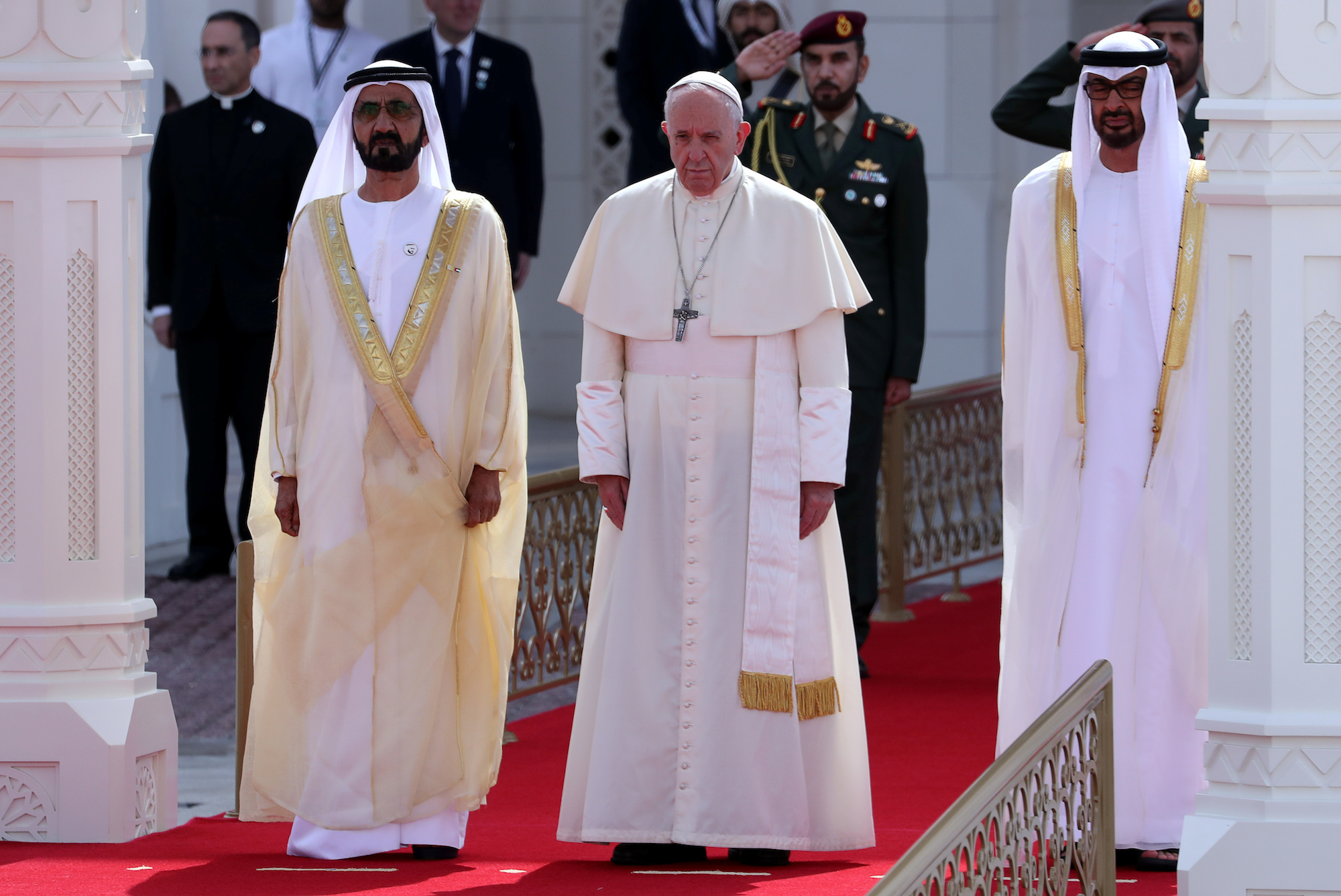 ROSENGERG: When we brought the delegation [in October 2018], we had two hours with Crown Prince Mohammed bin Zayed. We said told him there were three things that he needed to know about Evangelicals when it comes to the issue of peace.

One, our love for Israel and the Jewish people is theological, it’s not political so it can’t be changed. It’s who we are really in our core. 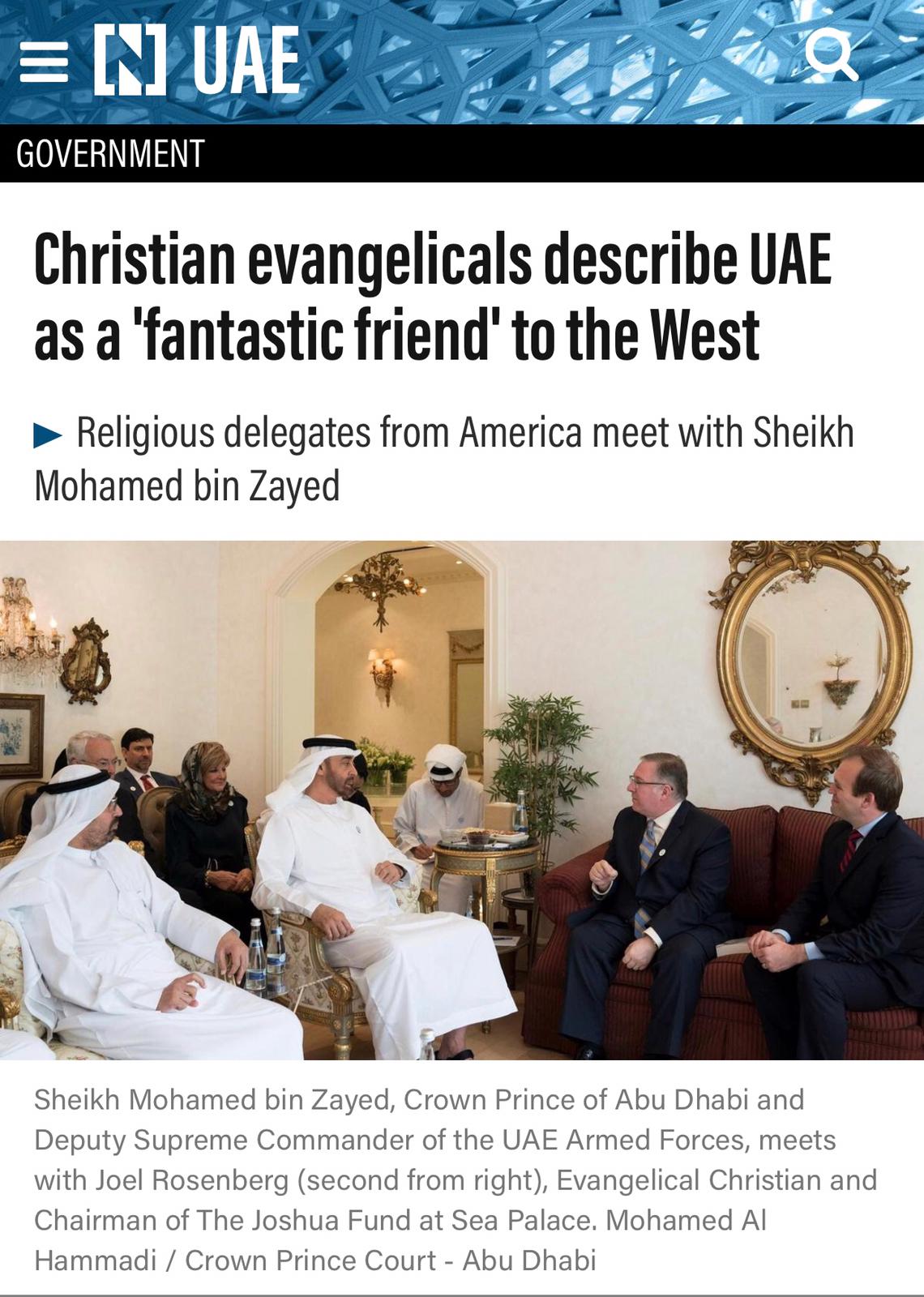 Third, we are supposed to pray for the peace of Jerusalem. That’s what the Bible commands us, and we have been praying every day, but it has been a long time since – almost a quarter of a century – since King Hussein, and President (Anwar) Sadat before him, made peace with Israel. So, we are looking, “Who will be the next Arab leader to make peace with Israel, and will that leader be willing even if the Palestinians are just not ready to make that decision?” And the crown prince leaned forward to our shock, and he said, “Joel, I am ready.” And we ended up having a very interesting conversation – and wow – we didn’t expect it. We just wanted to say what we believed. But it became clear that His Royal Highness was looking for a pathway to make peace with Israel. So, we were not allowed to walk out and tell everybody, because that was off the record at the time. And we kept our word. But it gave a remarkable insight into how he looked at Israel and what he was doing to advance peace and we were very encouraged.

GARGASH: I think for [the crown prince], it is something he believes in. He believes that you have to change the Middle East with hope and with action. And he believes that taboos that people assume are there to stay forever, they should be broken for the good. And you’ve seen that in many of his actions.

ROSENBERG: In part, because the crown prince is signaling that you can be a devout Muslim and have really respectful relationships with people – okay, theologically we disagree, but that doesn’t mean we can’t be friends.

GARGASH: [We] are also saying that while we seek also to build mosques for Muslim communities in Europe and it’s their right to have these places of worship [in Europe], you know you’ve got half a million Filipinos living here [in the UAE]. And for them it is important for them to go to their church. It’s important for them not to feel persecuted because of their religion. And what an historic moment when they all attended mass in Abu Dhabi, for example.

ROSENBERG: When we met with Saudi Crown Prince Mohammed bin Salman [MBS] in Riyadh [in November 2018], we said to him during the conversation, “We just came from the Emirates and there are 700 freely-operating churches there, but none here in the Kingdom. Can we get to a stage where one, two, three and more churches are built here in Saudi Arabia?” And it was a very interesting conversation. He said, basically, “No, not now, because those churches are going to be attacked.” He said the timing was not right, there many more reforms he needed to make first. But he also talked about the hadith [Islamic sacred writings from the time of the Prophet Muhammad that are not recorded in the Qur’an] that says “there cannot be two religions operating on the Arabian Peninsula.” But, of course, there were – and are today – churches operating on the peninsula. So, that hadith it can’t mean there can’t be any churches or respect for Christians, can it? And he said that he has asked top Saudi Muslim scholars, “What exactly did the hadith refer to when it spoke of the Arabian Peninsula – or “Arabian Island”? Did it mean the entire Peninsula? Or just the Hejaz Region [along the Red Sea]? Or just Mecca and Medina? MBS said that there are even ancient ruins of churches here inside the Kingdom, and of course the Prophet married a Christian. So, he said they are looking at the issues, which we took to mean as a “no” for now, but maybe not forever, which was a sign that he was considering it. 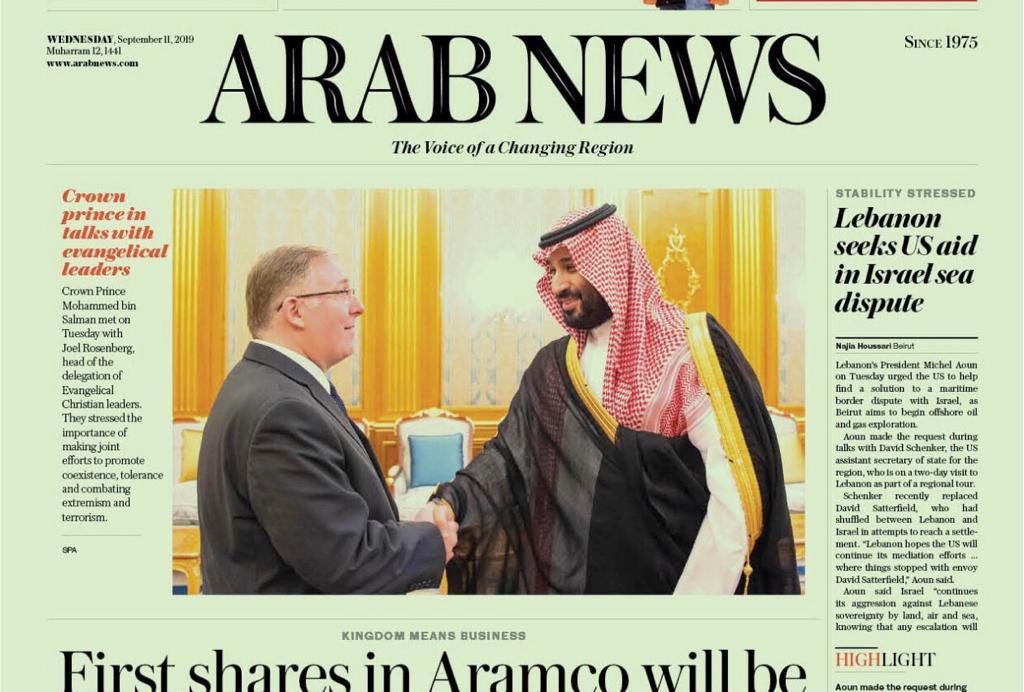 But here [in the UAE], it’s really quite extraordinary. I have been meeting with Christian leaders here and they are very encouraged because they say it’s unlike almost anywhere else in the region except Egypt where there are 15-16 million Christians.

GARGASH: Of course. I think, again, you ought to also see that countries that have had so much civil strife and violence [because of radical Islamism] have lost a lot of their Christian population. And they have actually lost a lot of the talent and a lot of the vitality of their own communities. I mean, Iraq is a clear case in point here. Syria is another case in point, because of the civil war of course you know. And, again, today in Lebanon for example, many of the Christians also are wondering whether they have a future in that country.

And this is my argument. My argument is that political Islamists such as the Muslim Brotherhood and other activist groups that have put their imprint on the region since the late 70s have very little [positive] to show for it. They have actually been responsible for very conflictual state of affairs. They have been responsible for an increase in violence and wherever also they try to rule in government such as in Sudan or Afghanistan they have very little to show.

And I think the region is – for the first time in 40 years – is basically saying that, “No, maybe we have to think differently.” And I think here we have to separate very clearly between Islam as a religion, one that we subscribe to and about the political Islamist interpretation of that religion.