Former U.S. President Donald J. Trump held a conference call Thursday with Evangelical, Jewish and Catholic leaders to launch a new project he is calling the “National Faith Initiative,” including the establishment of a “National Faith Advisory Board.”

A source close to Trump told ALL ISRAEL NEWS that 25,000 faith leaders joined the call, which lasted about 30 minutes.

The project – and the response – is certain to boost speculation Trump may run for president again in 2024.

While the call was not open to reporters, sources say pastors opened and closed the call with prayer for the nation. 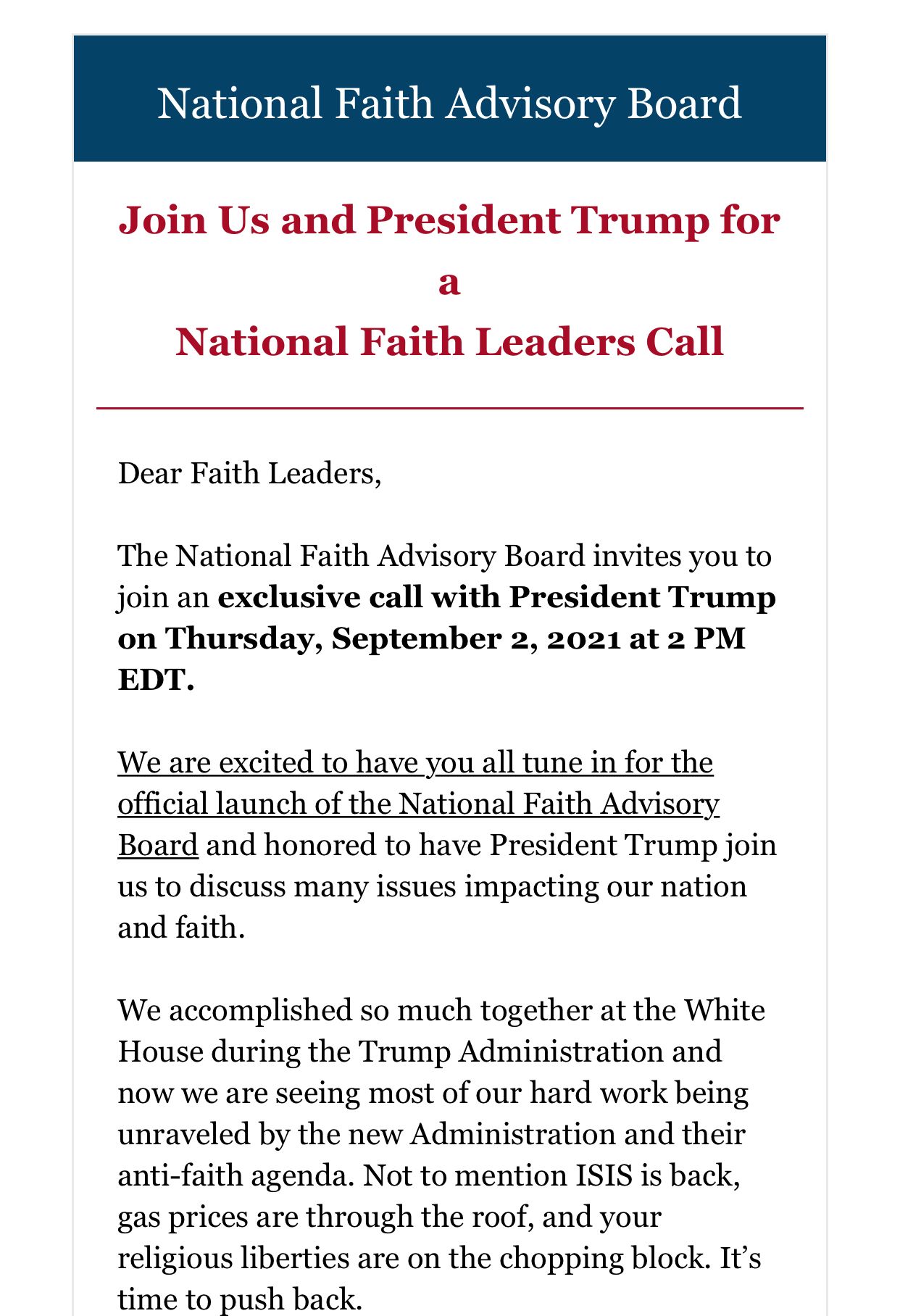 Trump thanked the leaders for their prayers and took their questions.

In addition to contrasting his record with that of President Joe Biden on issues ranging from abortion to judges to religious freedom and the economy, Trump discussed several Middle East issues.

He pointedly criticized Biden for the way he has handled Afghanistan, calling it “the most embarrassing moment in the history of our country.”

One source said Trump argued that Iran has become “emboldened” due to the weakness shown by the Biden administration.

And he focused a good deal on Israel.

The “National Faith Initiative” was first reported by Jacob Kornbluh of The Forward.

“We did a lot for Israel – we had a very powerful relationship with Israel,” Trump said, citing several of his pro-Israel accomplishments, according to The Forward.

The call was also mentioned by the Jewish Insider.

The host of the call was Paula White-Cain, who helped organize Christian leaders to support and advise Trump both as a candidate in 2016 and in the White House.

Here is a copy of an email she recently sent out to religious leaders across the U.S.:

We accomplished so much together at the White House during the Trump Administration. We are seeing all our hard work being unraveled by the new Administration and their anti-faith agenda.

You were part of history. We need to reclaim the faith community’s voice – your voice!

It was a great honor to serve President Trump and work alongside each of you as we fought for people of faith every day at the White House. With your help we built a unique coalition of faith leaders – some who had been very involved but many who became involved for the first time. Through tens of thousands of you, we reached millions of people of faith.

Now, I'm excited to ask for your prayers and involvement as we begin a new initiative.

Our team who served in the White House and amplified your voices and advocated for the issues we hold dear, is launching the National Faith Advisory Board.

Through the National Faith Advisory Board, we will continue our mission to work with you as a team to advocate for the most important issues to all of us with ONE strong voice. We will protect our religious freedoms here and abroad, in order to worship and live according to our faith. We will provide you with regular policy updates, advocate for critical policy issues, host regular conference calls and events with prominent leaders, and continue to grow this vital coalition.

Included in this effort are friends you will all be very familiar with - Jenny Korn, former

Deputy Assistant to the President and Amanda Robbins Vargo, former Associate Director for Faith Engagement at the White House, and many trusted faith leaders. Our country is at a critical crossroads and we need your help to continue our efforts.

In the coming days, we will send out an exclusive invitation for our official launch that I know you won't want to miss! Please click the button below to update your information and join.

We look forward to hearing from you and working together to impact our country.