Supermodel Bella Hadid, a known pro-Palestinian and anti-Israel activist, was chosen as a brand ambassador for the Austrian diamond brand Swarovski – however, her image will not appear in the brand’s stores in Israel.

The Crystalino group, which imports and owns Swarovski stores in Israel, issued a statement distancing itself from the choice of a new presenter. In it, the group made clear it “unequivocally rejects Bella Hadid's choice of brand presenter.”

“The company will not allow Bella Hadid to take part in advertising the brand in Israel and we are working hard to replace it,” said the statement.

Hadid and her sister, Gigi Hadid – also a supermodel – are daughters of Palestinian real estate developer Mohamed Hadid, all of whom have made anti-Israel statements on social media particularly during escalations between the Israeli military and Gaza terror groups. They recently blasted Israeli police for operations against Muslim rioters on the Temple Mount.

Bella Hadid has participated in pro-Palestinian marches in the United States in the past and live-streamed the events to her followers.

She announced her new contract with the crystal company on Instagram on Friday, saying she is “extremely honored and excited to be the new face of the iconic Swarovski.”

On Friday, supermodel Bar Refaeli – who is Israeli – posted a story on Instagram in memory of the three Israelis murdered in Thursday night’s terrorist attack in Elad. Refaeli made sure to tag Bella Hadid, asking “Are you going to repost?”

Refaeli was joined by Arab Israeli activist Yosef Haddad who also noted Hadid’s hypocrisy in her posts – one of which was removed after a review by Instagram because it falsely stated that Israel was planning to wipe out “an entire Palestinian community.” 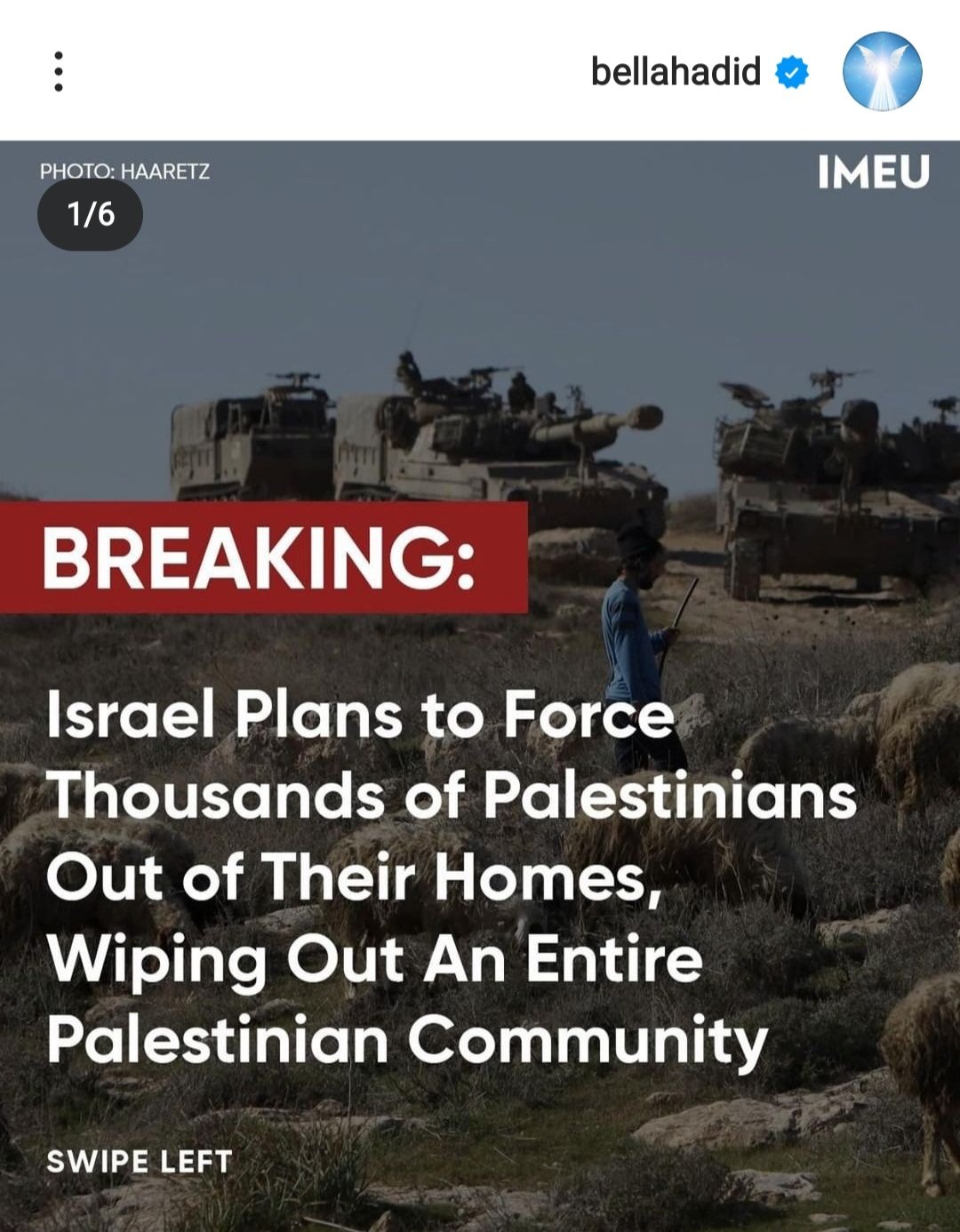 Instagram story by Bella Hadid which was removed by the social media platform (Photo: Screenshot posted on Twitter by Yosef Haddad)

“Bella Hadid continues to incite millions of her followers against Israel and distort reality ... and at the same time she ignores the brutal terrorist attack of Palestinian terrorists yesterday in Elad,” Haddad wrote. “We must act against her in the networks with all our might, from reports against her through comments in posts and flood her page with a reflection of the truth that the damage she is doing to Israel is significant.”

Gigi Hadid also drew sharp criticism from Israelis recently after she expressed support for Ukraine in an online post that compared Russia’s actions to Israel.

“I am pledging to donate my earnings from the Fall 2022 shows to aid those suffering from the war in Ukraine, as well as continuing to support those experiencing the same in Palestine,” she wrote. “Our eyes and hearts must be open to all human injustice. May we all see each other as brothers and sisters, beyond politics, beyond race, beyond religion. At the [sic] end of the day, innocent lives pay for war – not leaders. HANDS OFF UKRAINE. HANDS OFF PALESTINE. PEACE. PEACE. PEACE."