JERUSALEM—Significant in both its location and number, a concert of 144 harpists took place on the Southern Steps of the Temple Mount in the shadow of al-Aqsa Mosque last week.

The event was part of the two-week long All Nations Convocation Jerusalem & Watchmen’s Tour of Israel, an annual conference which was back in person in Israel this year after being shut down due to the pandemic since 2019.

“We are very pleased that the gates, more and more, are beginning to open for the people to return to Jerusalem, to return to the mountain of the Lord,” Kate Hess, director of The King’s Harp Program, told ALL ISRAEL NEWS. 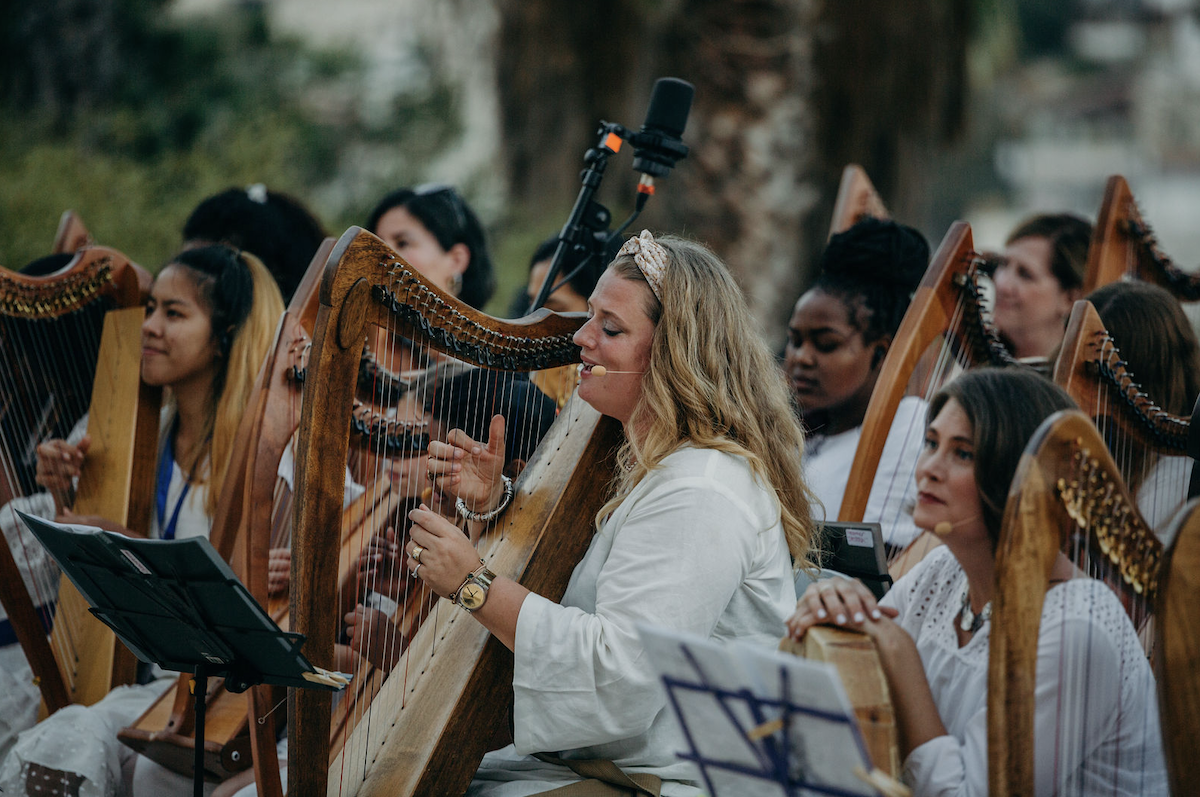 More than 1,000 Christians from 140 nations attended the conference, hosted by the Jerusalem House of Prayer for All Nations which was founded by Tom Hess in 1987 and has operated 24/7 prayer on the Mount of Olives ever since.

The convocation, which began on the Feast of Trumpets until the eve of Sukkot, also featured the harp concert on the Southern Steps of the Temple Mount, the location where Peter is believed to have preached on Pentecost.

The harpists, from 30 nations, led worship in multiple languages while facing the Temple Mount, as the crowd overlooked southern Jerusalem – flanked by the Old City to the west and the Mount of Olives to the east.

Kate Hess, who also runs JHOPFAN with her husband Tom, said that the number of harpists was based on Revelation 14 which talks about the 144,000 who will be singing and playing harps on Mount Zion.

“When I looked, and there before me was the Lamb, standing on Mount Zion, and with him 144,000 who had his name and his Father’s name written on their foreheads. And I heard a sound from heaven like the roar of rushing waters and like a loud peal of thunder. The sound I heard was like that of harpists playing their harps. And they sang a new song before the throne and before the four living creatures and the elders. No one could learn the song except the 144,000 who had been redeemed from the earth.” Revelation 14:1-3

“It has symbolic and prophetic significance, and as scriptures say again and again that it’s the place of David’s throne and the place of God’s name forever,” Hess said of Mount Zion. “The location is very significant because it is where the Tabernacle of David and the temple was.”

Israeli musician Joshua Aaron led a rendition of “The Blessing” – a song based on the Aaronic blessing in Numbers 6:24-26 – in Hebrew, English and Arabic. 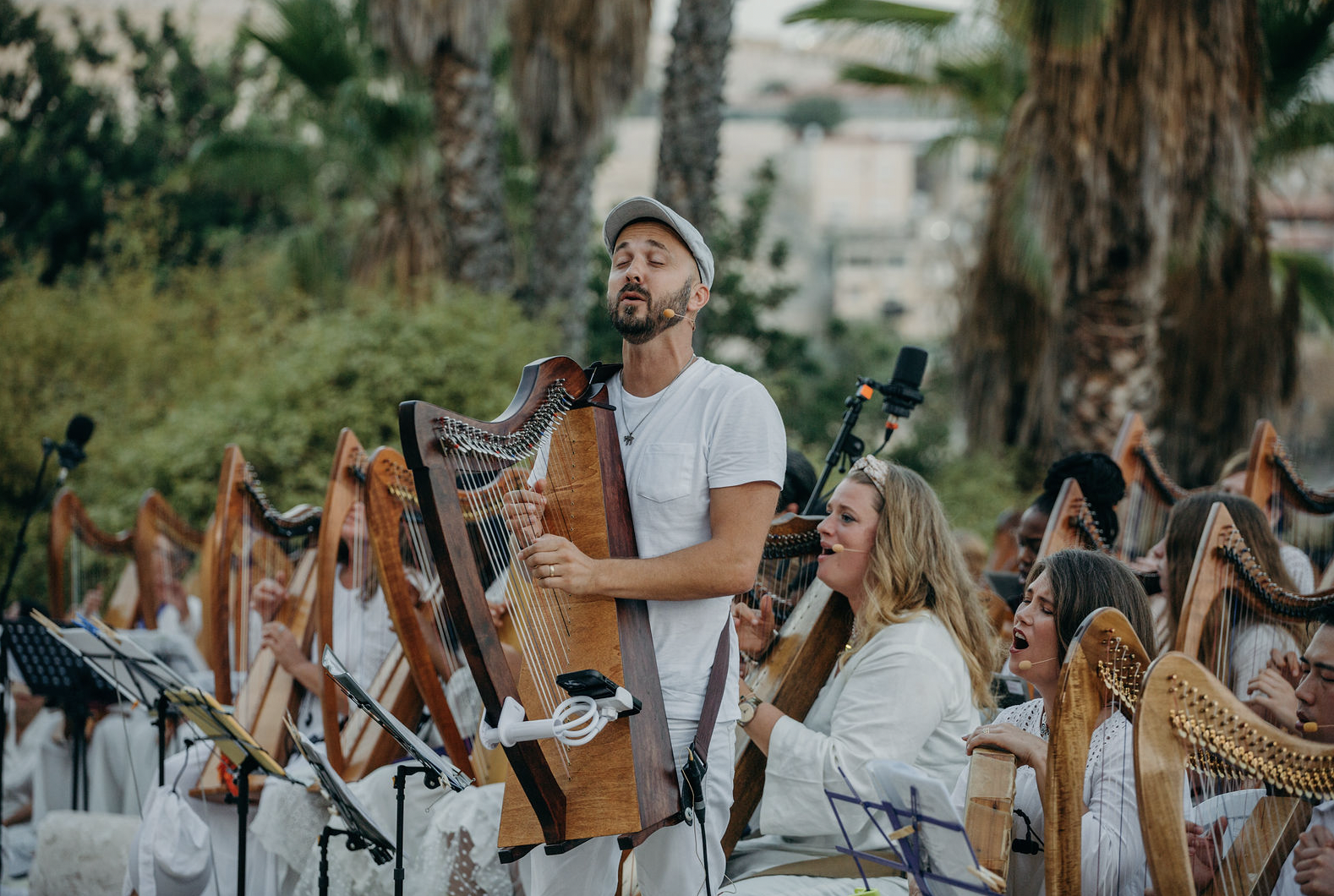 For 12 years, Hess and her team have been training musicians locally and, more recently, online to lead worship using a harp – King David’s primary instrument and the ancient and modern instrument of Israel. Katharine Van Der Beek and Leat Sabbah were conductors at the concert.

This year’s convocation also offered a special program for young adults called “Mighty Men and Women of David.” Their tour focused on “a clarion call and rallying of the next generation” to stand with Israel, Hess said.

The group visited Yad Vashem – the World Holocaust Remembrance Center – and learned about and repented for the Holocaust, anti-Semitism and anti-Israeli sentiment.

The convocation ended last week as the next fall holiday – the Feast of Tabernacles – began on Sunday. Hess said participants were grateful that were able to return to Jerusalem, something they took for granted in the past. 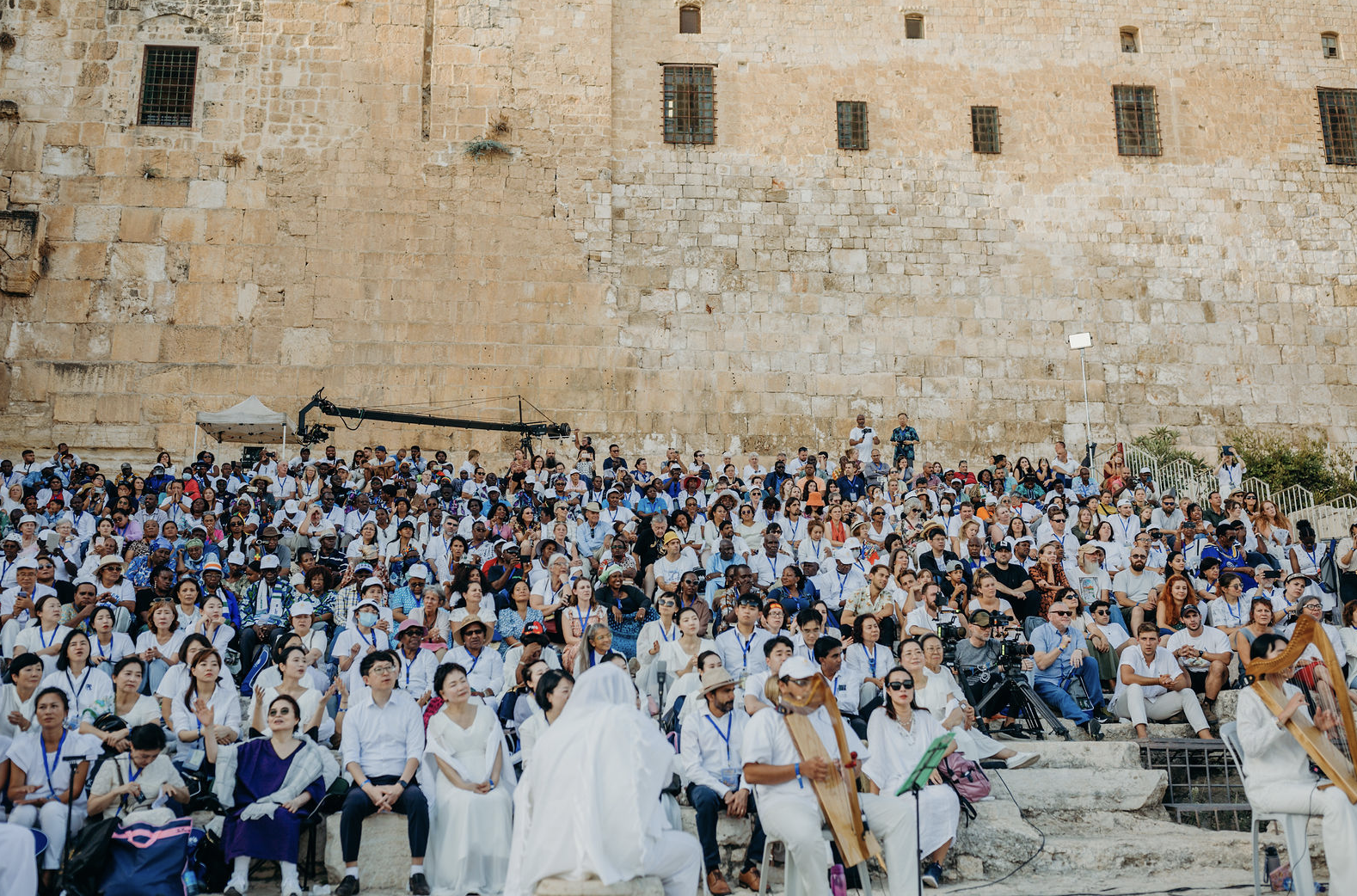 The audience watching the harp concert on the Southern Steps of the Temple Mount in Jerusalem (Photo: Laura Siegel)

“It’s very powerful to see all of this happen, that we are really living out modern-day prophecy,” Hess said. “After three years we were able to gather in person again in Jerusalem and see the fulfillment of the prophecies of all nations coming up and seeking the God of David in His city.”