JERUSALEM—When he ran for president for the first time in 2018, Jair Bolsonaro sparked outrage across the left-wing movement in Brazil.

His enemies, including many in the media, viciously denounced him as a far right-wing extremist.

They hated his Judeo-Christian values and his conservative policies.

They especially hated that Bolsonaro was:

Some left-wingers didn’t just hate Bolsonaro – they wanted to eliminate him as a threat to everything they held dear.

And then one tried to assassinate him.

On Sept. 7, 2018, while Bolsonaro was out campaigning, an assailant lunged at him from a crowd and plunged a huge knife into his belly.

Bolsonaro was rushed to the hospital and though he lost a great deal of blood, he narrowly survived.

What’s more, he ended up stunning every politician, pollster and pundit in the country by winning the presidency. 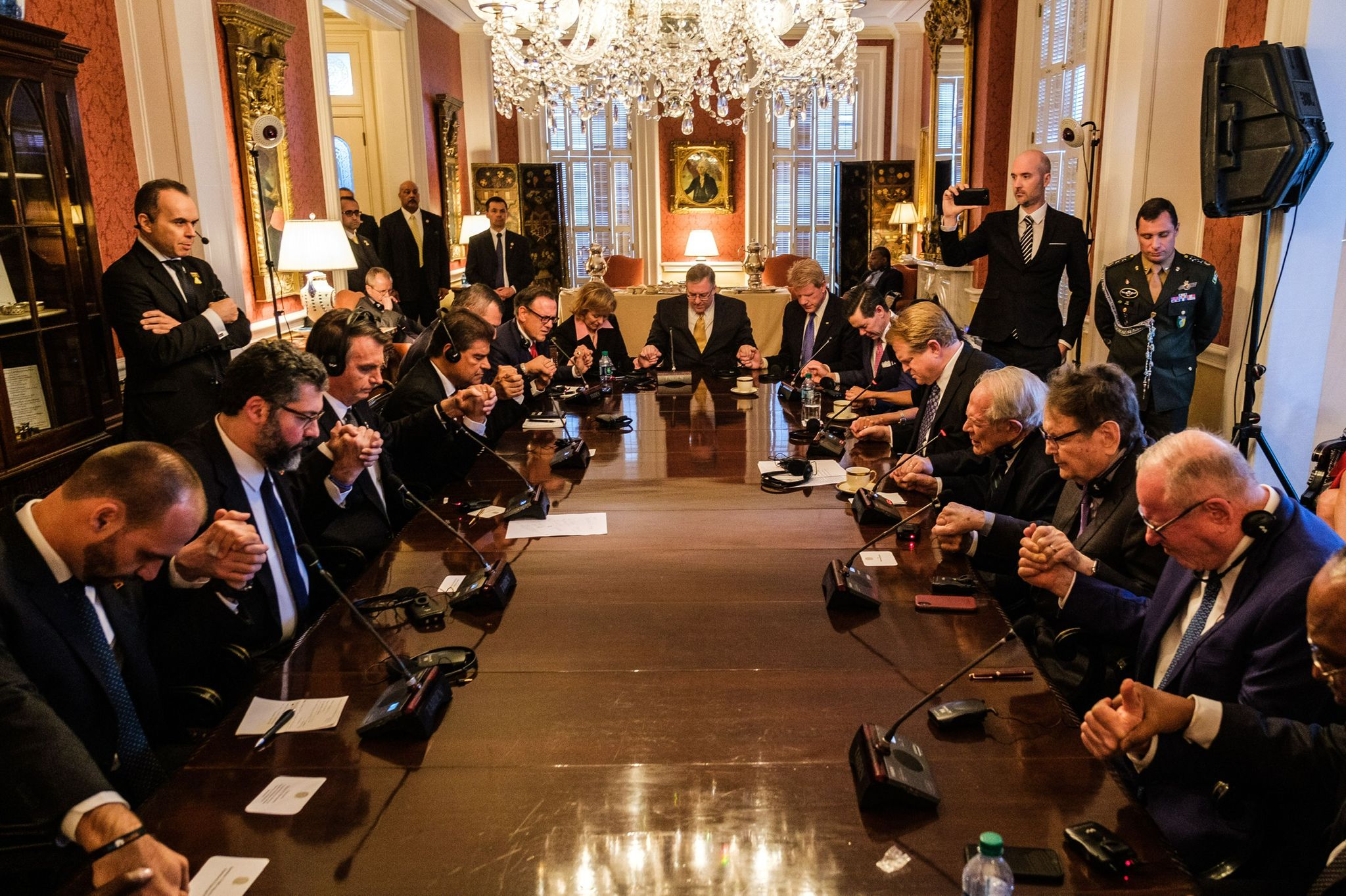 WILL BOLSONARO BE OUSTED BY A LEFT-WING RADICAL?

For months, every poll has shown the incumbent poised to get wiped out on Election Day.

According to much of the Brazilian media, the country has turned on the president.

Bolsonaro has been consistently 10 to 15 points behind his challenger.

A 76-year-old left-wing radical who was encouraged to enter politics by Fidel Castro and founded Brazil’s first socialist political party, da Silva served as Brazil’s president from 2003 to 2011 but was later convicted on charges of corruption and money laundering.

Released by the Supreme Court while he appeal those charges, da Silva has been determined to mount an historic political comeback and stop the rightward direction of Bolsonaro.

But the polls showing da Silva with a commanding lead were, apparently, dead wrong.

With more than 114 million Brazilians voting on Sunday, Bolsonaro did vastly better than expected.

“Mr. da Silva received 48.4 percent of the votes, and Mr. Bolsonaro 43.23 percent, with 99.87 percent of the ballots counted, according to Brazil’s elections agency,” reported The New York Times.

“Mr. da Silva needed to exceed 50 percent to be elected president in the first round,” the Times noted.

He didn’t get there.

Thus, the two men – polar opposites of each other – “will face off on October 30 in what is widely regarded as the most important vote in decades for Latin America’s largest nation,” noted the Times.

WHY SHOULD THIS ELECTION MATTER TO THOSE WHO LOVE ISRAEL?

Bolsonaro has not been a perfect president and he has made his share of mistakes.

He certainly has his share of critics, even among those who basically agreed with the conservative direction he has wanted to take Brazil.

But Bolsonaro and his allies argue that da Silva would take Brazil in a very dangerous direction – towards socialism, anti-Christian social values, and more violence and lawlessness (already epidemic in Brazil).

What’s more, they argue that da Silva is a supporter of the Iranian regime and would turn Brazil away from its current pro-Israel policies into a country hostile towards the Jewish state.

Earlier this year, da Silva said that if he is elected president again he will support the creation of a Palestinian state, despite the corruption in Ramallah and the fact that Gaza is controlled by a terrorist group.

Israel supporters worry that if da Silva wins the runoff and returns to the presidency, he will turn Brazilian policy towards Iran and the Palestinians and against Israel. 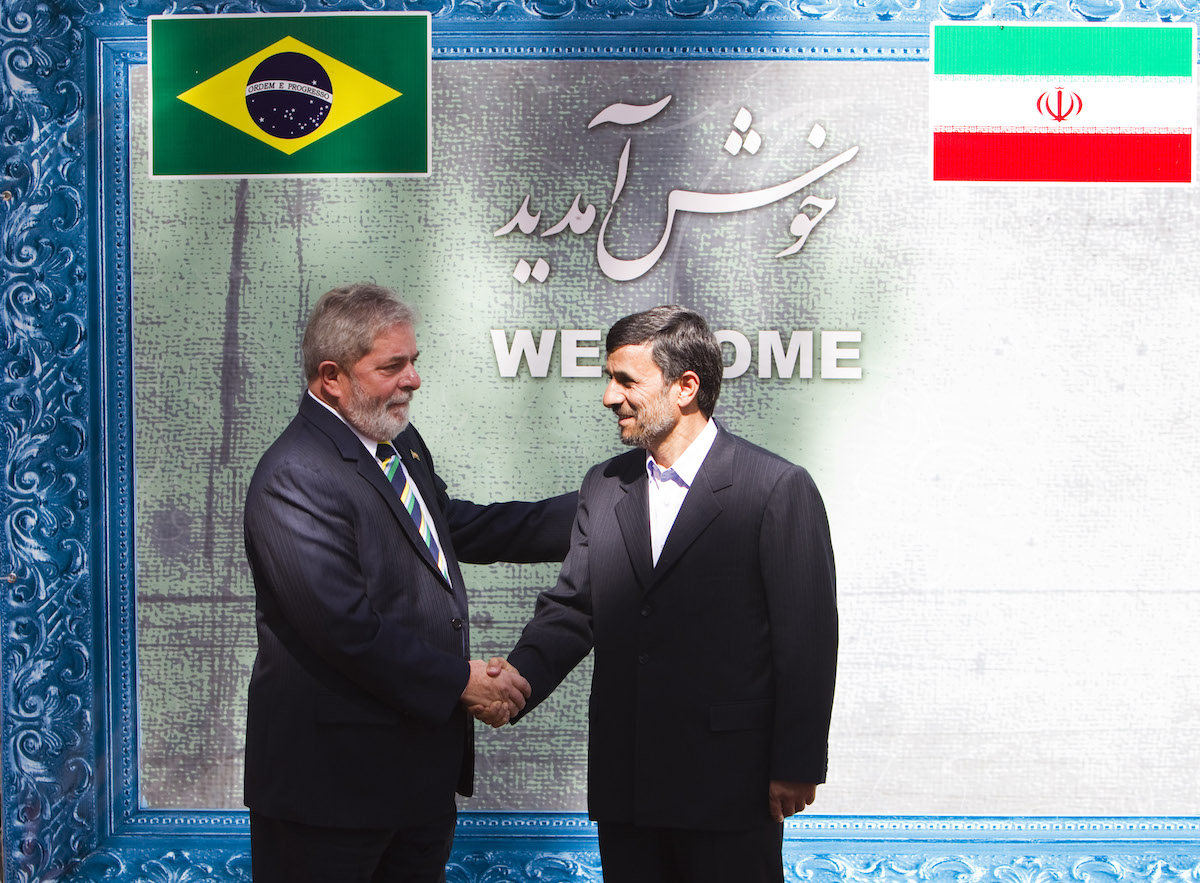 WHO IS JAIR BOLSONARO?

ALL ISRAEL NEWS is non-profit and thus non-political.

We don’t endorse candidates, or call on our readers to vote against them.

We do help our readers understand who they are and what they believe.

That’s why I’m writing about this race.

Former Israeli Prime Minister Benjamin Netanyahu has no hesitation about making endorsements, however.

And not surprisingly, Netanyahu endorsed Bolsonaro for re-election.

After all, the two men forged very close ties while Netanyahu was premier. 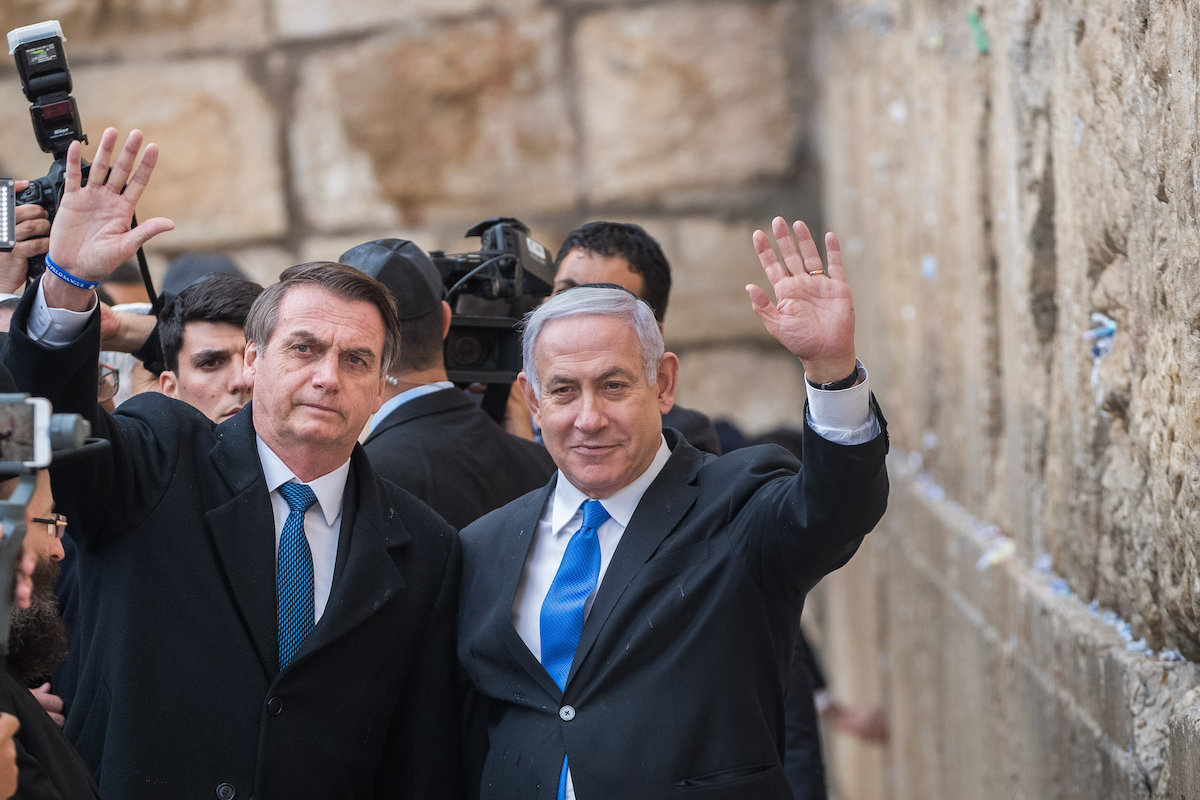 "Thank you, President Bolsonaro, for your leadership and for strengthening the relationship between the Brazilian people and the people of Israel,” Netanyahu said. “Under your leadership, the ties between our two countries have never been stronger, and they have only grown stronger in recent months. You have visited Israel twice, and I have visited once, and we have seen the bonds of friendship and sympathy between our citizens. I wish you all the best, and I thank you again for your wonderful friendship.”

In 2019, I met Bolsonaro on his first state visit to Washington, D.C., to meet with then-President Donald J. Trump.

Bolsonaro had invited a group of American Evangelical leaders to meet with him at Blair House, the official U.S. government guest house for foreign dignitaries, located across the street from the White House.

A group of about fifteen of us met with the Brazilian leader and his son and senior advisors.

Bolsonaro shared candidly with us how he believed that God had saved his life and put him into office. 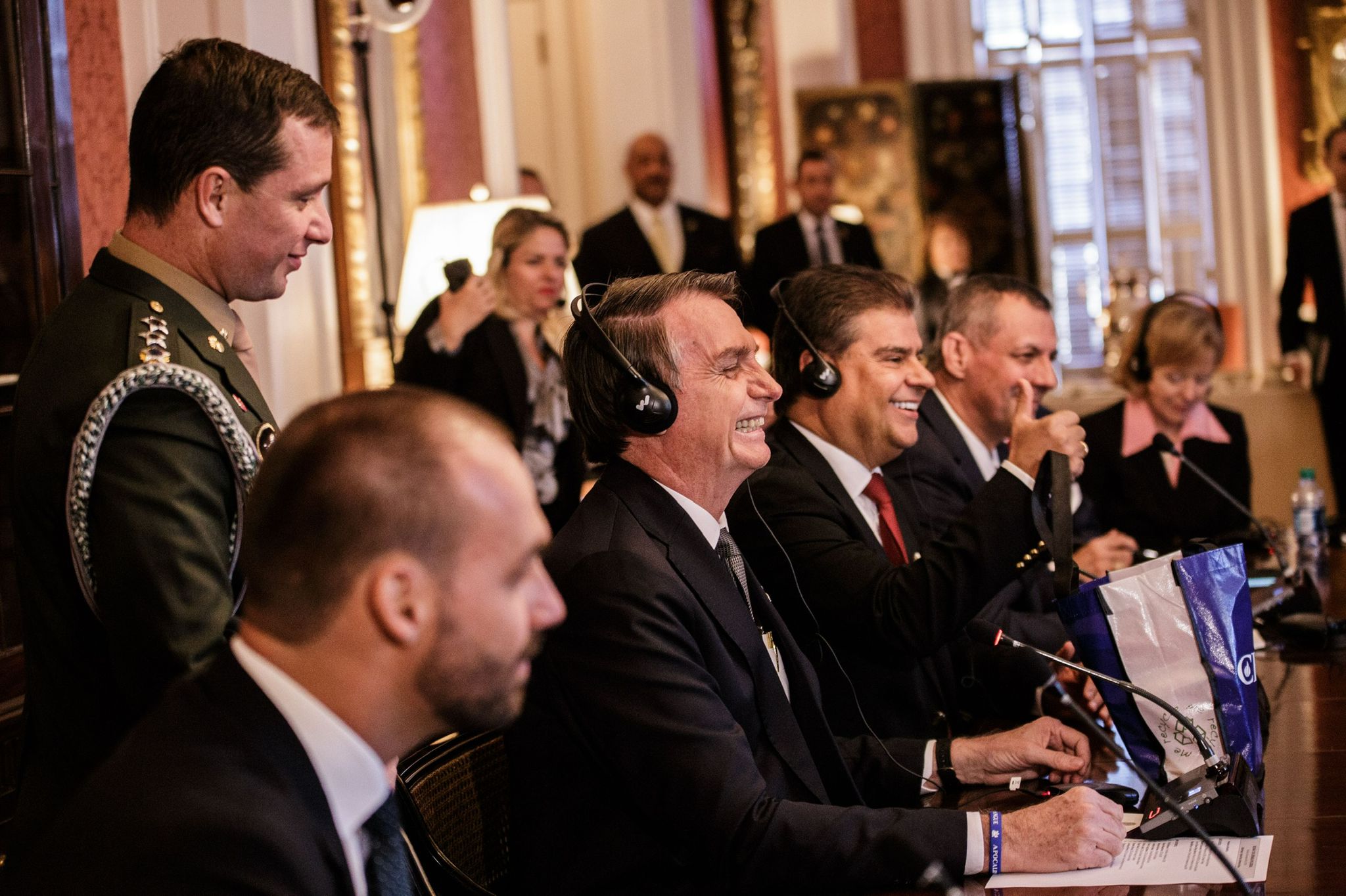 Now, he said, he wanted to use every moment to improve the lives of the Brazilian people, and advance the Judeo-Christian values that he had been raised with.

Bolsonaro described himself as Catholic Christian, and his wife as an Evangelical.

He spent a good deal of time sharing with us how much he loves Israel and wants to move the Brazilian Embassy to Jerusalem.

He asked for our prayers, saying his political opponents were out to destroy him and the spiritual warfare against him and his family was off-the-charts.

Bolsonaro’s rise to power in 2018 has much to do with the Evangelical awakening underway in Brazil.

Once a staunch left-wing Catholic country, tens of millions of Brazilians have in recent decades become “born again” Evangelical Christians, according to the teachings of Jesus in John chapter 3 of the New Testament.

As these Evangelicals have studied the Bible for themselves, they have been become more committed to the Judeo-Christian principles and values found in the Old and New Testament.

And they have sought to have their voice and values represented in Brazil’s government.

“In recent years, as crisis has consumed Brazil, there has been a notable shift in political, social, and religious attitudes,” noted The Atlantic magazine in January 2018. “According to a 2016 survey, 54 percent of the Brazilian population held a high number of traditionally-conservative opinions, up from 49 percent in 2010. The shift is particularly evident on matters of law and order: Today, more Brazilians are in favor of legalizing capital punishment, lowering the age at which juveniles can be tried as adults, and life without parole for individuals who commit heinous crimes. Observers have ascribed this phenomenon to Brazilians’ increasing fear of violence over the last few years. This rightward shift has been accompanied by a massive growth in the country’s Evangelical Protestant and Pentecostal churches, which constitute the greater part of Brazilian Protestantism. The percentage of those who identified as evangelicals in Brazil has grown from 6.6 percent in 1980, to 22.2 percent in 2010.”

“Perhaps the clearest articulation of this shift has been the rise of…military officer-turned-congressman Jair Messias Bolsonaro,” The Atlantic noted at the time. “In a time when corruption has tarnished Brazil’s political class, his blunt charisma, zeal for law and order, and rapport with Brazil’s evangelicals, have turned what would ordinarily be glaring weaknesses into strengths.”

So, who will win this epic showdown for the leadership of Brazil – da Silva or Bolsonaro?

And ALL ISRAEL NEWS will be watching events there closely.