JERUSALEM—I am by no means convinced that U.S. President Joe Biden has given up on his insane nuclear deal with Iran.

While I’m praying that Biden withdraws his proposal, or that leaders in Tehran reject it, I’m still worried that they are all just keeping quiet until after the American mid-term elections are over on Nov. 8 and then will move later this year to seal this terrible and dangerous agreement.

So, this week on “The Rosenberg Report” – my new, weekly, prime time show on the TBN Christian TV network – I explain what I call, “Tehran’s Doomsday Theology.”

Why is it dangerous?

Why don’t Biden and most other Western leaders understand it and factor it into their approach towards the Iranian regime?

And why is former Israeli Prime Minister Benjamin Netanyahu one of the few world leaders who very much understands it?

To watch the full episode of “The Rosenberg Report” this week on TBN’s video-on-demand system, please click here.

To sign up for a free email update on www.RosenbergReport.com so you’ll never miss an episode (and can watch it on your phone or home computer), please click here.

WHAT EXACTLY DID BIDEN SAY ABOUT IRAN’S APOCALYPTIC ESCHATOLOGY WHEN HE WAS RUNNING FOR PRESIDENT?

Our story begins on a cold winter’s day in the Midwest – not the Mideast.

The venue: a public library in Iowa.

Biden was running for president and wanted to give a major foreign policy address.

It wasn’t a good speech.

Biden dropped out of the race exactly one month later. 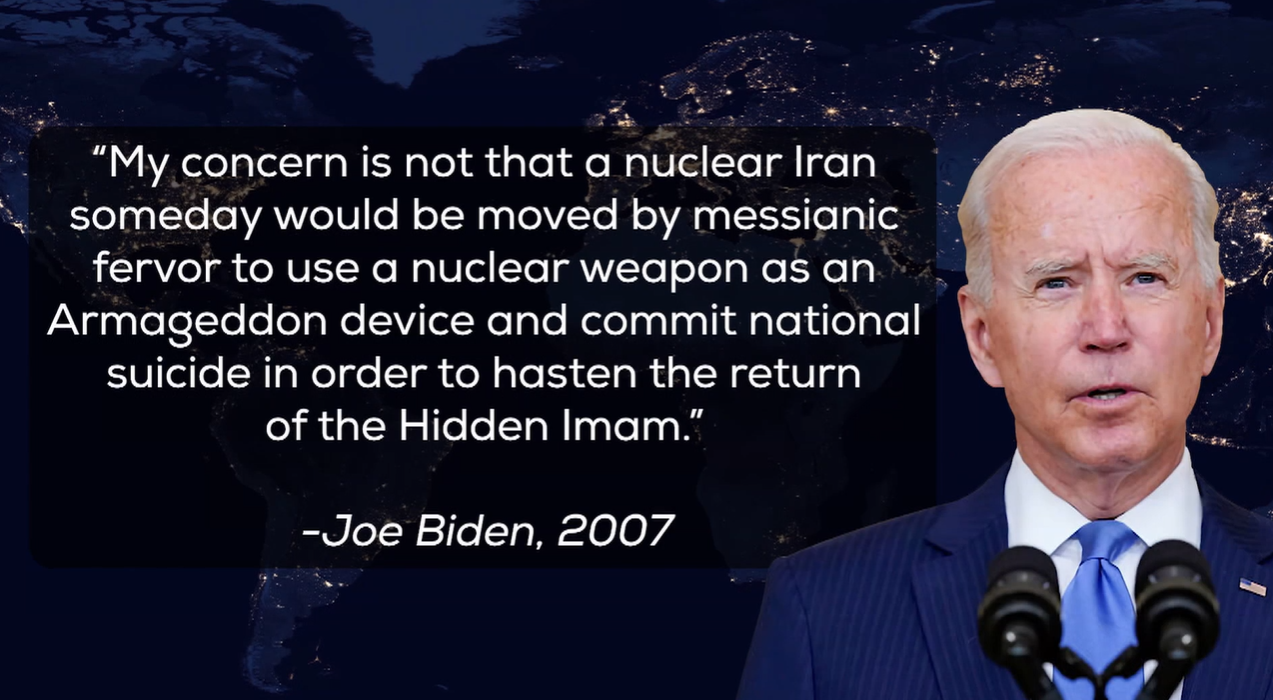 Still, one line is worth recalling.

“My concern,” he said, “is not that a nuclear Iran someday would be moved by messianic fervor to use a nuclear weapon as an Armageddon device and commit national suicide in order to hasten the return of the Hidden Imam.”

As a candidate, Biden was dead wrong to dismiss the End Times theology driving Iranian leaders, such as Supreme Leader Ali Khamenei.

As commander-in-chief, Biden still doesn’t get the Iranian regime.

Thus, putting us all in danger.

IRANIAN LEADERS HAVE BEEN CRYSTAL CLEAR ABOUT THEIR INTENTIONS TOWARDS THE U.S. AND ISRAEL

In January 2001, Khamenei made his intentions crystal clear.

“It is the mission of the Islamic Republic of Iran to erase Israel from the map of the region.”

One month earlier, then-Iranian President Akbar Hashemi Rafsanjani, declared: “If one day, a very important day, of course, the Islamic World will also be equipped with the weapons available to Israel now, the imperialist strategy will reach an impasse, because the employment of even one atomic bomb inside Israel will wipe it off the face of the earth.”

Still, to Iranian leaders, Israel is merely the “Little Satan.”

The United States is the “Great Satan.”

That’s why in 2005, Iranian President Mahmoud Ahmadinejad praised Khamenei for saying Israel “must be wiped off the map,” adding, “this was a very wise statement.”

Then Ahmadinejad castigated those who say “it is not possible to have a world without the United States and Zionism,” declaring, “But you know that this is a possible goal and slogan.”

Annihilating both Israel and the U.S. is a core Iranian doctrine.

In July 2015, just days after agreeing to the nuclear deal with Obama and Biden, Khamenei admitted his goals hadn’t changed.

“The slogans of the Iranian nation on Al-Qods Day show what its position is,” he said. “The slogans ‘Death to Israel’ and ‘Death to America’ have resounded throughout the country and are not limited to Tehran and the other large cities. The entire country is under the umbrella of this great movement.”

This is not mere rhetoric.

Khamenei and his closest allies hold to an eschatology teaching Muslims to “hasten” the coming of the Islamic “savior” – known as the Hidden Imam, Twelfth Imam, or Imam al-Mahdi – by obliterating Israel, the epicenter of Judaism, and Christianity, the perceived epicenter of Christianity.

Tehran’s Doomsday Theology came to light when Ahmadinejad began talking constantly about the Mahdi, insisting his arrival was “imminent.”

“O God, hasten the arrival of Imam al-Mahdi – and grant him good health and victory – and make us his followers and all those who attest to his rightfulness.”

In 2012, Ahmadinejad added more detail about the Mahdi, including this memorable line.

“He will come with Jesus Christ to lead the freedom and justice lovers, to eradicate tyranny….”

Did you catch that?

The Mahdi will not remain hidden – he will come soon, with Jesus as his deputy, to “eradicate” the “tyranny” imposed by Israel and the United States.

At a conference in 2019, a prominent Iranian theologian was explicit.

In his book, Al-Imam al-Mahdi, The Just Leader of Humanity, an Iranian theology professor argued that before the Mahdi can return, Muslims must launch a global war to kill or subjugate Jews, Christians, and other “infidels.”

On Oct. 22, 2002, Khamenei declared, “The first lesson we can learn from believing in the reappearance of Imam Mahdi is that eliminating oppression from the world is not only possible, but it is definite….We should prepare ourselves to serve as the soldiers of Imam Mahdi.” 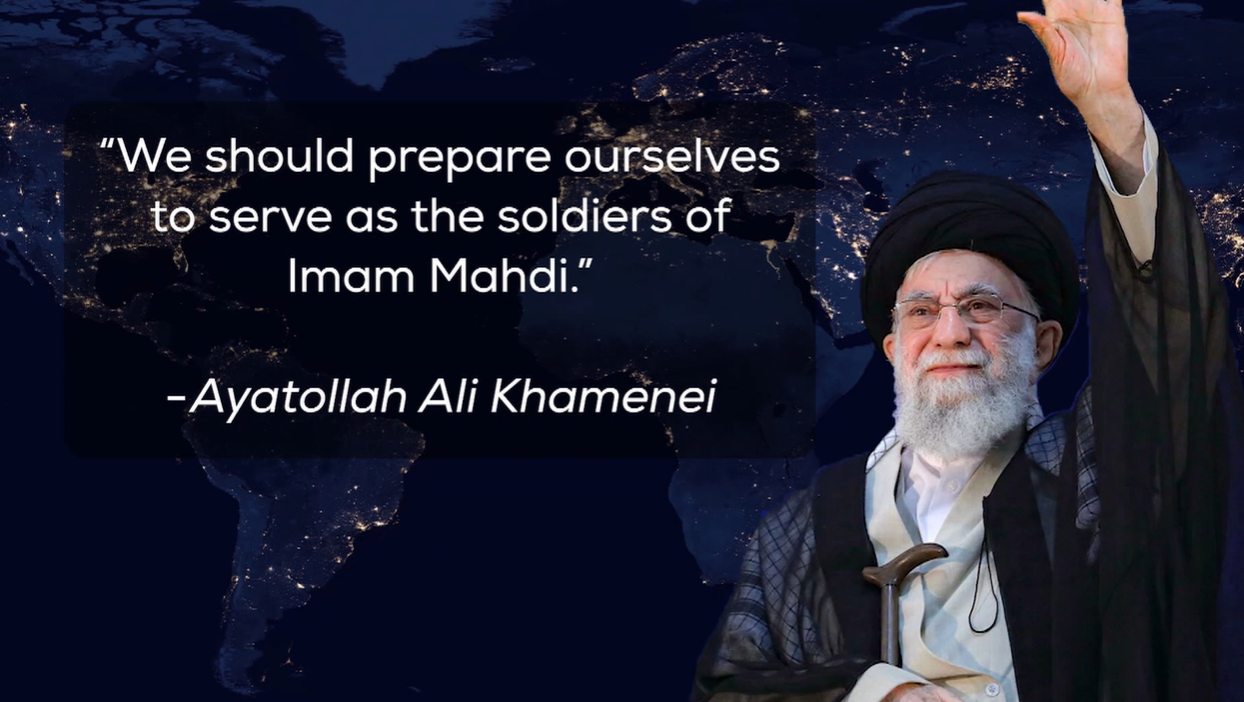 In 2010, Khamenei claimed to be the personal representative of the Mahdi on earth and issued a fatwa that all Muslims must “obey him.”

In 2020, Khamenei told Iranians, “Awaiting does not mean sitting idly….It means preparing and being active.”

As recently as March, Khamenei published new statements on his website urging Iranians to prepare for the coming of the Twelfth Imam.

For Iran’s Supreme Leader, the clock is counting down to the End of Days.

EXCLUSIVE INTERVIEW: WHAT NETANYAHU TOLD ME ABOUT IRANIAN ESCHATOLOGY

I know because we discussed it for a documentary I produced in 2007. 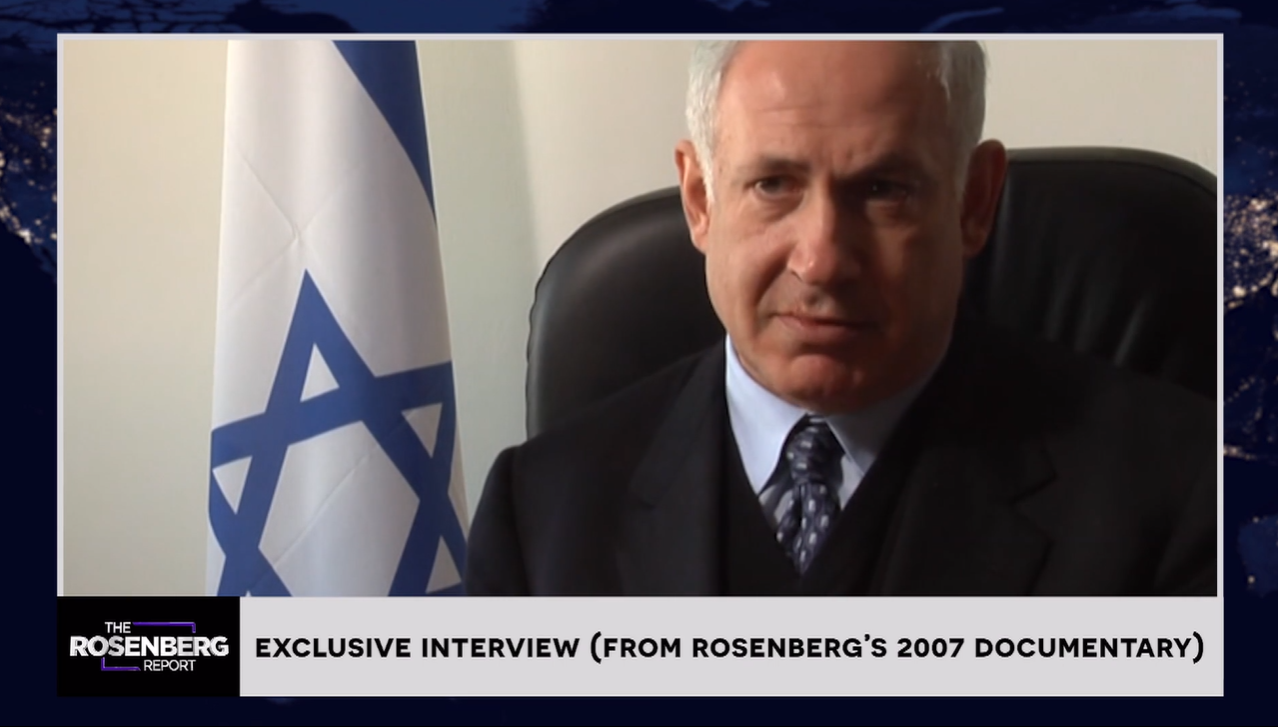 “I think the West fundamentally misunderstood, and still misunderstands, the threat of Radical Islam,” he told me. “It is a fanatic, messianic ideology that seeks to have an apocalyptic battle for world supremacy with the West. It seeks to correct what it sees its disciples see as an accident of history where the West has risen, and Islam had declined. And the correction is supposed to be done by the resurrection of an Islamic empire and the acquisition of nuclear weapons and the use of nuclear weapons, if necessary, to obliterate Islam's enemies and to subjugate the rest. This is a pathological ideology, much like Nazism was, and it poses a threat, in my judgment, in many ways bigger than Nazism. Because Hitler embarked on a world conflict and then sought to achieve nuclear weapons, whereas the leading radical Islamic regime, Iran, is seeking to first acquire nuclear weapons and then embark on a world conflict. And that is what is not yet understood in the West. And certainly if it's understood, it's not acted upon.”

“You've already seen what the Sunni stream does, which is to smash into buildings in Manhattan with collective suicide, to smash into the Pentagon with collective suicide,” Netanyahu added. “And there's no reason to believe that the militant Shiites, once they have atomic weapons, will not be suicidal. They say openly that they intend to remove Israel. Their first position – we're the Little Satan. But remember that their goal is to get the United States, the Big Satan. We're just a station, one station, on the way to world conquest. And to have such a regime that believes in an apocalyptic Armageddon with the West in which millions will die on both sides – but the Muslim millions go to a Muslim heaven with all the trappings – to have that crazy ideology in charge of a country that is developing atomic weapons is unbelievably dangerous and it should stop. Everything else is secondary to this.”

“Of course, they threatened to create a Second Holocaust in Israel and proceed on their idea of a global empire producing 25 atomic bombs a year, 250 bombs in a decade, with missiles that they're already working on,” Netanyahu continued. “They want to develop to reach the eastern seaboard of the United States. This is something that just everything else pales in comparison to this development. This has to be stopped, for the sake of the world, not only for the sake of Israel.” 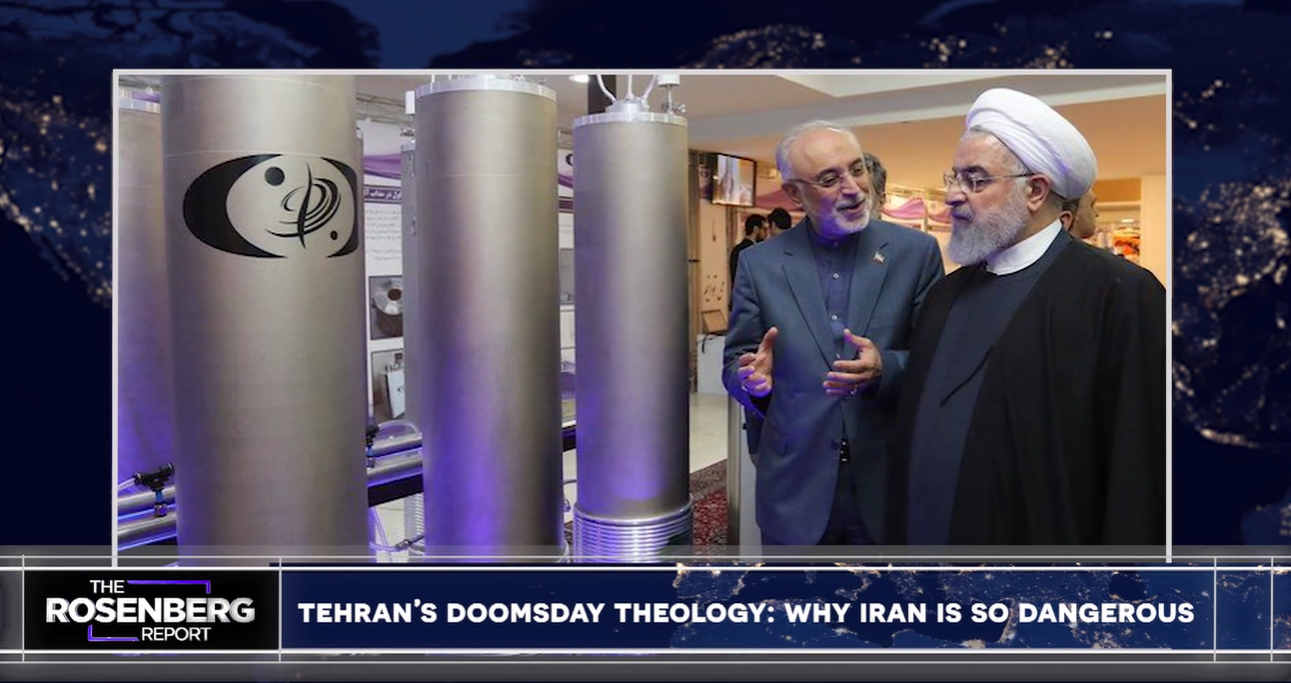 WHY IS IT IMPORTANT TO EDUCATE CHRISTIANS ABOUT TEHRAN’S DOOMSDAY THEOLOGY?

To be clear, my goal here is education, not politics.

I’m not endorsing Netanyahu or any other candidate or party in Israel’s elections next week.

This is a non-profit and thus a non-partisan news and analysis service.

For the past month, here on ALL ISRAEL NEWS and on “The Rosenberg Report,” I’ve been sharing with readers and viewers what I know about each of the major candidates for prime minister, their strengths and their weakness.

It’s important for you to know the good, the bad, and the ugly about all of them so that you are well informed.

And so you can pray for these leaders more effectively.

Between 2010 and 2013, I wrote three novels – The Twelfth Imam, The Tehran Initiative, and Damascus Countdown – imagining what could happen if American leaders ignore this threat and Israel is left to deal with it alone.

I wish I could tell you leaders in Washington and elsewhere get it.

Biden definitely does not get it.

That’s why we cannot stop praying for the peace of Jerusalem.

Yes, we’re seeing one Arab nation after another make peace with Israel.

But simultaneously, evil is rising.

Too many leaders are blind.

We need God to open their eyes.

But our hope cannot be in men.

It has to be in the God of the Bible.

I’m not trying to discourage you.

I want you to inform you – and inspire you to engage in this spiritual battle.

“First of all, then, I urge that entreaties and prayers, petitions and thanksgivings, be made on behalf of all men, for kings and all who are in authority, so that we may lead a tranquil and quiet life in all godliness and dignity. This is good and acceptable in the sight of God our Savior, who desires all men to be saved and to come to the knowledge of the truth.”

Pray for your leaders – even if you didn’t vote for them.

Pray for the enemies’ leaders – that God would save them, or remove them.

And pray without ceasing.

I’ve read the end of the story.

I’ve studied the Bible from Genesis through Revelation.

I can assure you that Ali Khamenei is not actually the “Supreme Leader” of the world, or Iran.

The Bible clearly states that Jesus Christ is the “King of kings and the Lord of lords,” and that He is coming back, but not as the deputy to the Mahdi.

Our Risen God is coming back to Jerusalem to establish His kingdom and reign forever.

He’s not calling us to annihilate anyone.

He’s calling us to preach the Gospel and make disciples of all nations.

“This Gospel of the Kingdom shall be preached in the whole world, as a testimony to all nations, and then the end shall come.”