By an overwhelming vote – 87 to 27 – Isaac "Bougie" Herzog won the support of more than two thirds of Knesset members voting for Israel's next president.

Herzog will succeed President Reuven Rivlin who finishes his seven-year term in July. Herzog, 60, will become the nation's 11th president when he takes office.

The current chairman of the Jewish Agency for Israel beat out the only other remaining candidate, Miriam Peretz, the conservative, Zionist candidate of Sephardic descent.

Though the president's role is largely ceremonial, the position has become especially relevant in recent years. The president decides who gets the mandate to form a government – something Rivlin has had to do five times during his seven-year term. The president can also pardon and grant clemency – which could be a factor depending on the outcome of Prime Minister Benjamin Netanyahu's corruption trial.

Herzog descends from a prominent Zionist family whose late father Chaim Herzog was a retired IDF general and served as Israel’s sixth president from 1983 until 1993. His paternal grandfather Rabbi Yitzhak HaLevi Herzog was the first chief rabbi of Ireland and later served as the Ashkenazi chief rabbi in Israel.

Politically experienced and well-connected, Herzog has held several ministerial roles including minister of Tourism, Housing and Construction, Diaspora and minister of Welfare and Social Services. He served as head of Israel’s Labor party and then as chair of the short-lived Zionist Union alliance between 2013 and 2017. 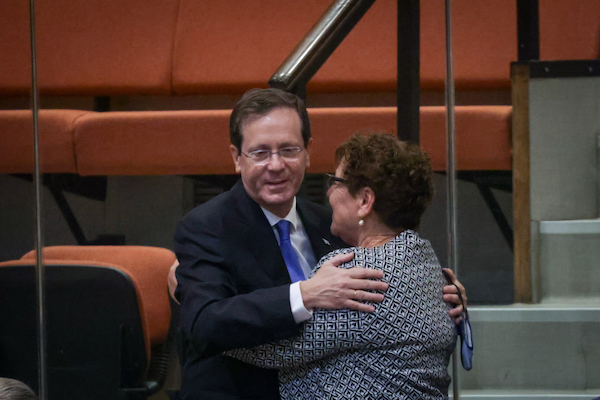 Presidential candidates Isaac "Bougie" Herzog and Miriam Peretz seen in the plenum hall of the Israeli parliament during the voting in the presidential elections, in Jerusalem, June 2, 2021. (Photo: Olivier Fitoussi/Flash90)

In 2015, Herzog challenged, but lost to Prime Minister Benjamin Netanyahu’s conservative Likud party. Since 2017, Herzog has served as the chair of the Jewish Agency of Israel.

He is now following in his father's footsteps. Chaim Herzog, who was born in Belfast, founded a prominent law firm in Tel Aviv and was also Israel’s ambassador to the United Nations, where he defended the Jewish state during the infamous anti-Semitic “Zionism is Racism” resolution that was passed by the UN in 1975.

Isaac Herzog has big shoes to fill, but he also has the experience, connections and stature which will be an asset in the office of Israeli presidency.