JERUSALEM – Millions of Israelis and Palestinians are suffering through the brutal and wrenching new war that erupted last week.

Yet they are not alone.

Indeed, as the terrorists in Gaza fired more than 3,000 rockets at Israel in the past six days – and as the Israeli military has struck Hamas and Islamic Jihad targets with deadly force – I’ve been so encouraged by hearing from Evangelical leaders and lay people all over the planet.

As Israel heads into the biblical holiday of Shavuot (Pentecost) this evening, tens of millions of Evangelical Christians are gathering in churches today in the U.S. and around the globe to obey Psalm 122:6 which commands believers to “pray for the peace of Jerusalem” and all the people of the Land. Shavuot (Pentecost), also known as the "Feast of Weeks" or "Holiday of First Fruits" commemorates the giving of the Torah on Mount Sinai.

The texts and emails have come from the U.S., Canada, Europe, Africa, the Arab world and the Far East.

A ministry leader in Paris wrote to me, “May the Prince of Peace restore peace and order and keep both Israelis and Palestinians safe, especially those who love and follow the Lord.”

An Arab pastor in Jordan wrote to me, “We pray in the name of our Lord Jesus Christ to bring peace to the area.”

“Our hearts weep with you,” wrote a woman from Canada. “We continue to pray for peace, protection and spiritual awakening.”

A grandmother in Pennsylvania wrote to me to say, “Praying for all of you. We don’t know what it is like, but I’m sure it is very scary” to be in such a war zone.

A dentist in Virginia wrote me saying, “Have been heartbroken and praying fervently for your country and ours. The world is in such a precarious balance of unrest. With each day, things just seem to get worse. Resting in the fact that our God is in control, and knows all, and will keep you safe.”

On our sister site, ALL ARAB NEWS, our lead article today is a wonderful column by a prominent Palestinian pastor based in Ramallah who is calling on Christians around the world to “pray urgently and without ceasing for peace.”

They tell me they are praying for the restoration of calm and quiet on both sides of the border.

They are also praying for comfort and healing for all those who have been physically or emotionally wounded and traumatized by the war, especially the children who are the most vulnerable. 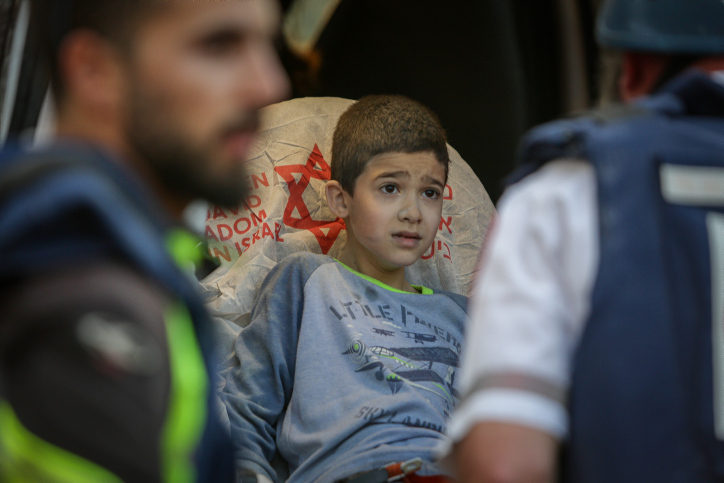 A medic carries 8-years-old Eitan Vhnstok at the scene where an apartment building was hit by a rocket fired from the Gaza Strip in Ashkelon, southern Israel, May 11, 2021. (Photo: Edi Israel/Flash90)

What’s more, they are mobilizing their families, friends, neighbors and church congregations to pray as well.

I can also report that Israelis who are not particularly religious have been deeply touched by Christians reaching out to them by email and social media, sharing Scriptures with them and promising to pray specifically for them.

One Israeli friend of mine who is an atheist wrote to me this morning, “Even as a non-believer, it gives me strength to know we have an army of Christian friends behind us.”

She then shared with me a text message she had received from a Christian friend of hers, about prayer groups that have been meeting to pray for over 20 years.

“This has to be a difficult time for you and for Israel. Below is a prayer I received at 4:30 a.m. from a dear friend of mine. She started a prayer group at her home in 2000 that still meets every Thursday night to pray for the U.S. and for Israel. During this crisis many of the group will write out prayers and text each other so we can all pray in agreement. There are numerous groups like this and that number in the thousands praying for Israel, and the Jewish people at this time.”

“Father, we stand with Israel!  We pray the Israeli leaders will not compromise an inch of their God-given promised land, in Jesus Name! We agree with Netanyahu that Israel does not fear the long road ahead! In Jesus’ Name, we resist on behalf of Israel, the spirits of antichrist, tyranny & demonic compromise over this war. Israel will be all the prophets have declared over it.  There is nothing impossible with our God!!”

Pastor Skip Heitzig was one of the first Evangelical friends who reached out to me when the rockets began.

Heitzig is a member of the board of Near East Media, the non-profit organization that oversees ALL ISRAEL NEWS and ALL ARAB NEWS. He is also the senior pastor of Calvary Albuquerque, one of the largest Evangelical congregations in the U.S. with some 15,000 attendees.

“Hamas has repeatedly demonstrated its penchant for terrorizing the citizens of the Jewish state, while the United States can only tell Israel to show restraint,” he wrote in a statement specifically for this article. “This is madness. After living in Israel and hosting several groups to the Land, I have the utmost respect for Israel’s position in this crisis. As a Christian leader, I am urging everyone to pray for the spirit of shalom – peace – to prevail in Israel, and Gaza, and for the civil unrest that is sweeping the country to cease.”

“America has historically been Israel’s best friend,” Wayne Pederson, the senior vice chairman of The Joshua Fund and a member of the board of the National Religious Broadcasters, told ALL ISRAEL NEWS. “Evangelicals care deeply about Israel’s history, culture and well-being. These days Israel is being militarily and politically bombarded on every side, and the media have proven to be no friend of Israel.” 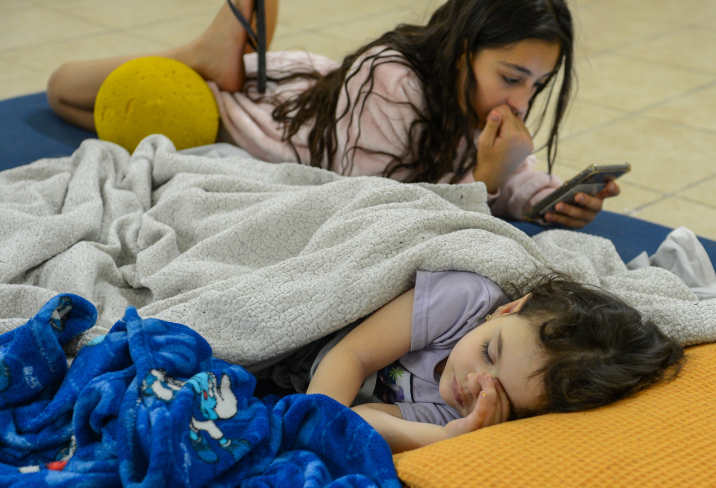 Two Jewish families spend their days in a bomb shelter as rockets are fired by Hamas militants from Gaza into the southern Israeli city of Ashkelon, May 13, 2021. (Photo: Avi Roccah/Flash90)

Saleem Shalash, Arab Israeli pastor in Nazareth, wrote to me today: “Even if the devil tried to destroy all the bridges that we build between Arab and Jews, and if he thinks he achieved his aim he is wrong. Because we will continue to fix and build all these bridges by the power of love and prayers. Prayers are the small nerve that moves the Hand of God. And it's not over until God says it's over.”

The Joshua Fund is an Evangelical group my wife and I founded in 2006 to strengthen the Church in the Middle East as well as to provide humanitarian relief to widows, orphans and the needy in Israel, the Palestinian Authority and in five neighboring Arab countries (Lebanon, Syria, Jordan, Iraq and Egypt).

“We grieve over the violence being launched by terroristic organizations,” Pederson added. “We defend Israel’s sovereignty and dignity. We’re concerned for the welfare of the people. This is the land where Jesus called home. This is where the Christian church was birthed. We call on all Christians in North America to pray for the peace of Israel – and for the innocent Palestinian people – and to speak for the people and the land whenever contrary voices are being heard.” 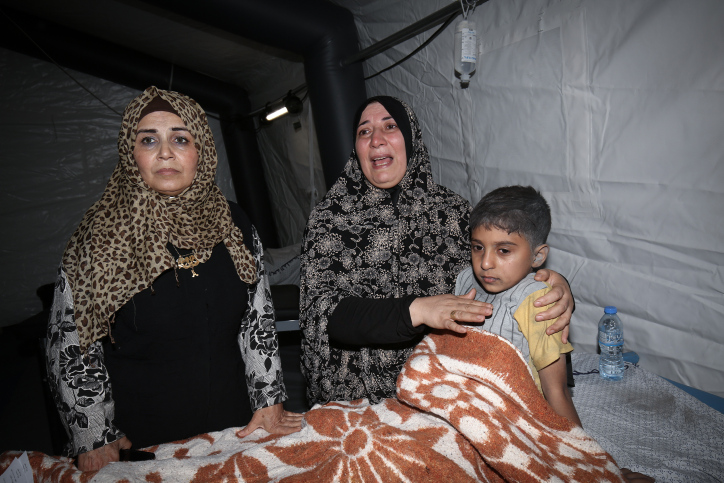 Medics tend to Palestinian children injured in the aftermath of Israeli air strikes at a make-shift hospital emergency ward in Rafah in the southern Gaza Strip, May 13, 2021. (Photo: Abed Rahim Khatib/Flash90)

Rev. Samuel Rodriguez, president of the National Hispanic Christian Leadership Conference, and a member of the ALL ISRAEL NEWS advisory board, issued the following statement in response to terror threats directed at Israel:

“Every Jew and every Palestinian is loved by God, made in the image of God, and deserves equal opportunity to realize their aspirations. There is a moral equivalency in their – and our – common humanity, but there is no moral equivalency between the actions of the terrorists in the Gaza Strip and the democratic State of Israel in defending its citizens.

“The violence and bloodshed directed toward Israel from Hamas is nothing short of terror. We are seeing precisely why Hamas has long been designated a terrorist entity by the United States. It is time for the Biden administration to step up as the leader of the free world and condemn the actions of these extremist groups with moral clarity. People of faith everywhere need to know that the United States does not look with apathy at such heinous violations of human rights.

“President Biden’s platform includes a commitment to the Jewish people and social justice but he has kept people of faith in the U.S. and across the world waiting for far too long. Over 40,000 Hispanic churches in the United States and Latin America are watching and waiting for President Biden to make good on his promise. Part of that promise is to ensure there is no daylight between Israel and the United States. One way President Biden can demonstrate that commitment is to respond to the letter issued today by over forty Senators demanding his administration immediately suspend all negotiations with Iran in Vienna, lift no sanctions on Iran and make it very clear that the United States holds Iran accountable for supplying the rockets used by terrorists in the Gaza Strip to attack Israel.”

Rev. Johnnie Moore, founder of the Congress of Christian Leaders and the former vice president of Liberty University, was interviewed for an article that was published today in The Jerusalem Post.

“Like usual, in a nanosecond, millions of Evangelicals activated” a movement of prayer for peace, “beginning with their leaders,” Moore said. “Evangelicals pressed pause on their lives to defend the State of Israel and the Jewish people against Hamas terrorists and their Iranian backers. Our community pushed back online in response to the disinformation coming from the terrorists, reached out to politicians obsessively, and this weekend tens of millions will pray for Israel in their churches.”

I’m also hearing from pastors who are preaching on Psalm 91, and friends who are sharing this psalm with others on social media.

As a pastor friend of mine here in Israel tweeted, “I can’t think of a more relevant Bible passage for us in Israel than Psalm 91.”

1 He who dwells in the shelter of the Most High
will abide in the shadow of the Almighty.
2 I will say to the Lord, “My refuge and my fortress,
my God, in whom I trust.”

3 For He will deliver you from the snare of the fowler
and from the deadly pestilence.
4 He will cover you with his pinions,
and under his wings you will find refuge;
his faithfulness is a shield and buckler.
5 You will not fear the terror of the night,
nor the arrow that flies by day,
6 nor the pestilence that stalks in darkness,
nor the destruction that wastes at noonday

7 A thousand may fall at your side,
ten thousand at your right hand,
but it will not come near you.
8 You will only look with your eyes
and see the recompense of the wicked.

9 Because you have made the Lord your dwelling place—
the Most High, who is my refuge—
10 no evil shall be allowed to befall you,
no plague come near your tent….