Shortly after the sirens, the Jerusalem Municipality clarified that no rockets were intercepted directly above the city, adding that Jerusalem Mayor Moshe Lion is being regularly updated on the security situation.

“The Jerusalem Municipality is prepared for any development,” the city said. “The emergency apparatus is on alert.”

The city called on residents to follow the directive of the Home Front Command.

So far, more than 580 rockets have been fired by Palestinian Islamic Jihad (PIJ) from Gaza into Israel, the Israel Defense Forces (IDF) said Sunday morning. More than 450 of them fell inside Israel and 120 inside Gaza, with the majority targeting Jewish communities in southern Israel.

Of those rockets headed toward populated areas, 97% were intercepted by the Iron Dome missile defense system, the army said.

However, at around 9:30 a.m. on Sunday, a rocket slammed into a home in the Eshkol region. The family was unharmed because they were in their safe room. The home sustained minor damage. Over the weekend, a direct hit on a home in Sderot destroyed one family’s home. The residents, including two children, ages 8 and 3, were in their bomb shelter and uninjured.

The IDF has focused its efforts on eliminating senior PIJ commanders and taking out key rocket and weapons sites. It said Sunday morning it had killed more than 140 senior figures, including PIJ commander Tayseer al-Jabari, head of PIJ’s northern command in Gaza, on Friday and Khaled Mansour,  head of PIJ’s southern command in Gaza, on Saturday night.

Mansour was killed along with two other senior PIJ operatives in his home.

“Yesterday, the IDF and the Shin Bet thwarted the senior Islamic Jihad leader, Khaled Mansour, the commander of the southern region of the Islamic Jihad in Gaza. This is an operational cooperation of the IDF, the intelligence agencies and the Shin Bet, with the approval of the political level,” Israeli Prime Minister Yair Lapid shared on Sunday morning, calling Mansour’s assassination “an extraordinary achievement.”

He said that the IDF will continue to “attack terrorist targets and operatives” and to “thwart launch squads,” adding that Israel is “acting in a targeted and responsible manner in order to minimize harm to those not involved.”

“We mourn for our Palestinian people in general, and for our brothers in the Islamic Jihad movement in particular, and for our Arab and Islamic nation, the commander of the southern region in Saraya al-Quds, the martyr Khaled Saeed Mansour and his heroic brothers, and all the martyrs of our pure people,” the organization wrote.

According to the Gaza Health Ministry, as of Sunday morning, IDF attacks were responsible for the deaths of 29 people, including six children, while the number of injured had reached 250.

“Whoever seeks to harm the citizens of Israel will be harmed,” Israel's Defense Minister Benny Gantz warned on Sunday. 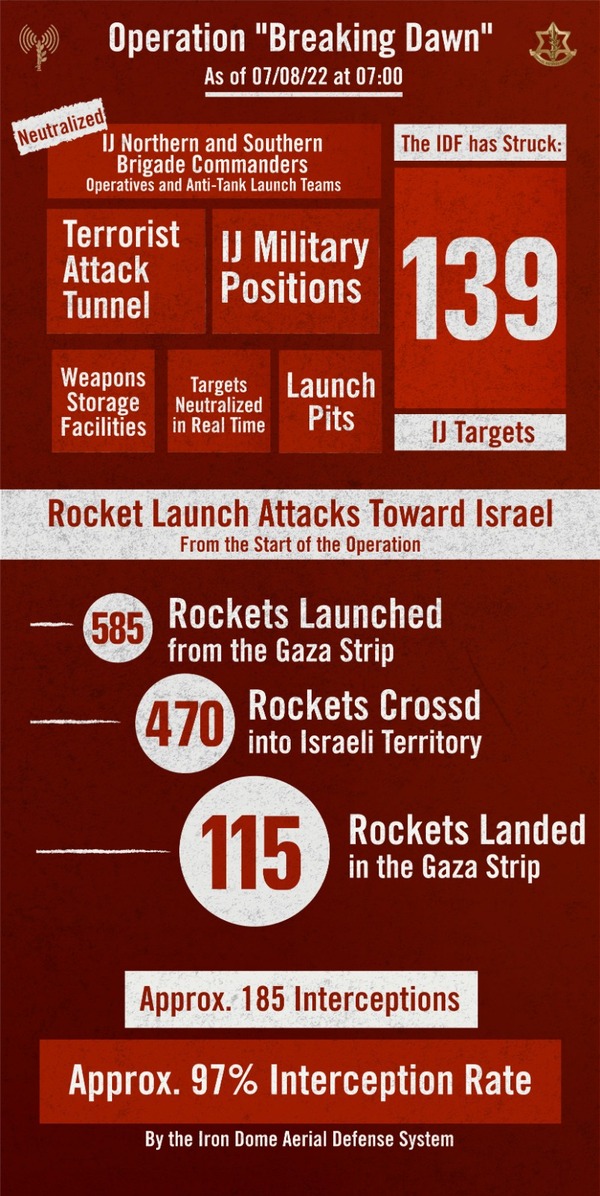