Eleven young Bahrainis and Emiratis toured Israel last month and shared their experiences on social media during a visit organized by Sharaka, a new unique organization that seeks to foster peace on the grassroots level between regular citizens of Israel, the United Arab Emirates and Bahrain.

Sharaka means partnership in Arabic and the organization consists of Israeli Arabs and Jews cooperating with like-minded Bahrainis and Emiratis.

Sharaka’s aim is to put a human face on the recent normalization deals between Israel, the UAE and Bahrain. Sharaka organized the Israel tour. The purpose was to give young Bahrainis and Emiratis the possibility to meet regular Israeli Jews and Arabs beyond politics. Prior to the Israel trip, Reservists on Duty, a group consisting of IDF veterans, visited the Gulf. Many of the individuals are involved in both groups.

“We want to make an actual warm peace,” said Amit Deri, who heads both Sharaka and Reservists on Duty.

In a Middle East where peace rarely goes beyond formal agreements between governments, the importance of Sharaka cannot be overstated. The unusually warm normalization deals between Israel and the Gulf States, contrast sharply with Israel’s formal and cold peace agreements with Egypt and Jordan.

While relations between the Israeli and Egyptian governments have improved, most Egyptians and Jordanians remain hostile towards Israel. According to a 2019-2020 survey, only 13% of Egyptians support diplomatic recognition of Israel. By contrast, Emiratis have welcomed the peace with Israel, and Israelis have been warmly received in Dubai.

The young Emiratis and Bahrainis travelled with Sharaka members all over Israel, from Jerusalem to Tel Aviv and the Golan Heights on the northern border. The group of first-time visitors to Israel consisted of journalists, artists and entrepreneurs under the age of 40. President Reuven Rivlin greeted the group, but most of the time was spent in the company of ordinary citizens from Israel’s diverse population.

The Emirati and Bahraini visitors spoke enthusiastically of their visit to Israel and their warm interactions with regular Israelis who constantly asked to have pictures taken with them.

Their time at Yad Vashem, the World Holocaust Remembrance Center, left a deep impression on the visitors from the Gulf.

“I hardly could stop myself from crying,” said Emirati social activist Majiid Sarrah.

“We are here to ensure that these kind of acts, genocides, are never going to be happening in the future,” Sarrah added. 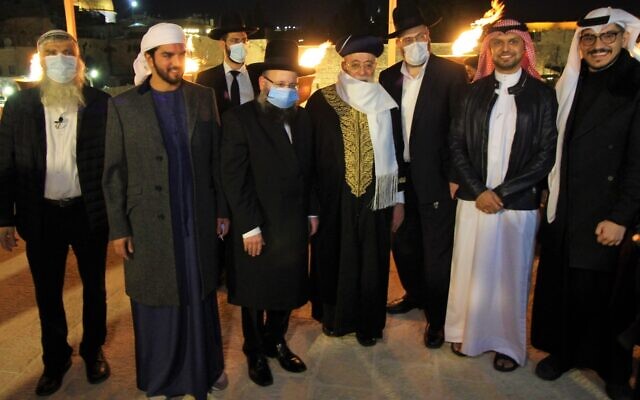 Delegation members from the United Arab Emirates and Bahrain participate in the candle lighting ceremony for the 5th night of Hanukkah at the Western Wall Plaza, Dec. 14, 2020. (Photo: The Western Wall Heritage Foundation)

While Israelis generally responded positively to their visit, some Palestinians were enraged by the Emiratis and Bahrainis' time in Israel.

During a heated i24 News debate, the former Palestinian Authority minister Ashraf al-Ajrami attacked Amjad Taha, a British-Arab political commentator and social media influencer from Bahrain. Taha, who has more than 300,000 followers on Twitter, has warmly embraced the normalization deal with Israel. Taha is also a vocal critic of Iran and the Palestinian Authority.

Taha compared the hatred to the coronavirus and stressed that the best antidote was to keep visiting Israel.

“The vaccine for peace and for this war and hate and everything is to carry on, to keep visiting Israel,” said Taha.

Despite some negative reactions, the Bahrainis and Emiratis were thrilled about the overwhelming warmth and hospitality shown by Israelis.