LVIV, Ukraine (Reuters) - A Russian air strike on a large Ukrainian military facility near the border with NATO member Poland on Sunday killed 35 people and wounded 134, a local Ukrainian official said, as other officials reported intense Russian attacks around the country.

Britain said the incident, just 15 miles (25 km) from the Polish border, marked a "significant escalation" of the conflict. U.S. President Joe Biden has said NATO would defend every inch of its territory if Russia's invasion of Ukraine spills over into member states of the Western defense alliance.

Ukraine said foreign military instructors have previously worked at the Yavoriv International Center for Peacekeeping and Security, but a NATO official said there were no personnel from the alliance there. It was not immediately clear whether any non-NATO states might have representatives there.

Regional governor Maksym Kozytskyy said Russian planes fired around 30 rockets at the facility, adding that some were intercepted before they hit. At least 35 people were killed and 134 wounded, he said. Reuters was not able to verify his statement. 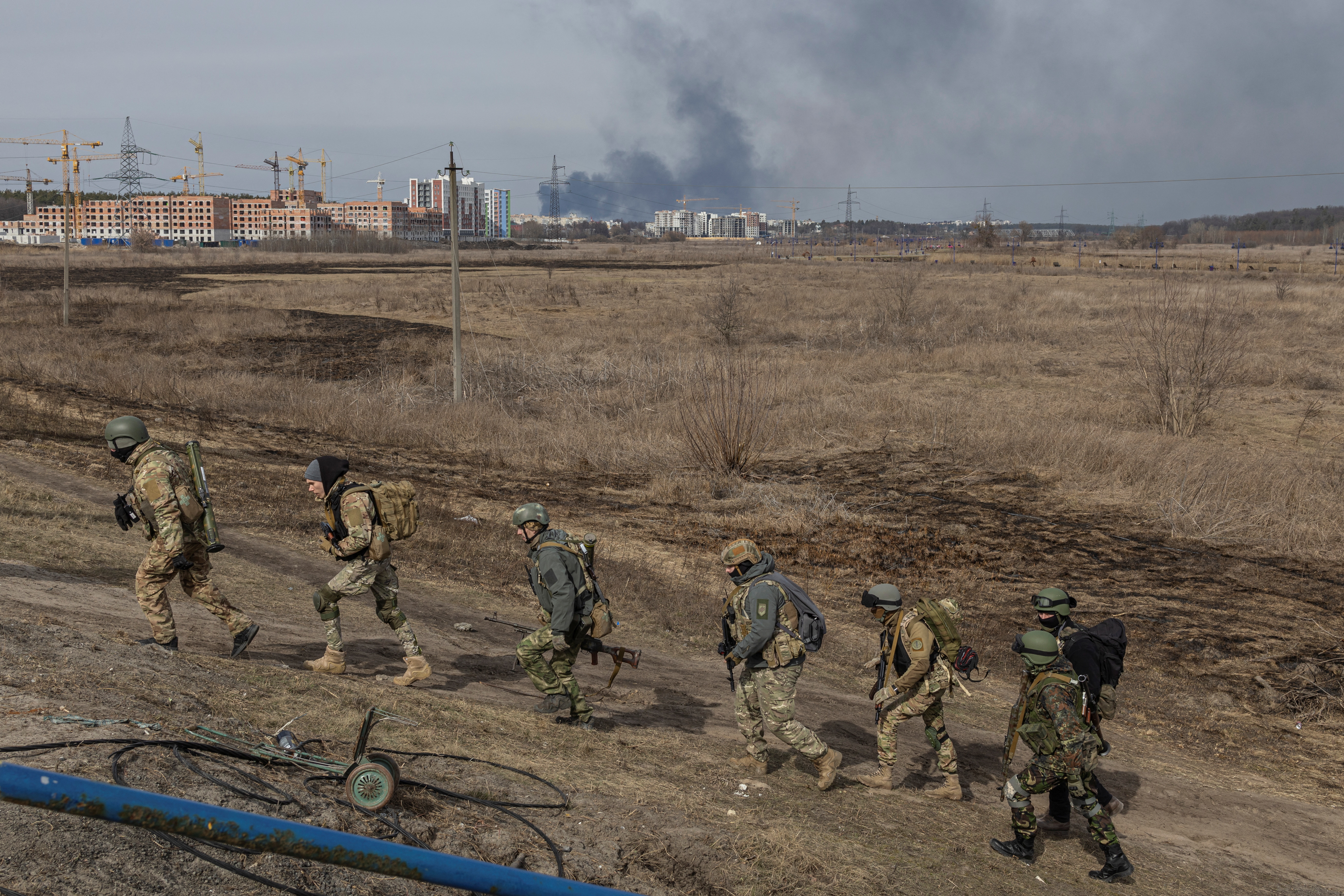 Ukrainian servicemen walk near a destroyed bridge as Russia's invasion of Ukraine continues, in the town of Irpin outside Kyiv, Ukraine, March 12, 2022. REUTERS/Marko Djurica

The 360 sq km (140 sq mile) facility is one of Ukraine's biggest and the largest in the western part of the country.

The Kremlin did not immediately reply to a request for comment on the reported missile strike so close to the border with NATO, and a short video briefing by Russia's defense ministry spokesman on Sunday made no mention of such an attack.

Nineteen ambulances with sirens on were seen by Reuters driving from the direction of the Yaroviv facility after the reported strike and black smoke rose from the area.

"Russia has attacked the International Center for Peacekeeping & Security near Lviv. Foreign instructors work here. Information about the victims is being clarified," Ukrainian Defense Minister Oleksii Reznikov said in an online post.

A Ukrainian Defense Ministry representative told Reuters the ministry was still trying to establish if any foreign instructors were at the center at the time of the attack.

Ukraine, whose aspirations to join NATO are a major irritant to Russian President Vladimir Putin, held most of its drills with countries in the Western defense alliance at the base before the invasion. The last major exercises were in September.

In the weeks before Russia invaded on Feb. 24, the Ukrainian military trained there, but according to Ukrainian media, all foreign instructors left the training ground in mid-February, while leaving all the equipment.

Russia's invasion of Ukraine, launched by Putin on Feb. 24, has sent more than 2.5 million people fleeing across borders and trapped hundreds of thousands in besieged cities.

"It is terrifying how violent and inhumane it is," Olga, a refugee from Kyiv, told Reuters after crossing into Romania.

Ukraine reported renewed air strikes on an airport in the west, heavy shelling on Chernihiv northeast of the capital Kyiv and attacks on the southern town of Mykolayiv, where officials said nine people had been killed.

Ukraine's human rights monitor said Russia used phosphorous bombs in an overnight attack on the town of Popasna in the eastern Luhansk region, calling it a "war crime." She shared a photograph purporting to show the alleged attack, but did not say if Ukraine had concrete evidence. Reuters could not immediately verify any of the reports.

Despite the violence, both sides said they thought progress could be made at peace talks. "Russia is already beginning to talk constructively," Ukrainian negotiator and presidential adviser Mykhailo Podolyak said in a video posted online.

"I think that we will achieve some results literally in a matter of days," he added.

A Russian delegate to talks with Ukraine, Leonid Slutsky, was quoted as saying they had made significant progress and it was possible the delegations could soon reach draft agreements.

Neither side said what these would cover. Previous rounds of talks had focused mainly on humanitarian issues.

While Western nations have sought to isolate Putin by imposing harsh sanctions, the United States and its allies are concerned that NATO would be drawn into the conflict. "There are no NATO personnel in Ukraine," the NATO official said, when asked if any NATO personnel were at the base.

Asked how much of an escalation the attack was, British cabinet minister Michael Gove told a BBC interviewer: "It is significant." Putin was pushing the boundaries in military terms, he said.

The mayor of Ivano-Frankivsk, another city in western Ukraine, said Russian troops also continued to hit its airport, with no initial reports of casualties.

In eastern Ukraine, Russian troops were trying to surround Ukrainian forces as they advance from the port of Mariupol in the south and the second city Kharkiv in the north, the British Defense Ministry said.

Kharkiv has suffered some of the heaviest bombardment. Videos from one resident, Teimur Aliev, who is helping bring aid to residents, show bombed buildings lining streets, burned out cars riddled with shrapnel holes and debris strewn around.

"We will stitch up the wounds and the pain of our country and our city. We are ready to build it and we are ready to renew it when the war is over. We're not going anywhere," Aliev, a 23-year-old musician, said of his food distribution network, which now has dozens of volunteers.

In Chernihiv, around 150 km (100 miles) northeast of Kyiv, firefighters rescued residents from a burning building after heavy shelling, video from Ukraine's emergency service and verified by Reuters showed.

Ukraine accused Russian forces on Saturday of killing seven civilians, including one child, in an attack on women and children trying to flee fighting near Kyiv.

Reuters was unable immediately to verify the report and Russia offered no immediate comment.

The Kremlin describes its actions as a "special operation" to demilitarize and "deNazify" Ukraine. Ukraine and Western allies call this a baseless pretext for a war of choice.

Russian troops have destroyed 3,687 Ukrainian military infrastructure facilities so far, Russian Defense Ministry spokesman Igor Konashenkov was quoted by Russian news agencies as saying on Sunday. It was not possible to independently verify his statement.