JERUSALEM—In a major escalation that could set off a full-blown war, Hamas has just fired rockets at Jerusalem from the Gaza Strip.

I have not heard the sirens go off here in a war-time situation since 2014.

An ALL ISRAEL NEWS staff member reports that an Israeli house has been struck by a rocket. We do not want to report the exact location for security purposes.

“I see smoke on the hills near us – and the electricity here has been knocked out,” he reported.

Earlier this afternoon, Hamas called for beheading Jews. In a video from a Hamas leader, Fathi Hammad, he called on the Palestinians of Jerusalem to buy knives for five shekels and behead Jews in Jerusalem.

Hammad quoted verses from the Qur’an to incite murder against Jews and was surrounded by several Hamas gunmen in the video.

Earlier this afternoon, Al-Qassam Brigades Spokesman Abu Obeida warned Israel it had until 6 p.m. to withdraw from Jerusalem or it would declare war: "The Joint Military Operation Room room gives the Israeli occupation a grace period until today, 1800 hrs, to withdraw his soldiers from Al-Aqsa Mosque and Sheikh Jarrah neighborhood."

The sirens warning of incoming rockets sounded around Israel exactly at 6 p.m. 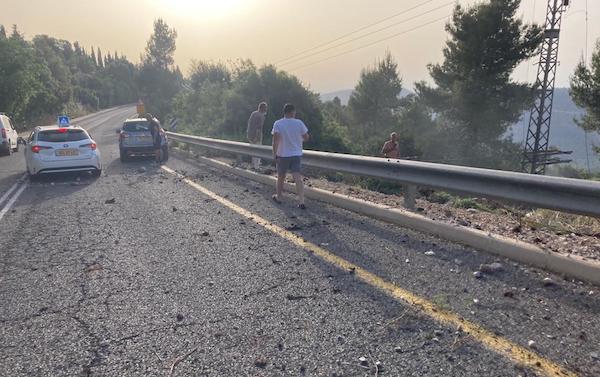 Rockets launched from Gaza land near communities in the hills outside Jerusalem, hitting a home and knocking out electricity. No injuries reported. (Photo: ALL ARAB NEWS)

The Knesset was evacuated as the warning sirens sounded.

Seven rockets were fired at Jerusalem and Beit Shemesh. Dozens of rockets have been fired at Ashkelon and Israeli communities surrounding Gaza as well.

The Israel Defense Forces is deploying more troops to the Gaza border and into West Bank. At 7:28pm the IDF told ALL ISRAEL NEWS that “more than 50 rockets have been fired at Israel so far.”

Countless sirens are sounding around southern Israel at this time.

School is cancelled tomorrow for communities all the way to Beersheva.

Naftali Bennett, head of the Yamina party and possibly next prime minister: “With Palestinian terrorism, an iron fist must be used. Anyone who puts Israeli residents in shelters should know that he will regret it. We will take determined action.”

Opposition leader Yair Lapid, who was just given the mandate to form a government, said, “No country can allow its citizens to live under the threat of terrorism. Israel must act resolutely and strongly and restore deterrence. We will collect the actions of the government in the war against the enemies of Israel.”

Gideon Sa’ar, head of the New Hope party, said: “Hamas' aggression requires a sharp response to restore deterrence and we will collect government decisions that will lead to this.”

Israeli Ambassador to the U.S. and UN Gilad Erdan said: “Israel did everything to calm the situation, in coordination with the international community, but Palestinians continue their terror. Israel will defend its citizens and expects the world to hold Palestinians accountable for this violence.”

The U.S. Embassy in Jerusalem sent out an emergency alert: “Due to recent violent confrontations, upcoming celebrations, and commemorations, the Old City is off-limits to embassy personnel through 8 a.m. on May 16. Embassy personnel in East Jerusalem and City Center advised to remain indoors from 7 p.m.-8 a.m.”