The sacrifice of a red heifer could take place on the Mount of Olives in Jerusalem as early as 13 months from now.

Texas businessman Byron Stinson – the man instrumental in locating and helping get five red heifers from the United States to Israel – told ALL ISRAEL NEWS that finding the sacrifice-ready cows was not the only objective. Boneh Israel, the organization Stinson is involved with, has also purchased land on the Mount of Olives that meets the requirements for a biblical sacrifice outside of a temple.

Stinson explained that a sacrifice does not necessitate a new temple. It can also be conducted at a certain height and direction – and the plot on the Mount of Olives meets these requirements.

“This is a big step – this is a huge sign. If we’re able to do the ceremony in a year and a half, to two years,” he said. “It doesn’t mean that the temple is going to be built within one year, 10 years or 40 years, 100 years… because you have the ashes. Solomon had the ashes of the red heifer and then lasted 1000 years.”

“The red heifer does not mean you have to immediately build. However, I think it’s like a key that turns on the engine,” he added. 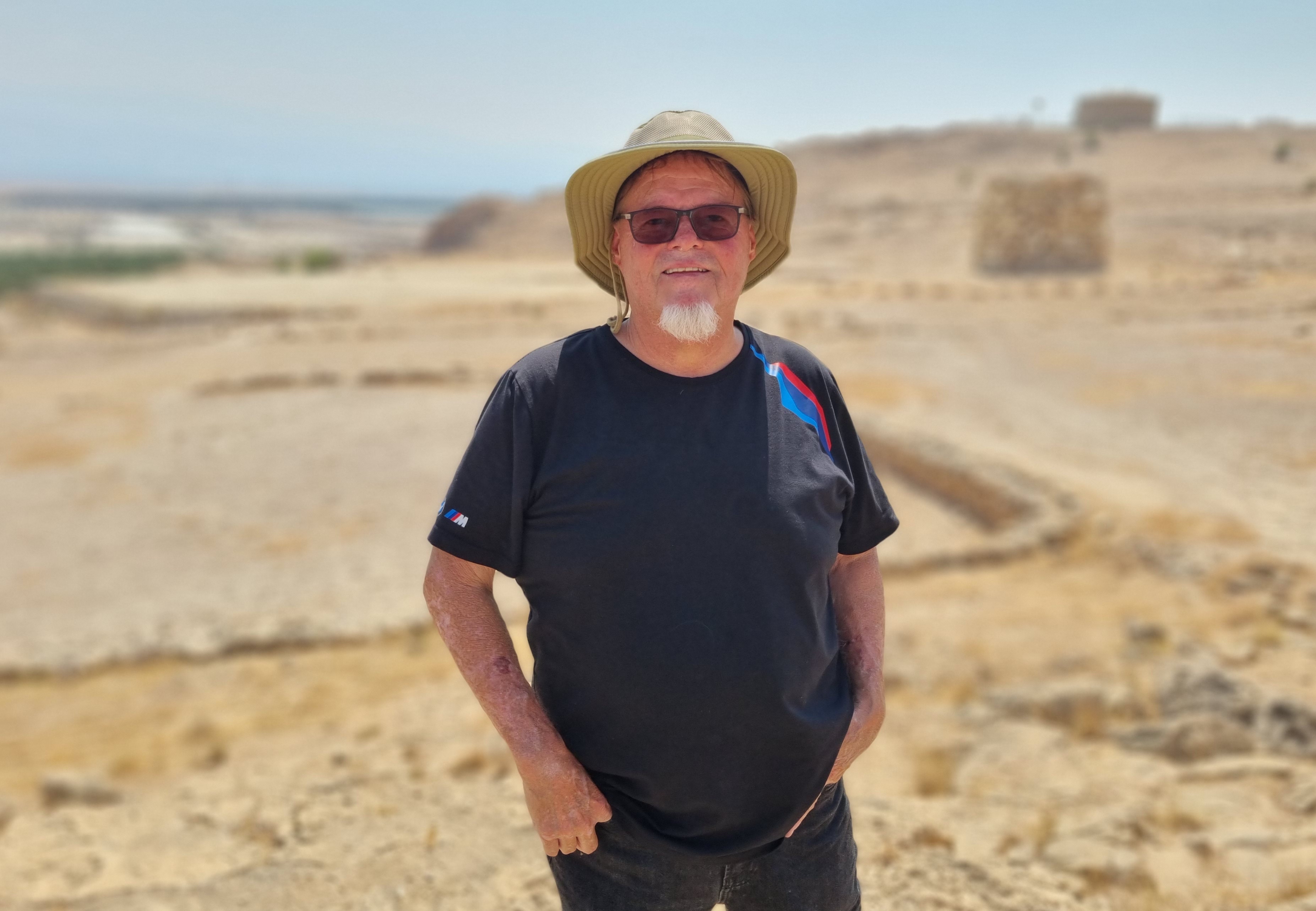 The five red heifers landed in Israel about two weeks ago to much fanfare, celebration, end-times speculation and a health dose of cynicism as well. The cows have all been determined by certain rabbis to be ritually pure for sacrifice – for now. They must stay unblemished and red in order to be sacrificed when they are older than 2 years.

Currently, the calves are all just under one year and are about to be released from a 10-day quarantine after arriving from Texas on Sept. 15.

The ashes of a red heifer are needed in order to purify the priests who would serve in the temple, according to Numbers 19. Because the entire animal is burned and the ashes stored and used sparingly – sprinkled into water from the Gihon spring – only nine such sacrifices had been performed throughout history.

[Read: What does the Bible say about the importance of the red heifer, the Third Temple and the coming of the Messiah? by Joel Rosenberg] 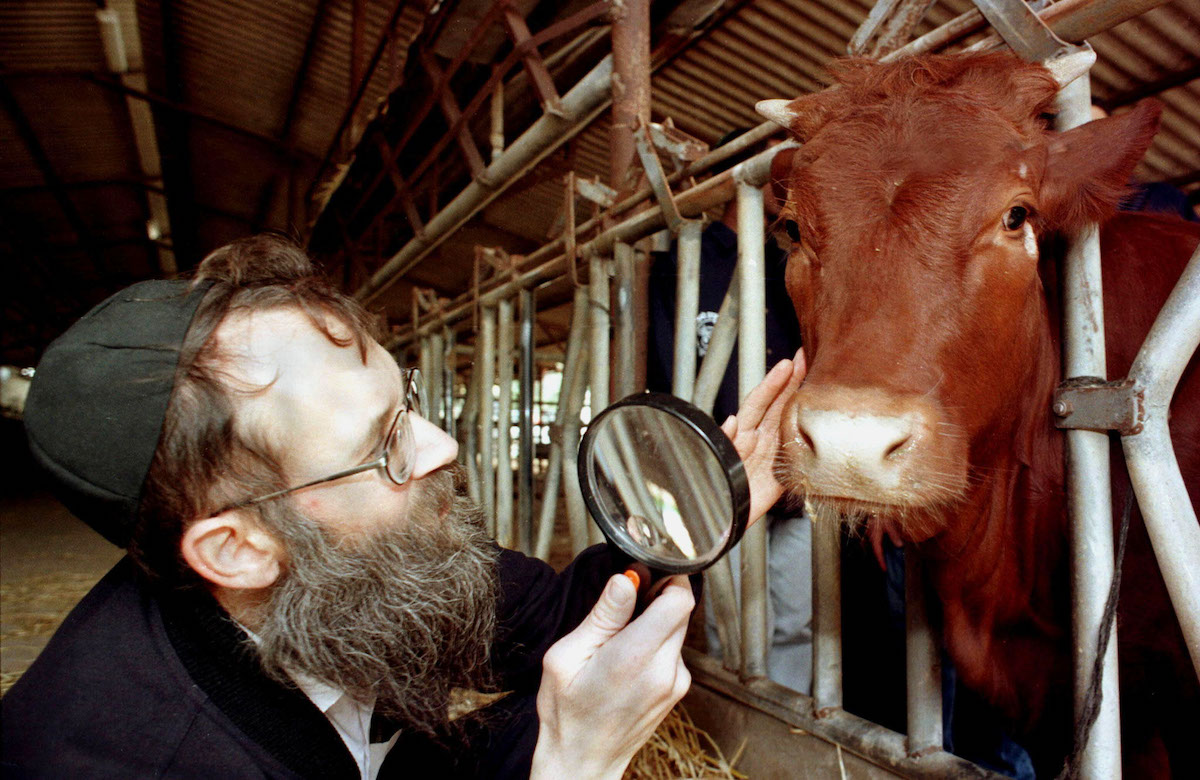 An Israeli rabbi uses a magnifying glass to examine a cow named Zippora, trying to determine whether the animal is a "red heifer," in 1997 (Photo: Reuters)

About this time next year would be the earliest time that one of them – the tenth in history – could be sacrificed. But, Stinson explained, this also leaves plenty of time for any of the five to grow non-red hairs or develop any sort of blemish that would render them imperfect for the sacrifice.

As a Christian, Stinson believes that it is his obligation to support the Jewish sacrifice even if that is not what he believes himself, because the “purpose of the red heifer is to let the veil be lifted.”

“We can support them in having this ceremony of the red heifer, the temple being built and a daily sacrifice, weekly sacrifice,” he said. “We have to have a better understanding of what God is putting into place.”

“All these things, (God) designed as a mirror image of heaven,” he said.

Stinson said he is motivated by one mail purpose: to foster unity between Christians and Jews.

He worked with rabbis from the Temple Mount Institute – an organization working to restore a future temple by crafting the physical elements as outlined in scripture and raising up priests as well. The red heifer is a big piece of that puzzle.

Nevertheless, a majority of Israelis – secular and religious alike – didn’t even hear the news that the red heifers are in the country because it was barely reported by the mainstream media. Many Israelis consider the Temple Institute to be on the fringes of mainstream Orthodox Jewry and do not align with its practices.

Christians were also galvanized by the news as it put a spotlight on end-times teachings. While Jewish sacrifices ended with the destruction of the Second Temple and Christians believe sacrifices are unnecessary because Jesus took the place of animal sacrifice when he died on the cross, the Bible does point to a temple and sacrifices reinstituted in the last days.

This is significant for many Jews who believe that one needs to be sacrificed in order to restore Levitical priesthood, build the temple and perform ongoing sacrifices in Jerusalem. For them, it means that redemption is drawing near.