With one week before Israelis go to the polls, a survey conducted by the Maariv newspaper and Walla website found that opposition leader Benjamin Netanyahu will be able to form a governing coalition, with a 61-seat majority.

The poll, published on Monday, shows that Netanyahu can form a parliamentary coalition with his own Likud party, the far-right Religious Zionism and the two ultra-Orthodox parties Shas and United Torah Judaism.

According to the poll, the current government coalition led by Prime Minister Yair Lapid would only receive 55 seats. Lapid’s Yesh Atid party is coming in second to Netanyahu’s Likud party with 23 seats, the poll says, compared to Likud's 32. 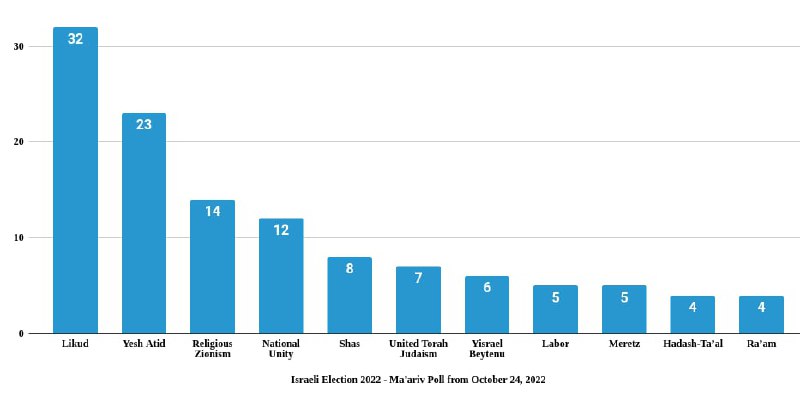 The Maariv poll is considered an outlier, as other polls have shown that Israel’s political deadlock is expected to continue after the vote, with neither side able to form a majority-ruling government.

A Channel 12 News survey published eight days before the vote, found that the Netanyahu bloc would only get 60 seats, falling one seat short of forming a majority government. The poll gave 56 seats to the parties comprising the current Lapid-led government.

Israel will face its fifth election in less than four years on Nov. 1. The nation's political landscape has shown consistent instability, in part because of the Likud party’s failure to form a government despite receiving the most mandates.

Most Israeli citizens abroad are not allowed to vote remotely. However, more than 4,500 diplomats and Jewish Agency emissaries that are deployed around the world can vote abroad and have already cast their ballots this week.