Inconclusive exit polls show that at the end of Election Day, Israel is teetering between a clear pathway to a coalition for Prime Minister Benjamin “Bibi” Netanyahu and the strong possibility of a fifth election in a few months.

Nevertheless, in a speech on Wednesday morning, Netanyahu all but declared victory, noting that Likud decisively became Israel’s largest party by a vast margin after Tuesday's vote.

"I will extend a hand to all parties," Netanyahu said noting that he already called several party heads to invite them to join his government.

He touted his accomplishments, including four peace deals between Israel and Muslim nations and his highly-promoted vaccination campaign which he credits for Israel’s dramatic turnaround of the pandemic here.

Despite Netanyahu's confidence, the delicate seesaw of Israeli politics – and the magic number of 61 – could still tip in either direction. Every seat counts with the numbers so close.

Netanyahu has already phoned Naftali Bennett, head of Yamina, who – despite his low showing of 6 seats in preliminary exit polls – is being touted as the "king maker." At the moment it appears that if Bennett goes with Netanyahu, he tilts the government to 61 seats under a Netanyahu-led coalition. 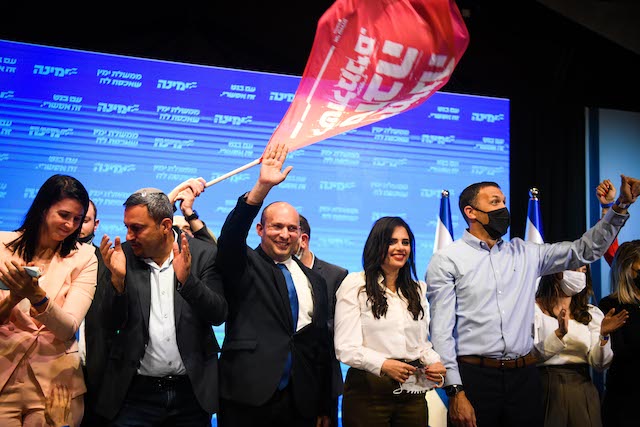 Voter turnout was the lowest it has been in the four elections of the past two years – 67.2% compared to 71.5% last year.

In Election Day coverage of the results, ALL ISRAEL NEWS Editor-in-Chief Joel Rosenberg said Netanyahu is an “iconic” leader who has a reservoir of support and experience that help him expertly navigate political opposition and controversy.

“Netanyahu’s strengths are incredibly impressive,” Rosenberg commented, pointing to his strong stance against a nuclear Iran and his influence in getting foreign embassies to move to Jerusalem and recognize the city as the capital of the Jewish state.

Despite this, the country is clearly divided on whether he is the right leader domestically. He was criticized for mismanaging the COVID crisis but he placed his bets on the vaccines and perhaps that is what paid off in the end.

Danny Ayalon, former Israeli ambassador to the United States and Knesset member, told the ALL ISRAEL NEWS panel that he believes the odds are tilting in Netanyahu’s favor.

“Those who went head to head with Bibi crashed,” Ayalon noted.

“There is a lesson to learn, that you have to show something positive and not just go negative.”

Many rival right-wing parties such as Gideon Sa’ar and his New Hope party and Avigdor Liberman of Yisrael Beytenu ran on anti-Bibi platforms. And it didn’t work for either of them.

Erick Stakelbeck, host of The Watchman, told us that it appears a Netanyahu government is on a collision course with U.S. President Joe Biden’s administration. Stakelbeck recalled the acrimonious relationship between Bibi and former U.S. President Barack Obama.

“I see this Biden administration as an Obama third term, which means there’s going to be friction,” he said.

Stakelbeck said with Biden’s eagerness to get the U.S. back into the Iranian nuclear deal and his staff pressuring Israel to move back to the 1967 lines, challenging times are looming between the two allies.

While the numbers are still not final, here is what we do know:

Parties will begin talks immediately on who to recommend for prime minister. The Israeli president, Reuven Rivlin, will take their recommendations and decide who is the best candidate to form a government and that person has three months to build a majority coalition.

Check back at ALL ISRAEL NEWS for updates and all the news as it unfolds.