Tens of thousands of Israelis gathered at Tel Aviv's centrally-located Habima Square on Saturday evening for a mass protest against proposed reforms that would give Israel’s legislative branch, the Knesset, and the government of recently-elected Prime Minister Benjamin Netanyahu greater control over the judicial system.

The crowd could be heard chanting: "Bibi go home", "Disgrace" and "Democracy" during the demonstration.

A smaller portion of demonstrators sought to block a major interchange on the Ayalon Highway, but the Israel Police put a stop to the activities. Additional protests took place in Haifa and Jerusalem, outside Israeli President Isaac Herzog’s home, according to organizers.

The protests were the culmination of growing tensions in the country following an announcement last Wednesday about “the first phase” of the government’s judicial reform plans, which would establish an override mechanism for the Knesset to reinstate laws invalidated by the court. 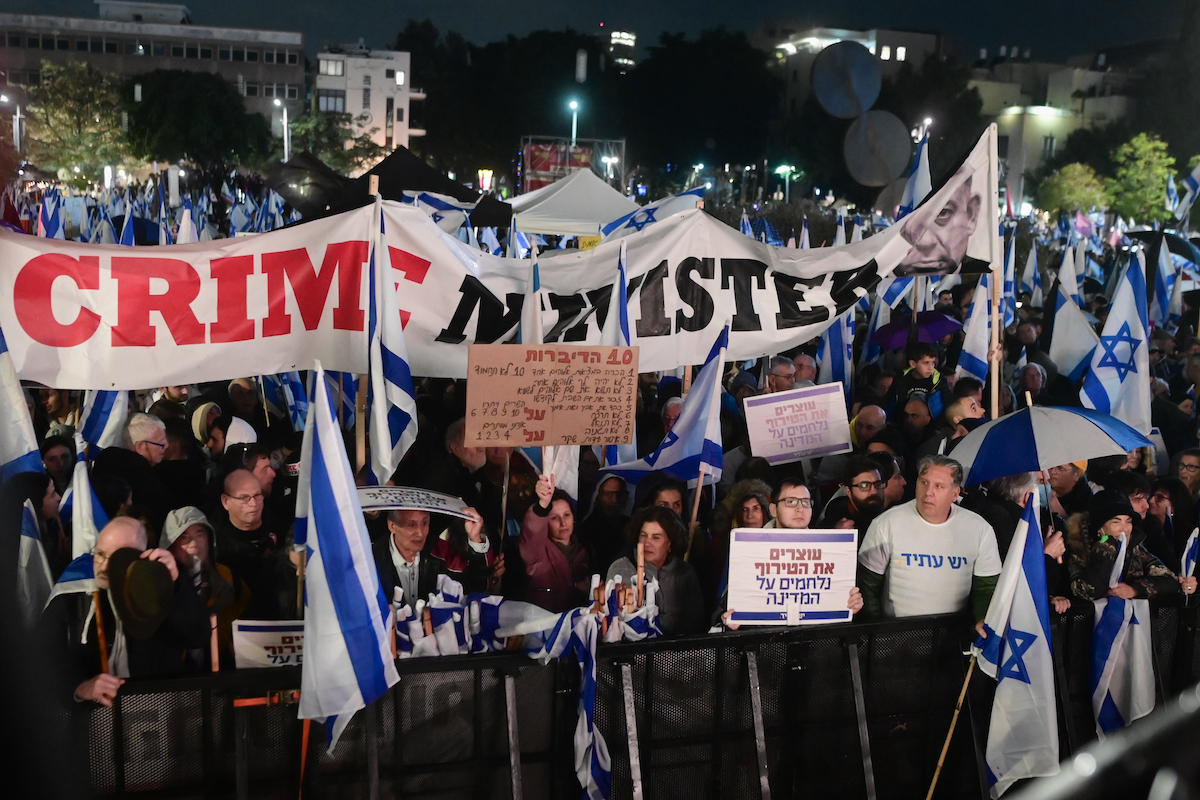 Israel’s new right-wing Justice Minister Yariv Levin and the Religious Zionism party’s Simcha Rothman, chair of the Constitution, Law and Justice Committee announced the controversial judicial overhaul would also grant the Knesset the power to overturn High Court rulings, give the coalition complete power to appoint High Court judges, severely limit the High Court from vetoing legislation and allow the parliament to re-legislate laws that the court is unable to annul with a majority of just 61 Knesset members.

Members of the opposition led the demonstration, including some of Israel’s top leaders, such as National Unity chairman and former Defense Minister Benny Gantz, Labor chair Merav Michaeli, Ra'am party chair Mansour Abbas, and many politicians from former Prime Minister Yair Lapid’s Yesh Atid party. They argue that the reforms would take away basic civil and minority rights.

At the protest, retired High Court Judge Ayala Frocaccia, now the president of the Movement for Quality Government (MKG) in Israel, spoke as an opponent to the reforms, informing protestors that "something very deep has broken in our social contract,” referring to the structure around the rules of Israel’s government for many years.

“We are at the beginning of a new era in which there is a new definition of democracy – not a democracy based on values but a truncated democracy that relies entirely on the 'will of the voter', and which no longer gives any weight to other fundamental democratic values,” Frocaccia said.

“We cannot accept as a liberal society the destruction of the values at the foundation of our system,” she continued. "We are at a crucial crossroads regarding the values of the future of the State of Israel. With joint forces, and by legal means, we will do everything to protect the values in this country, so that we have a country that is not only strong and smart, but also a good and beautiful country," Frocaccia said.

MKG’s legal representative, Eliad Shraga, led the crowd in calls for "freedom, equality, quality of government." Shraga appealed to Herzog to declare Netanyahu unfit to serve as prime minister, referring to the protest as the "beginning of the counterattack."

“A government in Israel went to war against the democratic institutions themselves, in order to rule without straits. No debate, no legitimate criticism, but political takeover. No, elections do not give those in power to destroy democracy itself,” she said. "Poison, lies, slandering each other, marking as an enemy anyone who thinks otherwise; all so that we crumble into pieces and become weaker as a society before the big attack, the dismantling of the defensive wall of democracy on all fronts.”

Protest organizers on Saturday called for police officers to “act sharply against” those who would provoke in order to "ensure the security of the protestors and allow them to fully exercise their rights to protest and their freedoms of speech."

“We are also fighting for you and your families," they told police officials.

“I also call on the police to act responsibly and professionally,” Labor party leader Merav Michaeli said in a message to police officers. “You are not tools in anyone's game. Even if the National Security Minister [Ben-Gvir] tries very hard to police you, you are the police. You are the public's gatekeepers and your responsibility is to protect the public, not to act against it.”

There were warning signs that this protest might happen last week when Netanyahu condemned former Defense Minister Benny Gantz for not taking measures to deal with the protest march which took place the previous Saturday.

During that demonstration, the Israeli government and the new justice minister were compared to Nazis. Gantz, however, said that the planned judicial reforms would push Israeli society to the brink and called for additional anti-government protests to make the country “tremble.”

On Saturday evening, the Israeli prime minister’s cousin, Dan Netanyahu, said his own mother – a former High Court judge – would have opposed the reform if she were still alive and stated that "many in Israel and in the world" see the similarity between the proposed government reforms and the "enabling act" by Nazi Germany.

Netanyahu, in support of his new government plans, argues that these judicial reforms will bring a balance to Israel’s powers, stating that increasing political power over the judiciary “doesn’t destroy democracy” but rather “rehabilitates” it.

A 2012 video clip on social media shows the prime minister proudly renouncing similar judicial proposals, promising to oppose any bills that would jeopardize the court’s independence.

“I believe that a strong, independent court allows for the existence of all other institutions in a democracy,” Netanyahu during the speech.

“I ask that you show me one dictatorship, one undemocratic society, where a strong independent court system exists. There’s no such thing.”