JERUSALEM — Many Christians around the world have already taken down their decorations, but — not so quick: Today is Christmas Eve for the few thousand Armenians who live in Jerusalem.

When most of the world switched to the Gregorian calendar in 1582, the Orthodox churches stuck with the Julian calendar. But while the other Orthodox churches moved the date of Christmas back 13 days to make up for the discrepancy of the two calendars, the Armenian Patriarch in Jerusalem did not.

Hence, Dec. 25 for the Catholics and Protestants, Jan. 7 for the Orthodox churches but Jan. 19 for the Armenians — but only those in the Holy Land.

In a normal year, Armenian scout groups would be marching from the Old City convent to the Holy Sepulcher, and again in Bethlehem to the Church of the Nativity. The social clubs would host large parties for the community. And of course families would gather for a holiday meal at a restaurant or at their homes. 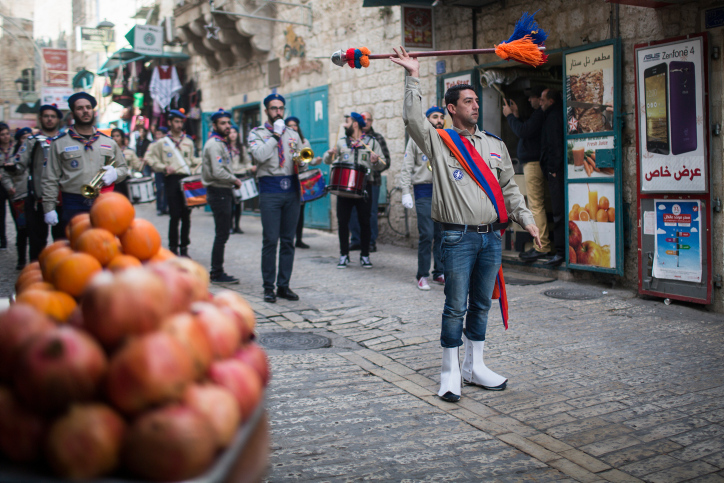 Jerusalem Armenian scouts participate in the ceremonial welcome march at Manger Square by the Church of Nativity, as the Armenian community of Jerusalem celebrates Christmas in Bethlehem on Jan. 18, 2016. (Photo: Hadas Parush/Flash90)

But this year, even while Christmas is happening under a national lockdown in Israel, COVID is not the culprit for the solemnity of the season right now among Armenians.

The heavy toll of war between Armenia and Azerbaijan that lasted six weeks last fall is still echoing in the community here causing many Armenians in the Holy Land to mark Christmas in a solemn, rather than festive, manner.

“If I didn’t have a daughter and I wasn’t married I wouldn’t even have put up a tree,” one Armenian Jerusalemite told ALL ISRAEL NEWS. “Yes, it’s a Christian thing. Yes, Jesus was born. Yes, we go to the mass and pray. But as for celebrations, we can’t.”

He asked to not be named because his wife’s family lives in Armenia and has been affected by the war.

Annie Kahkedjian, who also lives in Jerusalem, said that she normally puts up a big tree in her home, but this year she donated it to an Armenian society and her family gave money to help the victims in Armenia.

“Usually I decorate the house, but this year I didn’t. i just got a small white tree to give me the significance of a new year and light and hope, but I didn’t decorate because of the war,” she shared.

At the beginning of the war, she read all of the news coming out of the conflict that raged in the Nagorno-Karabakh region.

“It depressed me,” Kahkedjian said. “I used to cry every night.”

Israel is in the midst of a national lockdown due to rampant COVID infections. Kahkedjian was debating whether to travel from Jerusalem to Jaffa to see her elderly parents on Christmas day. She would be risking a 5,000-shekel fine because of the lockdown by leaving her 1-kilometer radius.

“If I see the light in my parents’ eyes, enjoying our company, no money can buy that,” she said. “It’s a sad holiday this year, but maybe it helps us appreciate family more.”

The smallest of the Old City’s quarters, the Armenian Quarter has been an established community since the nation of Armenian declared Christianity its state religion in the year 301 and countrymen began making pilgrimages to Jerusalem.

The quarter is centered around St. James Cathedral, built in the 12th century. Most of the residents live within the convent which also contains a private school — St. Tarkmanchatz, a library, soccer field and another chapel, the Church of the Holy Archangels.

The convent is private and, unlike the other areas of the Old City, most of the Armenian Quarter is inaccessible to outsiders.

Armenian is the primary language of the residents most of whom also speak Arabic, Hebrew and English.

Thousands more Armenians fled to Jerusalem after the Armenian Genocide which began in 1915. Some 1.5 million Armenians living in what is now modern day Turkey were killed in a systematic execution of the Christian minority forcing a massive migration of those who were fortunate to escape. Armenians settled in Syria, Jordan and Lebanon as well.

At its height, 25,000 Armenians lived in Israel. But in recent years, the population of Armenians is estimated at just a few thousand with estimates ranging between 2,500 to 8,000 around the country, mostly in Jerusalem with smaller communities in Jaffa, Ramle and Haifa.