JERUSALEM — In less than one month since the rollout began, Israel has vaccinated some 30% of all Israelis eligible to receive the COVID-19 vaccine — far outpacing the rest of the world in the drive to administer the inoculation.

As of Thursday, just more than 2 million people received at least the first dose of Pfizer’s coronavirus vaccine while many are already on their second round. Next week the vaccines will be available to anyone age 45 and up.

The government expects to have vaccinated the entire eligible population by the end of March.

Considering Israel has a population of 9.23 million, of whom some 2.6 million are too young for the vaccine, the number of eligible citizens is 6.63 million. The campaign, which began on Dec. 19 with the prime minister himself taking the first shot, has taken the slogan Operation Warp Speed — U.S. President Donald Trump’s name for the vaccine’s development — to an all new level.

“If we all make sure to follow the rules and sign up for vaccination, we will be the first country to leave this situation behind,” Prime Minister Benjamin Netanyahu said. “We will shorten the lockdown as much as possible, but we will need cooperation.”

In a country where appointments for medical specialists, tests and procedures can be stymied by bureaucracy and waiting for hours at a doctor's appointment is normal, Israel’s health maintenance organizations have carried out the vaccination campaign with remarkable efficiency. Just yesterday, more than 190,000 vaccines were administered.

Temporary clinics have been set up around the country at unused arenas and other sprawling buildings. Each HMO has a section of the building where people can come in and get their shot. There have also been reports that at the end of the day, nurses will step outside and offer the extra vaccines — that would others spoil by the next day — to anyone in the vicinity.

Netanyahu and Health Minister Yuli Edelstein, both of whom have received the second dose, have appeared for photo opps every day at a different vaccination clinics around the country and have been present at the airport as pallets of vaccines arrived in Israel.

Always quick to highlight his role in purchasing the vaccines and to refer to the Pfizer CEO Albert Bourla as his “friend,” Netanyahu is personally pushing the rollout. As elections are looming March, many see this as Netanyahu's campaign strategy to take credit for pulling Israel out of this pandemic that has sent unemployment skyrocketing to over 20% and has resulted in record-high bankruptcies of small businesses. 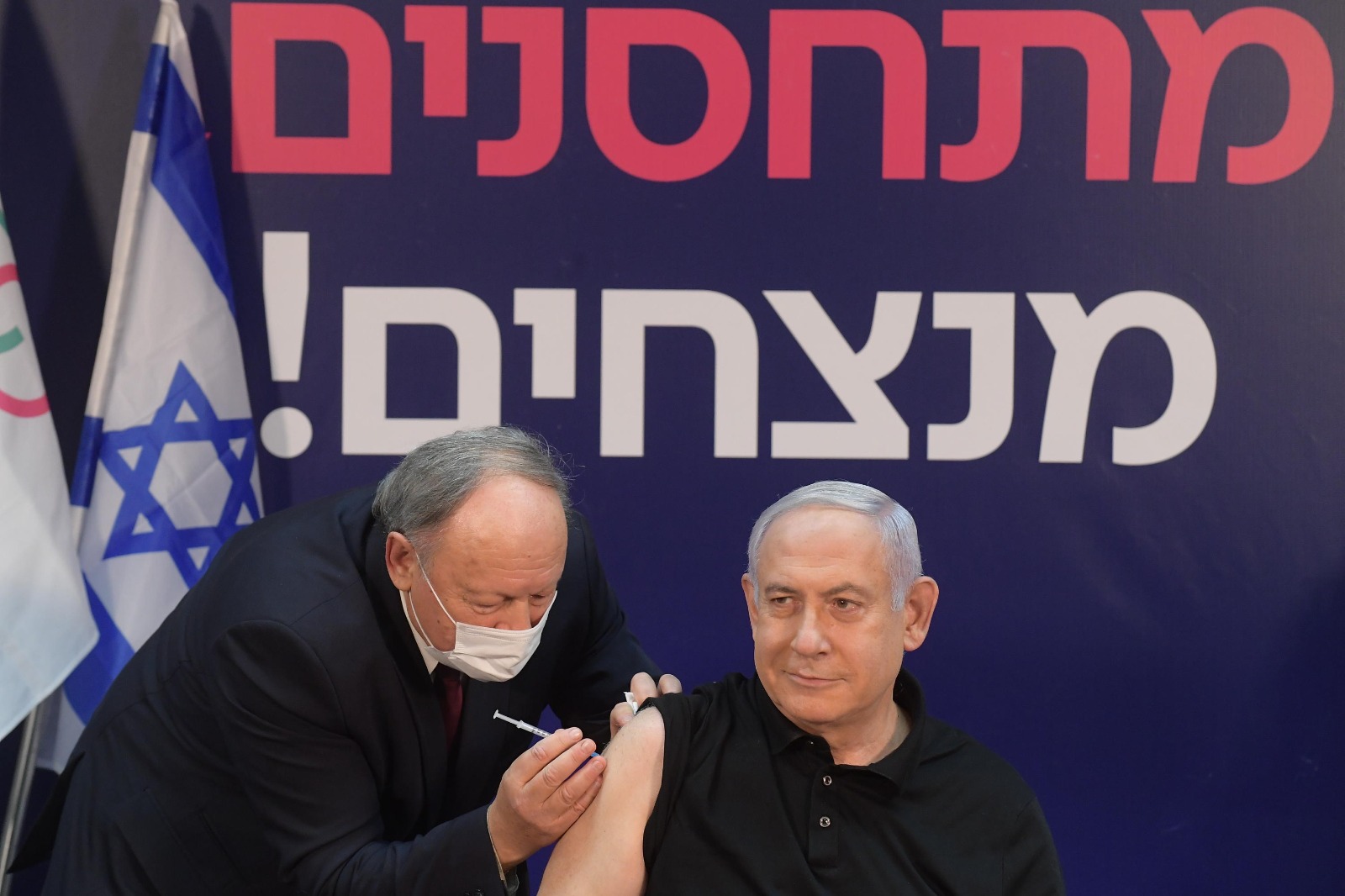 Prime Minister Benjamin Netanyahu was the first person in Israel to receive the anti-coronavirus vaccine on Dec. 19, 2020. (Photo: Amos Ben-Gershom/GPO)

Netanyahu is taking this vaccine drive to the bank — literally. Israel is reportedly paying $47 a person ($23.50 a dose) for both the Pfizer and Moderna vaccines, which is more than other countries, according to Israel’s Kan broadcaster.

That is a total cost of $315 million, the station reported.

Not only is Israel paying a higher price the most countries, but it will also share medical data with Pfizer in exchange for getting the vaccines first.

Officials insist this is not a breach of privacy.

Tehilla Shwartz Altshuler, a senior fellow at the Israel Democracy Institute, noted that public information is already available so it would be of no value to the pharmaceutical company. She told The Times of Israel, that Netanyahu must be transparent about what was written in the agreement with Pfizer.

“Bibi feels that my health data belongs to him,” she said, referring to Netanyahu by his nickname. “If you give someone else or give away my medical records — which are the most sensitive kind of data that someone can know about me — you need my permission. Why didn’t you ask for my permission?”

While the vaccines are being rolled out at lightning speed, new coronavirus cases in Israel have topped 9,000 four days in a row, with 9,172 new cases reported Friday morning, according to the Health Ministry — around 7.7% of tests. Some 1,141 of current patients are in serious condition, with 291 intubated. The death toll is currently at 3892.

Israel is three weeks into a third nationwide lockdown, which was tightened a week ago and is supposed to end on Jan. 21. Health officials have said the lockdown — which included school closures and only essential stores open — will likely be extended beyond the original date. The second lockdown, which began on Sept. 17, never fully ended and some establishments have been closed since then. Tourism and cultural outlets have been closed since March.

With this latest lockdown proving to be ineffective in stemming the spread of new COVID infections, Israeli police have set up 25 checkpoints on major roadways around the country to limit inter-city travel and will step up enforcement over the weekend.