Today’s front-page of Israel’s most popular Hebrew newspaper, Yedioth Ahronoth, shows a picture of a 34-year-old Arab-Israeli mother and her 14-year-old daughter who were tragically murdered this week in central Israel, with the headline “Where is the Police?” (?איפה המשטרה) or “Eifo HaMishtara?” in Hebrew. The twin sister, who survived the attack, was seriously injured and remains hospitalized.

Are the police really to blame for the increase in lawlessness in the Arab-Israeli community? No. Are there other root causes that have led to a culture that uses violence and murder as their means to solving disputes or preserving family honor? Yes.

However, because of the power of the media, today's headline displayed on newsstands around the country, is unfortunately influencing our society in the wrong direction. I would love to see an alternative headline on the front-page of Yedioth Ahronoth such as “Where is forgiveness?” or “Where is basic human dignity?”

Sadly, this murder in the Arab-Israeli community is not an isolated case. There have been over 75 Arabs murdered by Arabs so far this year to date, of which 71 are Israeli citizens according to the Abraham Initiatives, and there’s a sense in Israel that things are spinning out of control. Earlier this week, a 45-year-old prominent independent Arab-Israeli journalist, who often covered stories involving violent crime, was gunned down in cold blood in the Haifa district of Umm al-Fahm.

Israel’s leading English newspaper, The Jerusalem Post, also chose to focus its lead story on the non-stop violence among Arab citizens within the country’s green line. Their headline cites Arab-Israelis who claim that “Violence will stop when it reaches Jewish areas." 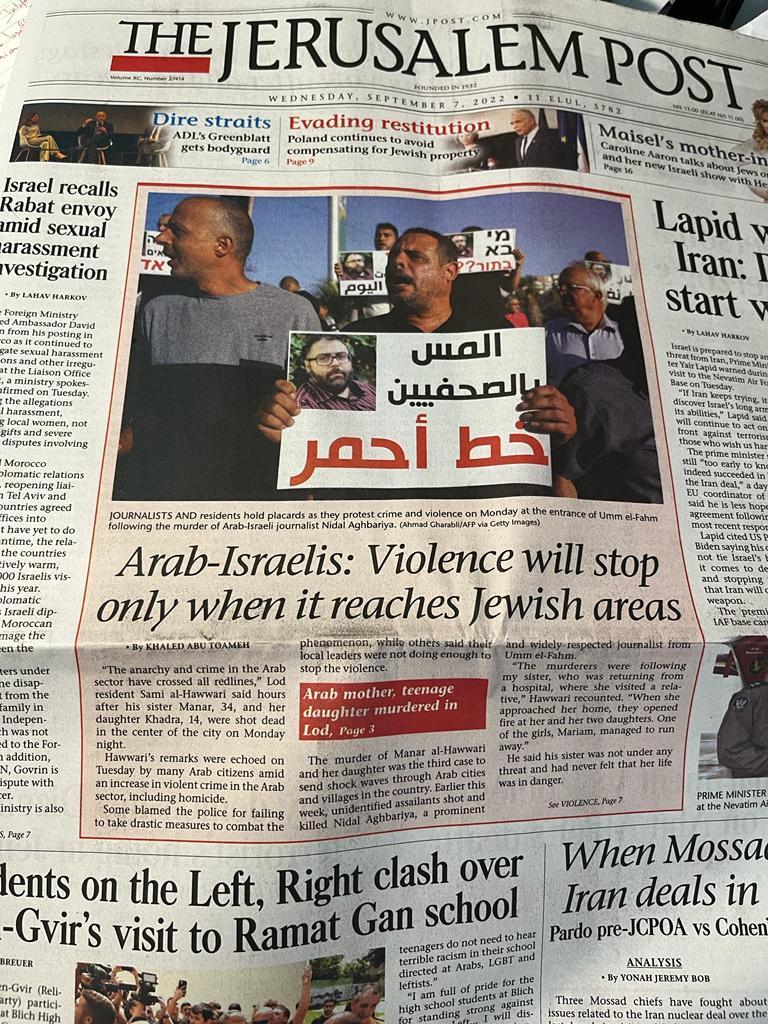 This irrational claim that an increase in violence within the Jewish Israeli community will decrease (or stop) the violence in the Arab-Israeli community is both illogical and counter intuitive. The accusation again is to ignore the root causes and blame others for the rise of lawlessness.

There is only so much that the police can do, and while they are accused of inaction and complicity, no one can deny the ingrained mentality of revenge and the extreme of protecting one’s honor, even to the point of murder, all of which contribute to the unending cycle of violence. Without the community’s rejection of these behavioral codes, a human man-made solution may not be possible.

The only solution to the increase of lawlessness and wickedness is a spiritual transformation of the heart. The core issues of forgiveness, compassion, love, acceptance, and other attributes of faith are the anchors of any society which hopes to live in peace. It is only through knowing God, His love and His depth of grace which can change an entire population. Ephesians 2:14 says, “For He, Himself is our peace, who has made us both one and has broken down in his flesh the dividing wall of hostility.” We are free from hostility and revenge just by the act of appropriating God’s peace. This is the only possible solution to end the cycle of violence, which has inflicted itself upon the Arab-Israeli community, by making a sharp turn toward the God of peace whose extended hands are reaching out with infinite and unconditional love.