The semi-annual Birkat HaKohanim drew a smaller crowd than usual on Monday with a few thousand Jews attending the Priestly Blessing at the Western Wall as opposed to the usual tens of thousands.

Tensions have been simmering due to violence that has taken place on the Temple Mount during Ramadan, the Muslim fasting month, and Passover, one of the high Jewish holidays. Because of this convergence of holidays, police decided that the Blessing ceremony take place twice – on Monday and Wednesday – in order to facilitate smaller crowds at each one. The Priestly Blessing also is held during the week of the Sukkot holiday. 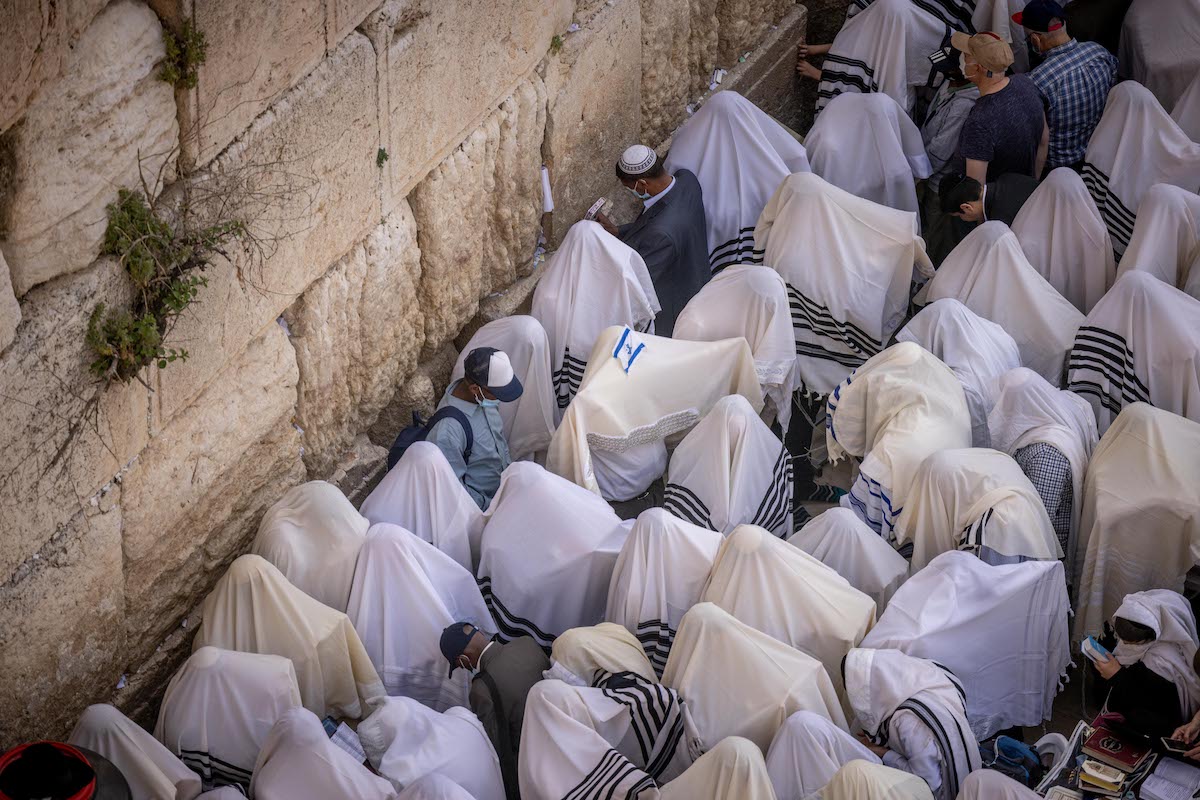 Jewish worshippers cover themselves with prayer shawls as they pray in front of the Western Wall, Judaism's holiest prayer site, in Jerusalem's Old City, during the Aaronic Benediction (Birkat HaKohanim) during Passover, April 18, 2022. (Photo: Yonatan Sindel/Flash90)

Clashes occurred at al-Aqsa Mosque on Friday when hundreds of Muslims fought with police at the site. Videos from the scene showed Muslims had stored rocks in the mosque and threw them at Jewish worshippers at the Western Wall on Friday prompting police to raid the compound. Police used tear gas and made several arrests.

Police entered the compound again on Sunday after suspecting Muslims of planning to block non-Muslim visitors to the site. Some threw rocks at Israeli buses outside the Old City, wounding several passengers.

“The UAE strongly condemned today Israeli forces’ storming of al-Aqsa Mosque, which resulted in the injury of a number of civilians,” the United Arab Emirates’ Foreign Ministry said in a statement, stressing that “Israeli authorities should respect the right of Palestinians to practice their religious rites and halt any practices that violate the sanctity of al-Aqsa Mosque.”

“Furthermore, the UAE underscored the need to respect the custodial role of the Hashemite Kingdom of Jordan in accordance with international law and the historical context at hand and not to compromise the authority of the Jerusalem endowment that manages the affairs of al-Aqsa Mosque,” the statement continued.

Morocco used even stronger language calling the incident an “incursion by Israeli occupation forces into the al-Aqsa Mosque, their closure of its gates and their aggression against unarmed worshipers in the mosque compound.”

The statement continued that it “believes that this flagrant aggression and deliberate provocation during the holy month of Ramadan will only inflame hatred and extremism, and reduce to nothing the chances of any relaunch of a peace process in the region.”

The United States also expressed concern. The State Department issued a statement calling on all sides “to exercise restraint, avoid provocative actions and rhetoric, and preserve the historic status quo on the Haram al-Sharif/Temple Mount.”

“We urge Palestinian and Israeli officials to work cooperatively to lower tensions and ensure the safety of everyone,” the statement noted. “The State Department is closely following developments and will continue to be in close contact with senior Israeli and Palestinian officials to seek to deescalate tensions.”