Israeli President Reuven Rivlin and IDF Chief of Staff Aviv Kochavi are traveling in Europe to speak with leaders about the Iranian nuclear program, Hezbollah, COVID-19 vaccination distribution and the International Criminal Court’s (ICC) decision to probe alleged Israeli war crimes during the war with Hamas in Gaza in 2014.

Austrian President Alexander Van der Bellen welcomed the two on Wednesday at the presidential palace in Vienna and the two presidents also delivered remarks at a Holocaust victims’ memorial ceremony.

But the main issue was regional security, particularly as it pertains to Iran.

“The State of Israel reserves the right and the duty to protect its citizens from all threats – from Iran and from the terrorist organizations active in the region,” Rivlin said. “The international community must recognize the threat Iran poses and take an uncompromising position on its nuclear project and its support for terrorist organizations. This is where we need the intervention of the international community – not in the field of international law which is being cynically exploited for political means in order to weaken the State of Israel.” 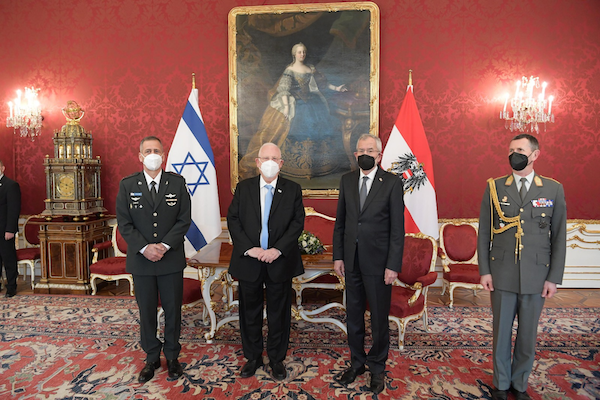 President Rivlin was welcomed in Vienna in an official reception ceremony and held working meetings with the President and the Chancellor of Austria (Photo: Amos Gen-Gershom/GPO)

While the Israeli presidential role is largely ceremonial, Rivlin has developed close ties with several European and international leaders during his presidential tenure.

On Tuesday, Rivlin and Kochavi traveled to Germany for the first leg of their European tour where German President Frank-Walter Steinmeier welcomed Rivlin at his presidential residence at Schloss Bellevue in Berlin.

Steinmeier praised Israel’s successful vaccination program and stressed that Germany and other countries could learn from Israel’s experience. Regarding Iran, Steinmeier emphasized that Germany is committed to preventing Iran from developing nuclear weapons.

“The international community must speak decisively and stand uncompromisingly against a nuclear Iran. We are counting on our friends in Europe,” Rivlin said.

“Your true friendship for us is expressed not only in words, but also in deeds,” Rivlin said.

During the meeting, the IDF chief briefed the German foreign minister on the Iranian nuclear program and the serious flaws in the original 2015 Iran nuclear deal.

Unlike 2015, when Israel and the Sunni Arab states were largely frozen out of the Iran negotiations, the Biden administration and the European states today have expressed more understanding of Israeli and Sunni Arab concerns with Tehran’s nuclear program and aggressive policies throughout the Middle East. In January, French President Emmanuel Macron even stated that Saudi Arabia, one of the leading Sunni Arab states, should be involved in any potential new Iran talks.

Iran is reportedly currently using 174 advanced centrifuges to enrich uranium at its underground Natanz plant in violation of the nuclear deal, according to a newly-leaked UN atomic watchdog report. Tehran is reportedly planning to install an even larger quantity of advanced centrifuges, which could dramatically reduce the Iranian regime’s breakout time to develop its first weaponized nuclear device.

“We are proud of our soldiers, our sons and daughters, grandsons and granddaughters. They protect us from our enemies and we will protect them from this decision,” stated Rivlin.

“We trust that our European friends will stand by us in the important fight on the misuse of the International Criminal Court against our soldiers and civilians,” said Rivlin.

The IDF chief emphasized the fundamental differences in values between Israel and her enemies.

Kochavi urged Germany to lend its support to Israel, stressing that German and other Western militaries could be the next targets facing serious but baseless war crime accusations.

After the visits to Germany and Austria, Rivlin and the IDF chief will travel to France for talks with French President Emmanuel Macron.