As in any modern country, people wave flags and sing patriotic songs and celebrate the nation’s “chalutzim” – it's pioneers and founders – in Israel’s case, Zionist leaders like Theodor Herzl and David Ben-Gurion who helped rally Jews (and Christian Zionists) around the world to believe that a Jewish state should be re-established, could be re-established, and had to be re-established in the Holy Land.

Often lost amid such celebrations, however, is the role that the God of Israel played in re-establishing the State of Israel.

This may surprise Evangelicals who love Israel so much, but it’s true.

Most Israeli leaders historically haven’t spoken much publicly about the role God plays in the modern history of the Jewish people.

There are various reasons, which I should explore in a future column.

For now, I just want to note the fact that I don’t hear many senior officials here talk about the rebirth of Israel as a fulfillment of Bible prophecy.

That’s why it was both surprising and refreshing to hear Israel’s new President – Isaac Herzog – powerful speech at Yad Vashem (our Holocaust Memorial and Museum) last Wednesday night.

After leading our “Abraham Accords Delegation of Evangelical Business & Media Leaders” to meet with senior officials in Bahrain and the United Arab Emirates, our first major meeting here in Israel was at the big Yom HaShoah ceremony, which is broadcast live each year to the nation.

It was a powerful speech in many respects, and I commend the full text to your attention.

What especially drew my attention was the number of Bible verses that President Herzog cited, and that he explicitly and unapologetically stated to the Israeli people, and the world, that the ingathering of the Jewish people to the Holy Land after the Holocaust and the rebirth of the sovereign nation State of Israel in May 1948 was the fulfillment of ancient Bible prophecies.

“The State of the Jews arose as a lighthouse expressing the victory of light over darkness and promising that never again will a Jewish child hide in a dark and isolated cellar from those who want him dead,” Herzog declared. 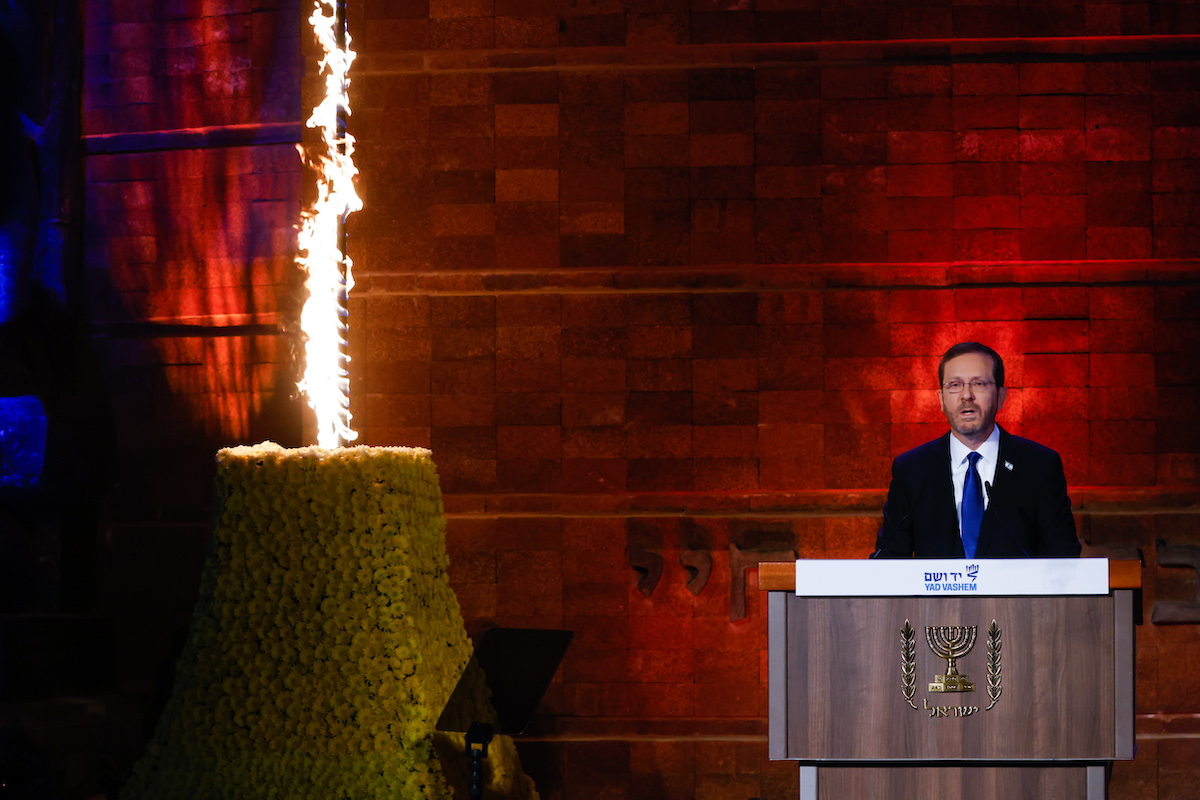 “Never again will parents be torn apart from their children and sent on their final steps, simply because they are Jews. And never, ever, will depraved murderers stand behind a Jewish family, shoot them, and dispatch them into the valley of the shadow of death….”

“We stand no chance, nor have we any justification as a people and as a state, if we do not remember forever what happened to our people, in the ghettos, in the basements of the Gestapo, in the execution pits, in the death trains, in the extermination camps, in the crematoria, and in every other place where the image of humanity was lost and no trace of compassion survived….Our dear Holocaust survivors, even as your numbers dwindle, our obligations toward you only grow, and they must be seen and heard from every edge of the earth. You are the pillar of fire before our camp. You provide us with inspiration and hope, and you instill in us faith in the righteousness of our cause and in our willingness to move forward.”

Herzog explained that old, dusty, black and white photographs from the Holocaust tell the powerful story – as sad and tragic as the Holocaust was – of God’s faithfulness to the Jewish people, to bringing us back to our homeland in fulfilment of those Biblical promises made to Abraham, Isaac, Jacob, Isaiah, Jeremiah, Ezekiel, and so many others.

We must, Herzog said, continue to tell this story.

“As the Bible says: ‘Thus said the Lord GOD: I am going to open your graves and lift you out of the graves, O My people, and bring you to the land of Israel… I will put My breath into you and you shall live again, and I will set you upon your own soil.’ (Ezekiel 37:12-14)”

FORMER PRIME MINISTER NETANYAHU ONCE SPOKE ABOUT EZEKIEL 37 AT AUSCHWITZ

While Herzog is one of the few Israeli leaders to openly speak about the fulfilment of Bible prophecy, he is not alone.

I recall back in January 2010 speaking at Break Forth, the largest Evangelical conference held in Canada every year.

That morning, I had planned on teaching on the prophecies of Ezekiel 36 and 37.

What I had not planned on was awaking to the news that then-Israeli Prime Minister Benjamin Netanyahu had just spoken in Poland to commemorate the 65th anniversary of the liberation of Auschwitz and had cited those prophecies himself.

Speaking on the actual site of the Nazi death camp, Netanyahu delivered a major address warning the world of new genocidal threats against the Jewish people and the importance of acting early enough to prevent such threats from coming to pass. 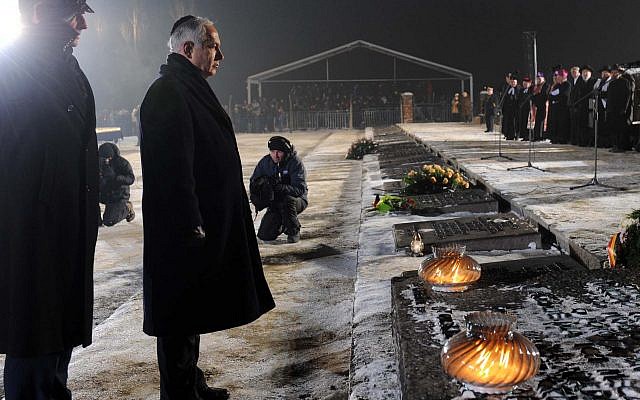 He also declared to the people of Europe and the world that the prophecies of Ezekiel 37 have been fulfilled.

It was an extraordinary moment.

Rarely has any world leader given a major address on an international stage declaring that End Times prophecies from the Bible have come true.

But that is exactly what Netanyahu did.

“The most important lesson of the Holocaust is that a murderous evil must be stopped early, when it is still in its infancy and before it can carry out its designs,” Netanyahu said. “The enlightened nations of the world must learn this lesson. We, the Jewish nation, who lost a third of our people on Europe’s blood-soaked soil, have learned that the only guarantee for defending our people is a strong State of Israel and the army of Israel. We have learned to warn the nations of the world of impending danger but at the same time to prepare to defend ourselves. As the head of the Jewish state, I pledge to you today:  We will never again permit evil to snuff out the life of our people and the life of our own country….”

After the Holocaust, he continued, “the Jewish people rose from ashes and destruction, from a terrible pain that can never be healed. Armed with the Jewish spirit, the justice of man, and the vision of the prophets, we sprouted new branches and grew deep roots. Dry bones became covered with flesh, a spirit filled them, and they lived and stood on their own feet.”

“As Ezekiel prophesied: ‘Then He said unto me: These bones are the whole House of Israel. They say, ‘Our bones are dried up, our hope is gone; we are doomed.’ Prophesy, therefore, and say to them: Thus said the Lord God: I am going to open your graves and lift you out of your graves, O My people, and bring you to the land of Israel.’”

“I stand here today on the ground where so many of my people perished – and I am not alone,” Netanyahu declared. “The State of Israel and all the Jewish people stand with me.  We bow our heads to honor your memory and lift our heads as we raise our flag – a flag of blue and white with a Star of David in its center. And everyone sees.  And everyone hears. And everyone knows – that our hope is not lost.”

We have an expression in Hebrew, “Kol HaKavod.”

It means, “All respect.”

You say it to a family member or friend that does something really important, courageous, or impressive.

Let me say it now to both President Herzog, and to former Prime Minister Netanyahu.

Kol HaKavod to you both.

Most Evangelicals agree with you that the rebirth of Israel in 1948 was not simply the result of much hard work and sacrifice by Zionist pioneers and the ragtag and undertrained and undersupplied Haganah and Palmach army, though they certainly deserve enormous respect and praise.

Mr. Herzog and Mr. Netanyahu, you are right: The rebirth of the modern State of Israel was a miracle of God.

The fulfillment – or at least the beginning of the fulfilment – of ancient Biblical prophecies.

God is at work in this Land, and among this people.

Not enough Israeli leaders say it.

But you both have and you deserve credit for doing so.

May your tribe increase.