Israeli Defense Minister Benny Gantz showed a map revealing 10 weapons-manufacturing facilities in Syria used to create precision missiles for Iran and other militias thus entrenching itself in the region.

“These sites, particularly the underground facility at Masyaf, host significant threats to the region and to the State of Israel,” Gantz said. “Masyaf, specifically, is used to produce advanced missiles.”

Gantz said the Iranians are currently building missile and weapon industries in Lebanon and Yemen as well. 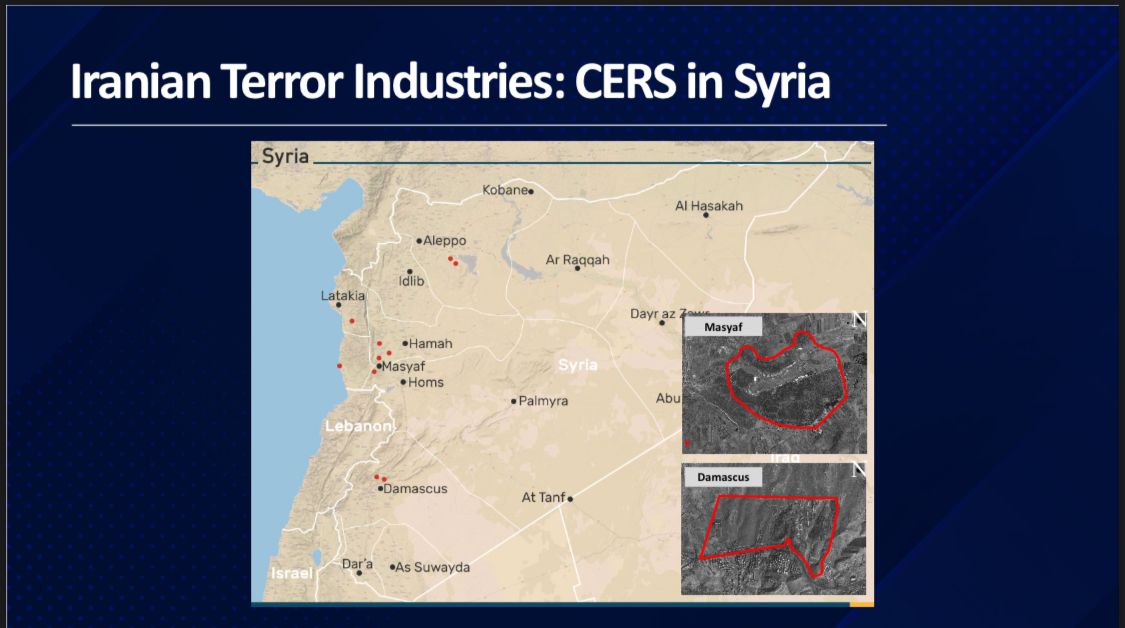 Here are his remarks in full as provided by the Government Press Office:

In today’s globalized world, every shift has multiplying effects.

When we see that the war in Ukraine (which we hope will come to an end soon) – threatens global energy prices, food resources and cost of living – we conclude that security and stability in the Middle East are more critical than ever – yet they are not guaranteed.

As you can see, our region is divided by an axis.

It reflects the geographic split between areas of radicalism and progress.

It also reflects the symbolic split between the trend of peace, which we celebrate this

week, as we mark 2 years into the Abraham Accords – versus the trend of

Taking cue from Robert Frost, today we face “two roads, not diverged in a yellow wood”, but rather, in the sand dunes of the Middle East.

Today, we stand at a crossroads that will determine where the region is headed a decade from now, in 2032.

The first scenario I will paint is unfortunately alarming.

In this case, Iran succeeds to tear apart the Middle East in a calculated and bloody manner, with three practical steps.

First, Iran systematically bases itself in the region via proxies – providing them with personnel, advanced weapons and military know-how.

Since the start of 2022, we have seen a sharp increase in Iran’s violent activities, with attacks employing advanced weapons such as UAVs and surface-to-surface missiles, against civilian and economic targets in the region.

Today, Iran provides more than 1 billion USD per year to its proxies in Lebanon, Yemen, Iraq and Gaza.

The lifting of sanctions against Iran will release more than 100 billion USD to the regime – and without a doubt this would double or even triple its terror budgets.

Lastly, Iran bases itself in the region by building massive terror industries.

Today, I can show you how Iran has achieved this in Syria.

This- is the “CERS” infrastructure in Syria – a network of production sites spread across the country, intended to serve Syrian military needs.

Under the vision of Qassem Soleimani, Iran transformed CERS into production facilities for mid and long-range, precise missiles and weapons, provided to Hezbollah and Iranian proxies.

In other words, it became yet another Iranian front – a factory for advanced, strategic weapons.

These sites, particularly the underground facility at Masyaf, host significant threats to the region and to the State of Israel.

In addition to CERS, the Iranians are currently working to build missile and weapon industries in Lebanon and Yemen.

If this trend will not be stopped, within a decade, there will be advanced Iranian industries across the region, producing weapons and spreading terror.

The picture only darkens if Iran will be allowed to gain a nuclear umbrella.

Our intelligence confirms international reports about Iran’s steady progress – including both its production capabilities and rate of enrichment.

Iran is producing more and more advanced centrifuges – including at underground facilities where activities are prohibited.

If Iran will not be required to destroy any centrifuges at all, they will be readily available for enrichment.

Even if an agreement will be reached, Iran will be prepared to restart protected enrichment in short time frames.

Not only has Iran accumulated capabilities and infrastructure, but also knowledge that cannot be reversed.

According to our assessments, should Iran decide to do so, it can reach 3SQ (or enough fissile material for a nuclear weapon) at 90% within a matter of weeks.

To the world, Iran’s nuclear canopy will shield its attacks and export of terrorism.

To the region, it will facilitate Iran’s hegemonic ambitions, while sparking a nuclear arms race.

And to Israel, it will pose an existential threat, which we will never accept.

This plot line must be stopped.

There is an alternative scenario – a road that leads to a different Middle East in 2032.

To address Iranian aggression, we must expand cooperation with regional partners. First we must strengthen industrial and economic ties, followed by diplomatic, intelligence and military cooperation under the CENTCOM umbrella.

Secondly, in facing Iran’s nuclear ambitions, we cannot settle for a superficial agreement. We must insist on regional and global security.

And regardless of a diplomatic solution – we must ensure credible military deterrence.

In any future scenario – we must also build a robust intelligence coalition among partners.

Lastly – the “Open Files”- a buzzword that is thrown around – must be addressed. The “Open Files” are in fact three undeclared sites in Iran: Tehran, Marivan, and Turquz-Abad, where nuclear material was identified by the IAEA.

Iran refuses to cooperate with international investigations – and it’s because they have something to hide.

We deserve answers and Iran should be held accountable.

I welcome the statements by U.S. and European leaders regarding their commitment to ensuring the authority and professional independence of the IAEA.

The second scenario that I raised, is a matter of choice and action – a matter of ensuring the security of the Middle East.

Because only security can lead to stability.

Only security and stability can lead to economic prosperity, and these are the conditions to promote social progress.

This Middle East is not split by a radical axis.

Instead, it’s a map connected by hundreds of synapses – a new regional architecture built on economic, cultural, scientific, and security cooperation.

It’s the picture of Emirati and Ba hraini investors sitting with Israeli innovators in Tel Aviv.

It’s the picture of Moroccan and Israeli paratroopers standing shoulder to shoulder.

It’s the picture of an Israeli aircraft flying through Saudi Arabian airspace.

It’s new signatures scribbled on the Abraham Accords – countries that our parents and grandparents could never have dreamed of.

It’s a new regional architecture that also includes the Palestinians.

And if I dare to dream bigger than our ancestors – it’s the image of an Israeli and Bahraini child cheering the “Formula 1” in Manama or eating watermelon together at an Ashdod beach.

And a reality in which the Iranian regime pours funds into the prosperity of its people, and not the nuclear program.

Unlike Frost, we know the consequences of the road not taken – and it is a dark vision in 2032.

The alternative, a more secure and stable Middle East, requires us to fight radical trends and support pragmatic, moderate voices.

It requires us to put an end to Iran’s attempt at sabotaging our shared future.

Because at the end of the day it truly is a shared future.

For the region and the world. Thank you.