JERUSALEM—Last month, ALL ISRAEL NEWS published the results of an exclusive poll which found that 68% of Americans believe if the Iranian regime builds nuclear weapons, they will use them to annihilate Israel and bring about a “Second Holocaust.”

Among Evangelical Christians in the U.S., the number rises to 77%.

What’s more, the poll showed that many Americans – but especially Evangelicals – are deeply skeptical that a new nuclear deal with Tehran will actually make the world safer.

Some 55% of Evangelicals “believe that the new Iran nuclear deal will make the world more dangerous by lifting economic sanctions, giving Iran’s government enormous new oil revenues, and making it easier for Iran to fund – and hide – its efforts to build nuclear weapons.”

In that context, I was grateful that Israeli Defense Minister Benny Gantz was willing to brief our “Abraham Accords Delegation of Evangelical Business & Media Leaders.”

And that he was willing to do so on Holocaust Remembrance Day, of all days.

Especially since this was the first time that Gantz has met with a group of Evangelicals since becoming defense minister. 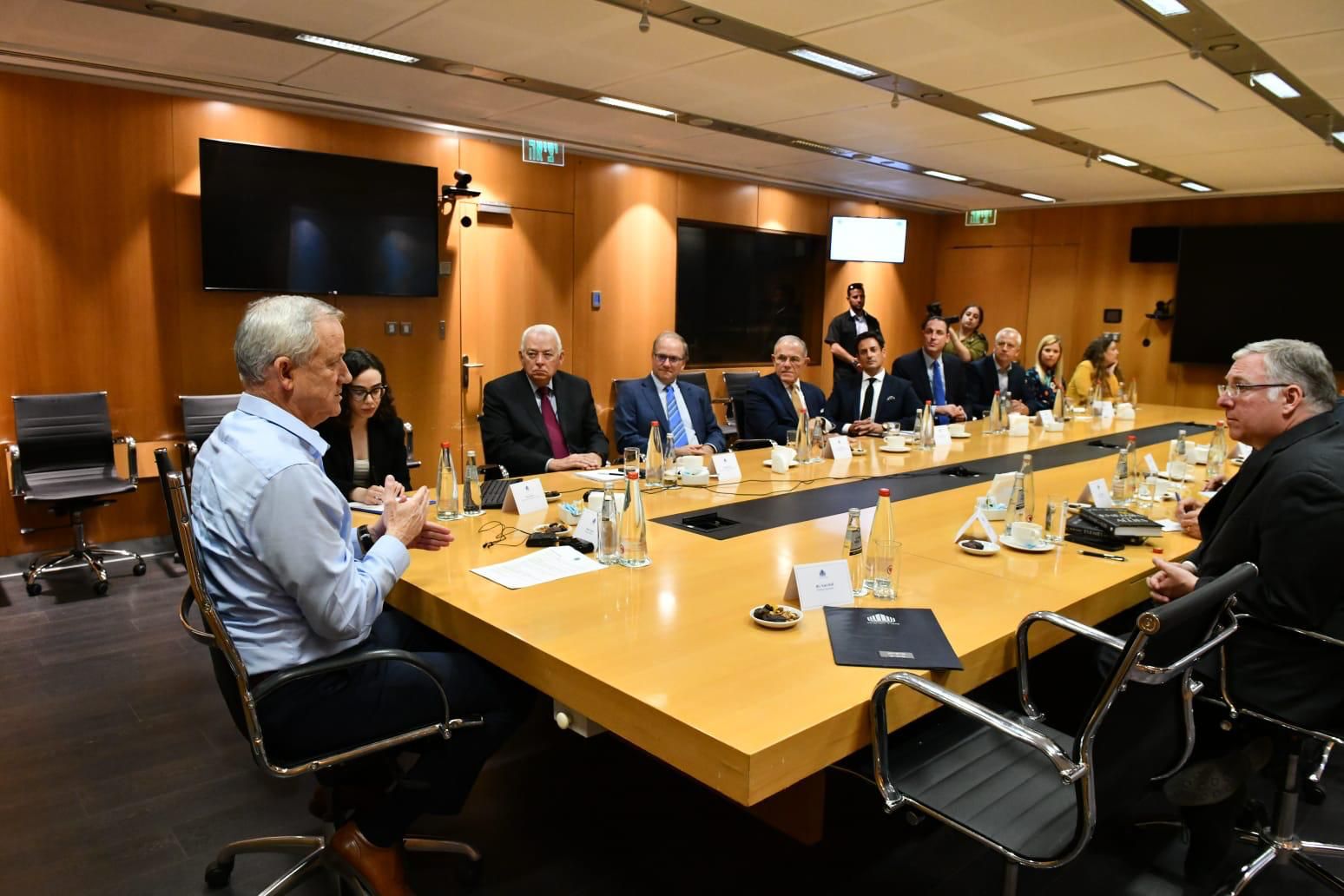 Last Thursday evening, our delegation arrived at the Kirya in Tel Aviv, Israel’s version of the Pentagon.

We met in the defense minister’s private conference room.

“Thank you very much,” he began. “This meeting reflects the unique and I would say unbreakable bond between the United States and Israel. It also reflects the powerful ties between Israel and the Christian Evangelical community. We are thankful for your true friendship and your ongoing support for the security and prosperity of the region.”

“Israel Holocaust Remembrance Day is coming to a close, but we must carry the memory of the Holocaust with us. Every day – as a son of Holocaust survivors, and as Israel's minister of defense – I know that ‘never again’ means that we must always ensure that Israel is the strongest country in the region and always prepared to defend itself. Israel needs to be strong, both militarily speaking, and of course, we must maintain our moral ground at the highest possible place.”

“At the same time,” Gantz continued, “I know that our strength enables us to pursue peace. And on this occasion, I would like to say a word about the important ties we have to build. Since the historic Abraham Accords, a new friendship with the United Arab Emirates and Bahrain and Morocco contribute to the prosperity of the Middle East.”

“As well, cooperation is critical to ensuring peace and stability in the face of common threats, particularly Iran's ambitions for regional and perhaps even global hegemony. These come in two forms. The nuclear program on the one hand, and Iran's regional aggression on the other. And its aggression is being conducted on land, sea, air and in the cyber domain, as well. We are building an important cooperation mechanism together with our regional partners, and I believe that together the sky is the limit. Thank you very much. Thank you.” 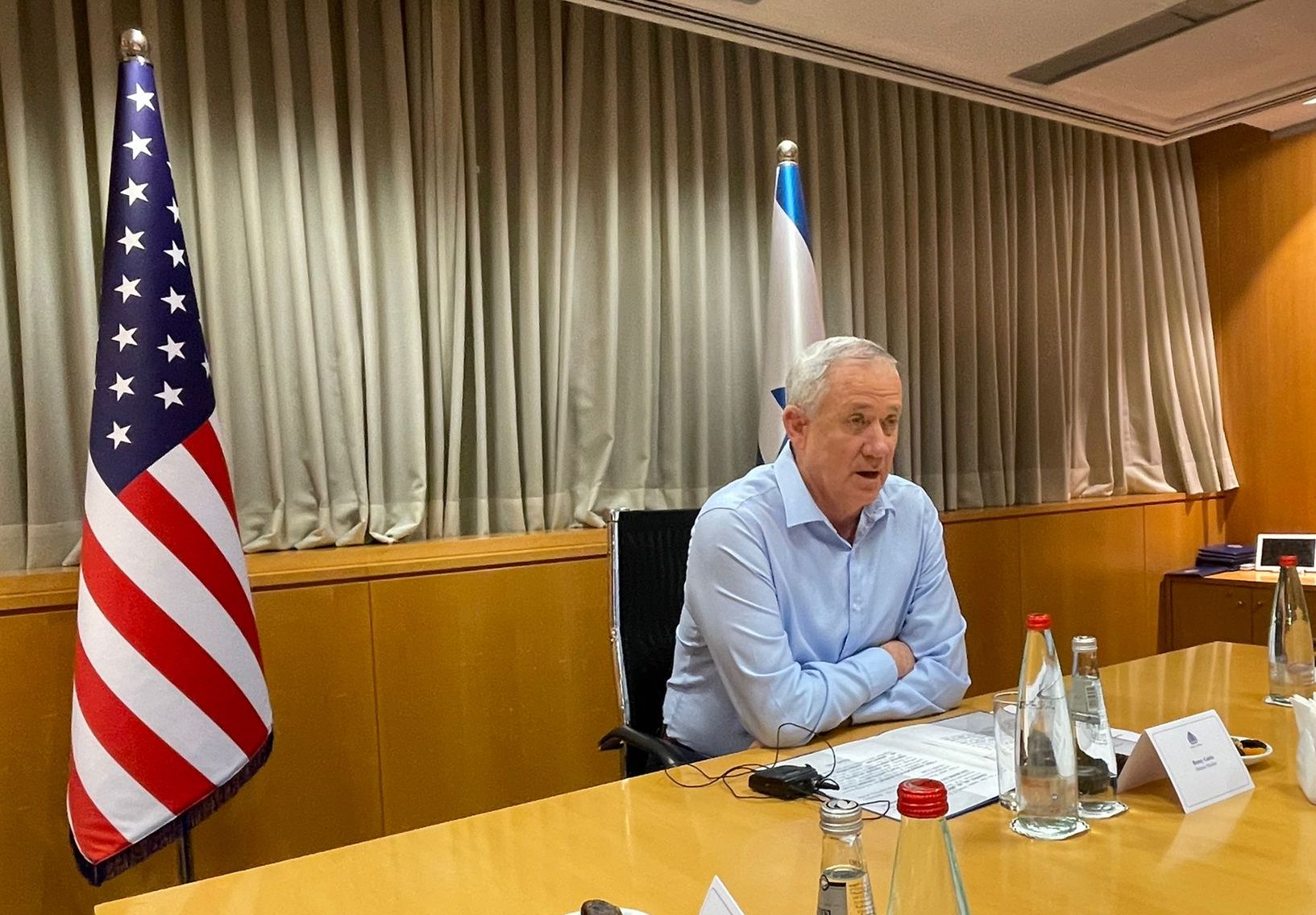 WHAT GANTZ REALLY BELIEVES ABOUT THE IRAN THREAT

For more than an hour, we asked Gantz about the Iran nuclear threat, the negotiations with Tehran that are ongoing in Vienna and the threat posed to Israel by Iranian proxies in Lebanon, Syria and Gaza.

We also asked him about the importance of the Abraham Accords and his efforts to improve daily life for the Palestinians, including his decision to meet twice with Palestinian Authority President Mahmoud Abbas – once in Gantz’s own home – something few other senior Israeli leaders have done.

The discussion was candid and fascinating, but it was all off-the-record. So, I’m not at liberty to share his comments with you.

That said, I did meet with and interview Gantz on-the-record for my recent non-fiction book, “Enemies and Allies: An Unforgettable Journey inside the Fast-Moving & Immensely Turbulent Modern Middle East.”

(As I’ve done with all the leaders we met with in Bahrain, the UAE and Israel, I gave Gantz a copy of the book.)

Let me share some excerpts so you’ll have a better understanding of what Gantz truly believes about the Iran threat.

It quickly became clear to me that he regarded the apocalyptic Iranian regime—and its growing alliance with Russia, Turkey, North Korea and China—as the number one threat facing Israel for the foreseeable future.

And he was worried that the U.S. might rush into another flawed and dangerous nuclear deal with Iran.

He was not, however, happy with IDF Chief of Staff Aviv Kochavi for getting into a public spat with the new administration over how to deal with Tehran, believing such discussions are best held behind closed doors. So, I pressed him to explain how he sees the regime in Tehran and how he hopes Washington will, as well.

“While I’m very respectful of the Iranian culture and the Iranian people, I’m very much worried about the Iranian regime,” Gantz told me, referring specifically to their determination to build, buy, or steal fully operational nuclear warheads. “But it’s not only the nuclear aspect; it’s also the launcher capabilities, the missile capabilities, the regional aggression—that we see them [supporting] different militias in Iraq and Syria, supporting the Houthis in Yemen. It all comes from this octopus—the Iranian octopus, I would say—which sends out its arms [in many directions].”

“When the supreme leader says he wants to annihilate the State of Israel, or when Mahmoud Ahmadinejad used to say, ‘We’re going to wipe Israel off the map,’ and the supreme leader didn’t oppose that—even seemed to support it—do you think he really means that?” I asked Gantz.

I also asked, “Does the ayatollah want to bring about a second Holocaust, or is that just rhetoric, in your view?”

“I cannot allow myself to think it’s just rhetoric,” Gantz, the son of a Holocaust survivor, told me. “He [the supreme leader] said it, and he’s trying to build measures to be able to do it.” 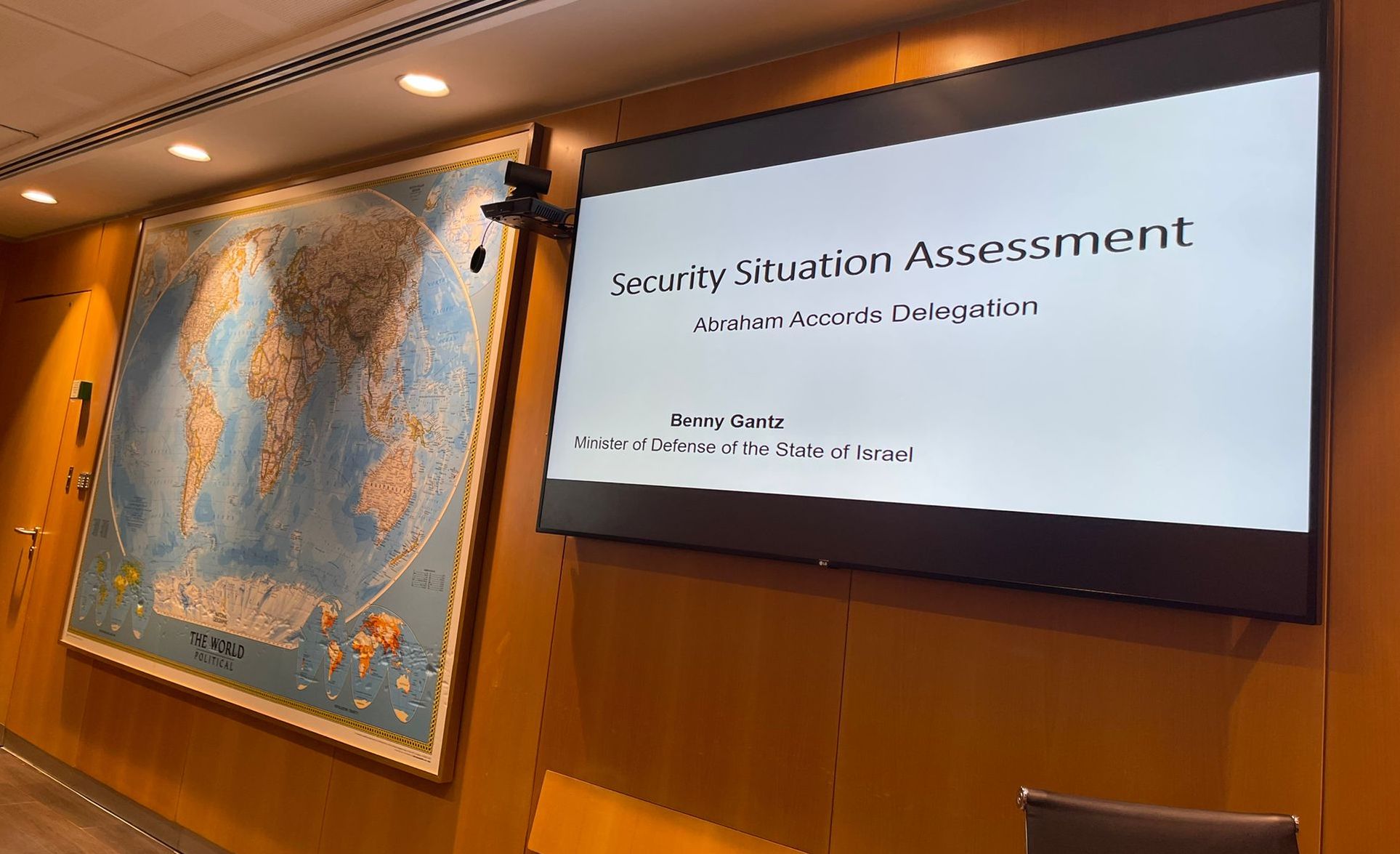 “So, if Tehran ever gets to the point of having nuclear weapons, there is really no margin for error, is there?” I asked.

“That’s right,” Gantz said. “Therefore, we are adamant about it.”

He then raised his concerns about the end-times theology of Iran’s supreme leader and his inner circle and how those beliefs might affect Tehran’s first-strike doctrine.

“I cannot ignore that there is the factor of religious belief or perspective,” he told me. “It’s very hard to measure it, but it would be wrong to assume it’s not there. So we will have to take our measures, our precautions, our capabilities, and make sure that we are not undefended under those circumstances.”

Gantz then showed me a map of the Middle East that he keeps on his desk. On it he has drawn a thick black line dividing the region into two parts.

To the north and east lie Russia, Turkey, Lebanon, Syria, Iraq, and Iran. These countries – nations that Israel needs to view as enemies or potential enemies – form a “radical axis,” he told me.

To the south and the west of the line lie Israel, Jordan, Egypt, Saudi Arabia, Bahrain, the United Arab Emirates and Qatar. These, he said, form the “camp of the moderates”—countries that Israel can view as allies or potential allies, all of whom are supported by the United States.

What worried Gantz most is that more and more countries are aligning themselves with the regime in Tehran, despite its continuing pursuit of nuclear weapons and long-range missiles, genocidal rhetoric, and apocalyptic religious doctrine.

“The [Iranian] regime is fundamentalist and radical,” Gantz told an Egyptian TV correspondent that same month. “[That’s why] Israel has a clear objective: that Iran not be nuclear. It is not just an Israeli interest. It is first and foremost a global and regional interest.”

If the U.S. and international community do not move quickly and decisively to intensify pressure on Tehran to give up its nuclear ambitions, might Israel have to take unilateral action?

“Yes,” Gantz said ominously. “The IDF and Israel’s defense establishment are holding on to the option of taking action against Iran’s nuclear project if that is what has to be done. I hope it doesn’t come to that.”