JERUSALEM—Last month, Jews in the U.S., Israel and around the world celebrated the biblical feast of Purim, remembering how in ancient times the God of Israel saved the Jewish people from imminent annihilation by a wicked Persian ruler.

Today, the results of a new poll reveal deep anxiety among both American Jews and Christians – and among all Americans – that the leaders of Iran, modern day Persia, are actively plotting a “Second Holocaust” to annihilate the Jewish people in Israel if Tehran can build, buy or steal nuclear weapons.

The poll also finds that most Americans, regardless of their religious backgrounds, are deeply skeptical that efforts of U.S. President Joe Biden and his team to negotiate a new nuclear deal with Iran will actually make the world safer.

Many fear that such a deal could actually make the situation worse, by removing economic sanctions on Tehran, thus flooding Iranian coffers with hundreds of billions of dollars in new oil money, some of which could be used to build nuclear weapons and arm terrorist proxy forces throughout the Middle East.

The poll was commissioned by The Joshua Fund, a non-profit Christian organization that my wife, Lynn, and I launched in 2006 to educate and mobilize Christians “to bless Israel and her neighbors in the name of Jesus,” according to the Abrahamic Covenant found in Genesis 12:1-3.

It was conducted by McLaughlin & Associates. This nationally known and widely respected polling firm has performed scientific opinion surveys over the years for corporations, non-profit organizations, Members of Congress, American presidents, and foreign leaders, including in the State of Israel. Taken between March 17 and 22, 2022, the poll asked questions of 1,000 Americans ages 18 and over. It has a 3.1% margin of error, plus or minus, at a 95% confidence interval.

Both The Joshua Fund and ALL ISRAEL NEWS are nonprofit and, thus, non-partisan organizations. The poll was not taken to lobby American or Israeli lawmakers – or any others – on political or public policy matters, but to better understand the views of the American people and how best to “pray for the peace of Jerusalem,” as believers are commanded in Psalm 122:6.

In the coming days, ALL ISRAEL NEWS will report on more aspects of the survey results.

Today, I want to focus on two key topics we explored.

The first question sought to measure American confidence in U.S. and international diplomatic efforts to prevent the Iranian regime from building nuclear weapons.

The second question sought to measure what Americans think the Iranian regime will do with nuclear weapons if diplomacy fails and Tehran acquires The Bomb.

WHAT DO AMERICANS BELIEVE ABOUT A POSSIBLE NEW IRAN NUCLEAR DEAL?

Here is the precise wording of the first of these two questions:

“Do you believe that the new nuclear deal that the international community is negotiating with the leaders of Iran will make the world safer, or more dangerous?”

Respondents were able to give one of three answers:

Though a new deal has not yet been finalized, the poll found that Americans are profoundly skeptical that diplomacy will stop the Iranian regime from building The Bomb.

In fact, a plurality believes that such a deal will make the situation more dangerous. 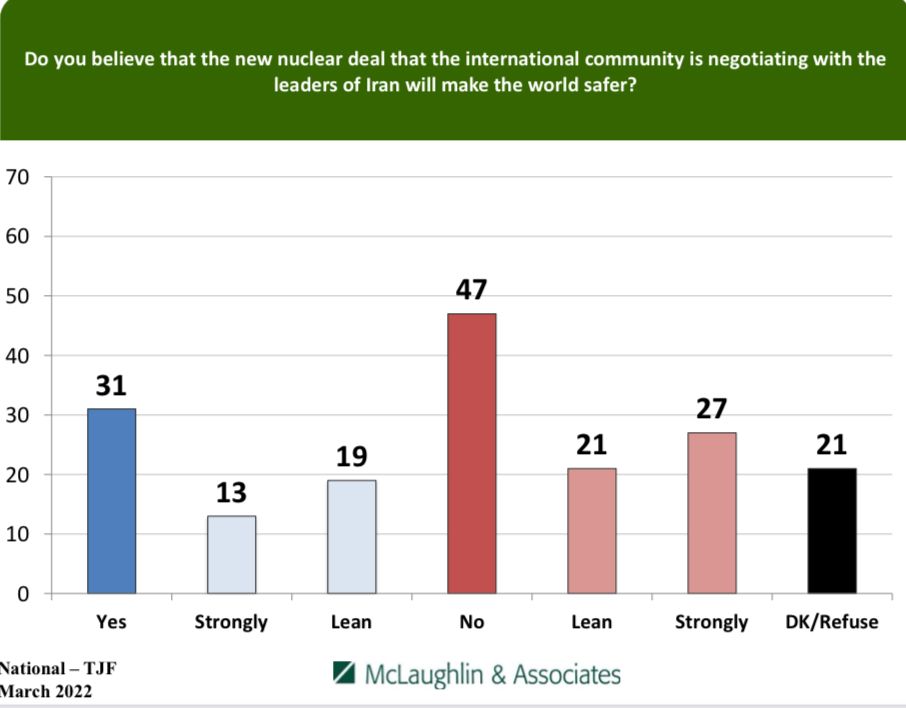 Let’s dive deeper into the data, looking specifically at those who believe that a new deal with Iran will make the world more dangerous.

DOES A NUCLEAR WEAPONS-ARMED IRAN POSE A SERIOUS THREAT TO ISRAEL?

We wanted to measure what Americans think the Iranian regime will do with nuclear weapons if diplomacy fails and Tehran acquires The Bomb.

“If the Iranian regime is ever able to build an arsenal of fully operational nuclear weapons, do you believe such weapons will pose a threat to the 6 million Jews who live in Israel?”

Respondents were able to give one of three answers:

The results were clear: Americans overwhelmingly fear that the Iranian regime seeks to destroy Israel and bring about a Second Holocaust. 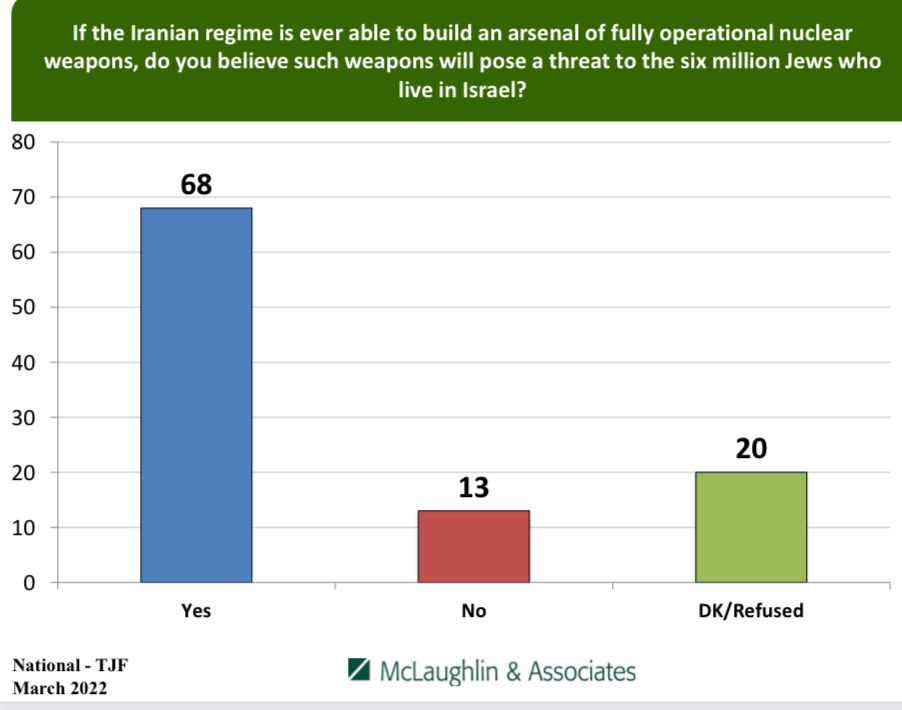 We found widespread agreement across religions, races, regions, and other categories that Iran is an existential threat to the State of Israel.

Some 77% of Evangelical Christians also believe this.

Let’s take a deeper look at the data regarding those Americans who believe Tehran is intent on Israel's destruction.