The exposure comes roughly two weeks after the collapse of the ground below an UNRWA school in Gaza that was caused by the illegal construction of a Hamas terrorist tunnel.

“Hamas is only interested in its own terrorist agenda, and students in Gaza constantly find themselves in danger from being used as human shields,” the IDF said in a statement.

The IDF named three schools with rocket launch sites adjacent to them: Mo'ath Bin Jabal School in the Shejaiya neighborhood of Gaza City, and Khalil Al Nobani School and Al-Furqan Elementary School – both located in the Zeitoun neighborhood. 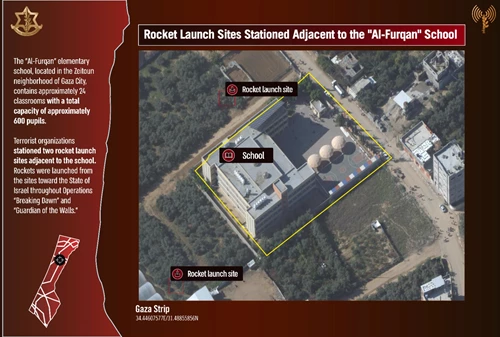 (Photo courtesy of the IDF)

Near the [Mo'ath Bin Jabal] school, which is used by UNRWA as a shelter during emergencies, is a Hamas rocket launch site,” the IDF said. “ Prior to Operation Guardian of the Walls, the school’s principal, Mehammed Abu Oun, maintained contact with an operative in the Hamas rocket array, Jalal Abu Aoun, who it appears enabled this shooting.”

The IDF said that rockets were launched at Israel from sites near the Al-Furqan school during Operation Guardians of the Wall and Operation Breaking Dawn.

More than 1,000 students attend these schools, according to the IDF.

“The cynical exploitation of schools proves once again that the terrorist organization consciously chooses to endanger Gazan civilians and use them as 'human shields' in benefit of their terrorist agendas,” the organization concluded. 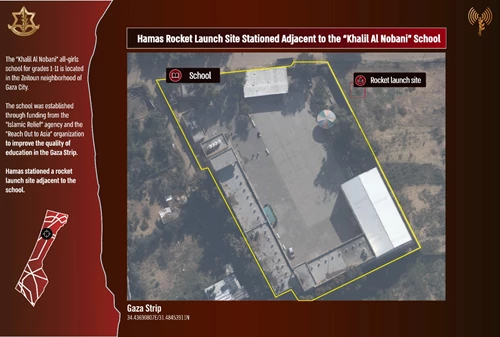