Israeli authorities closed all beaches after a colossal oil spill in the Mediterranean Sea polluted most of the country’s coastline - 105 miles of it - on Sunday and continued washing onto shore today, exposing Israel’s structural unpreparedness to prevent such environmental disasters.

Some believe that it could take years to repair the significant damage caused to Israel’s coastline and reopen the nation's beaches.

Turtles covered in black tar have already become the symbol of this unfolding environmental tragedy with the contamination affecting more than 80% of Israel’s Mediterranean coast, some 105 miles out of a total nearly 120 miles. To make things worse, the large majority of Israel’s population lives along the country’s narrow and fragile coastline.

Environmental experts have already declared the spill Israel’s worst contamination in its history. While nobody knows how long the recovery will take, experts fear that the oil spill has already wiped out much of Israel’s maritime life. On Sunday, officials said that Israel’s coastal desalination plants, which provide some 75% of the country’s drinking water, had not been affected by the contamination.

The source of the contamination is currently being investigated and was placed under a seven-day gag order by an Israeli judge. Following the current oil spill, Israel’s Ministry of Environment Protection stated that it would seek crucial funding that was already pledged 12 years ago, but the Finance Ministry has yet to release money for the clean up.

In June 2008, a cabinet decision under former Prime Minister Ehud Olmert ordered that the Environmental Protection Ministry should be fully staffed and equipped to prevent oil contamination at sea. However, the current environmental catastrophe reveals that in practice, Israel is not better prepared and funded for preventing civilian disasters in 2021 than it was in 2008.

While Israel’s military is known worldwide for its professionalism and preemptive operations to mitigate security threats on numerous fronts, professional long-term planning and proper funding has shown itself to be lacking in other government agencies. Lack of funding for the sufficient number of firefighting aircraft, for example, led to the extensive Carmel forest fire in 2010, which claimed the lives of 44 Israelis and destroyed some 12,000 acres (50 square kilometers) of unique woodland. Only after the disaster happened, did Israel’s government decide to fund a new firefighting squadron. 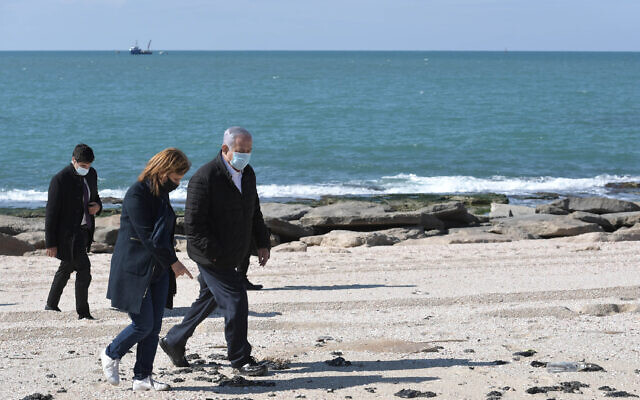 “I think that if several countries band together, within a few years we can bring about a great change, so that the sea, country, and beaches will be clean,” he said.

Israel’s coastline constitutes one of the country’s main tourism attractions. The current environmental crisis with polluted and unserviceable beaches therefore also risks further undermining Israel’s ailing tourism industry. This spill comes after a monthlong lockdown, which kept Israelis within a permitter of their homes, was just lifted two weeks ago enabling citizens to freely head to the beach.

Israeli Environmental Protection Minister Gila Gamliel expressed hope that the coastal cleanup will finish in time for the scheduled beach season opening in May. However, nobody knows how long it will take to properly rehabilitate Israel’s Mediterranean coast.

Gamliel estimated that the beach cleanup would cost tens of millions of shekels, further straining Israel’s already pandemic-ailing economy. Gamliel also vowed to locate those responsible for the pollution and hold them financially responsible.