Israel Defense Forces reportedly deployed flocks of artificial-intelligence guided drones to spot and neutralize rocket launchers used by Hamas during the 11-day Gaza conflict in May.

It is believed to be the first time that artificial intelligence (AI) has been put into practice in a 21st century military conflict.

During the conflict, the Gaza-based terrorist organizations Hamas and Palestinian Islamic Jihad launched more than 4,300 rockets and mortar shells into the Jewish state, killing several Israelis and forcing hundreds of thousands of Israelis to bomb shelters for almost two weeks.

Since conventional methods of locating the launch sites were inadequate, the Israeli military started deploying its artificial intelligence drone capabilities in a bid to more efficiently locate and neutralize enemy rocket launchers that were hidden throughout the Gaza Strip.

The Israeli military deployed flocks of small quadcopter drones with each device monitoring a specific patch of territory within the Gaza Strip. When a drone detected a rocket launcher, armed aircraft were dispatched to neutralize the source of the enemy fire. 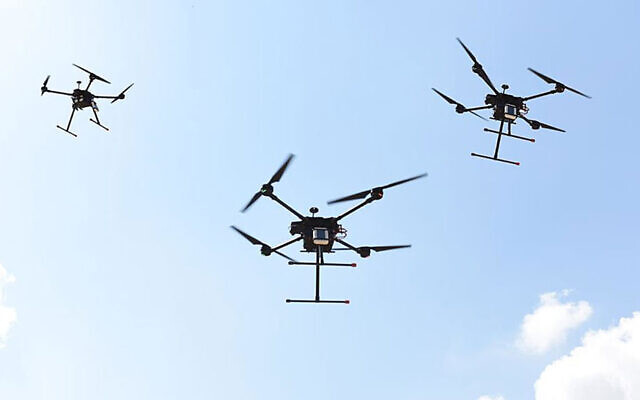 “After a year of preparation and exercises, the situation came and the aerial detection system is able to find the enemy and destroy it and bring the operational achievement we are looking for. We conducted more than 30 sorties with the drone swarms, which collected precise intelligence and assisted other drones to carry out attacks on the targets,” the Israeli company commander for AI operations Major “Mem,” told the Israeli news outlet, Walla.

Mem (the Hebrew equivalent of the letter M), whose name cannot be revealed for security reasons, also stressed that the use of artificial intelligence in the Gaza conflict was a dress rehearsal for a future potential war with Hezbollah in Lebanon, which is a far more powerful foe than Hamas.

“We’re not resting on our laurels. We are already looking northward and preparing for operations in the next war,” said the IDF officer.

Despite its small size, Israel has played a disproportionately large role in the development of modern warfare and deployment of new military technologies. During the Cold War, the Arab-Israeli conflicts were used as testing grounds for Western and Soviet-made weapon systems.

While Israel used French - and later American - weaponry, it also developed its own advanced military industry. The Jewish state gradually started innovating to find answers to multiple security threats on several fronts. During the First Lebanon war in 1982, Israel became the first country to experiment with drone technology.

Drones were initially used for reconnaissance, but later more advanced drones were equipped with offensive military capabilities that complemented the conventional capabilities of the Israeli Air Force.

Today, America and Israel are considered world leaders in drone technology. Drone technology is a mixed blessing. On one hand, it offers cost-efficient solutions for Western forces such as the IDF and U.S. military. On the other hand, the relatively inexpensive drone technology also makes it more accessible to foes such as Iran and even non-state terrorist organizations like Hezbollah and Hamas.