JERUSALEM – When my family and I made Aliyah in August 2014, we arrived amidst one of the worst rocket wars in Israel’s modern history.

Over the course of seven weeks, Palestinian terrorists in Gaza fired 4,564 rockets at Israel.

That was an average of 93 rockets a day.

Compare that with the past 36 hours.

More than 1,000 rockets have been fired at Israel.

That is an average of 28 rockets every hour. 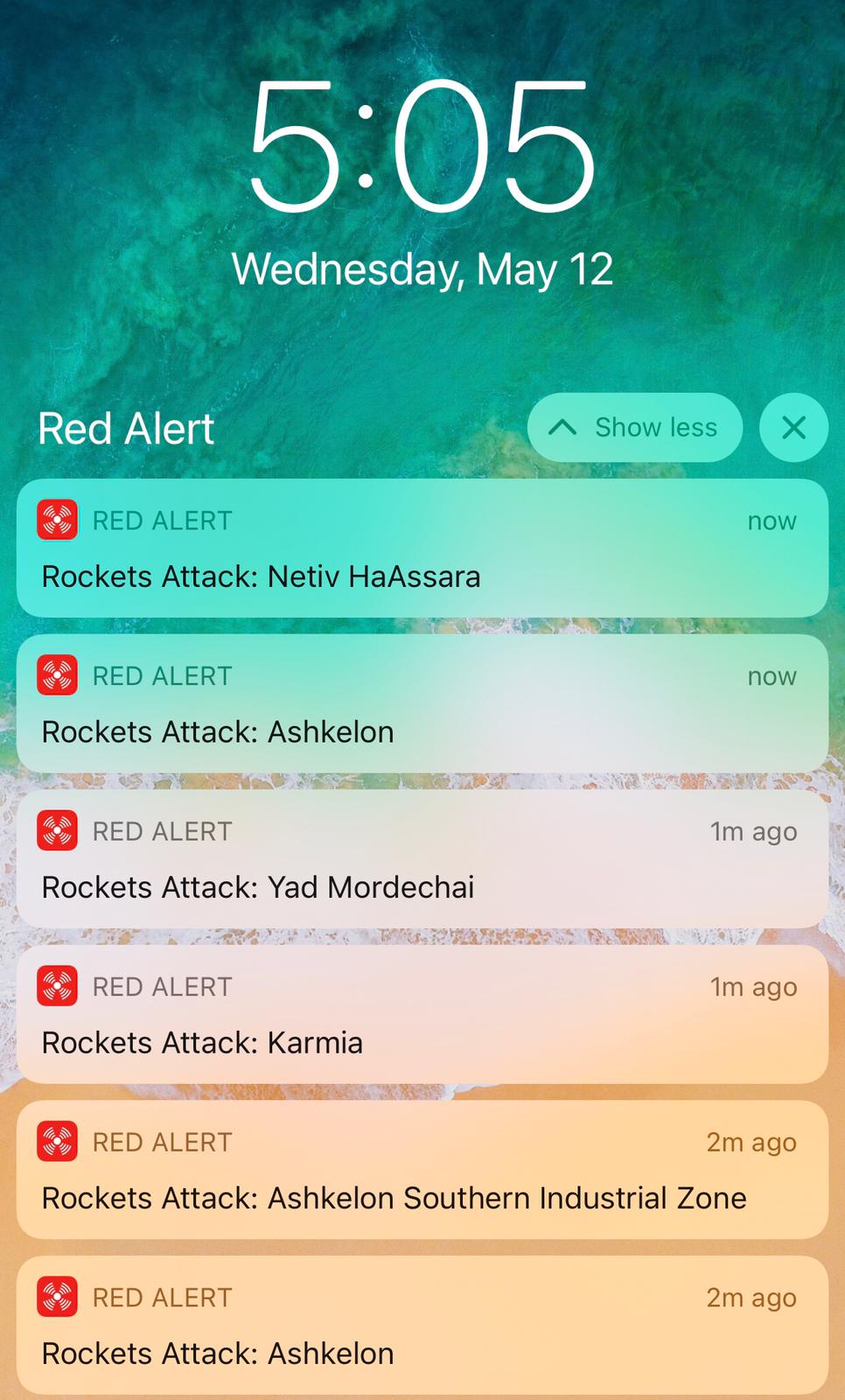 If this pace keeps up for the rest of the day, Israel will have absorbed in two days 25 percent of all the rockets the Jewish state absorbed in 2014.

Yes, the Iron Dome is shooting many of them down -- but they just keep coming with seemingly no end in sight.

For better or worse, Israelis have become used to an occasional spate of attacks from Gaza. It’s bad. It’s frustrating. The IDF retaliates. Then it’s over.

But a psychological shift occurred Tuesday night throughout the country.

People began to realize that this rocket war is different – worse – than what we have experienced in the past.

And Israeli leaders began preparing the nation and their military forces for the hard truth that a ground war in Gaza may be necessary, warning citizens that the campaign to restore calm and quiet will be difficult and will not be finished quickly.

Throughout the night, Merkava battle tanks have been transported to bases near the Gaza border.

Combat units are being mobilized and moved towards the theater.

The Times of Israel, citing IDF sources, reports that “3,000 reservists have been called up to various units in the military, notably the Southern Command and Home Front Command, and reinforcements were sent to the Gaza Division from the Golani Infantry Brigade and 7th Armored Brigade. He said an additional Iron Dome missile defense battery has also been deployed in southern Israel.”

No one in Israel wants to invade Gaza.

It would involve intense and house-to-house urban warfare and could lead to high Israeli casualties with no clear exit strategy or definition of success.

The last thing Israel wants to do is re-occupy the Gaza Strip which it evacuated and handed over to full Palestinian control in 2005.

Yet more than 500 IDF airstrikes against Hamas and Islamic Jihad targets in Gaza have not slowed the relentless, almost non-stop rocket attacks.

“We don’t want to enter Gaza, but if we have to, we will,” a combat soldier told the Jerusalem Post. 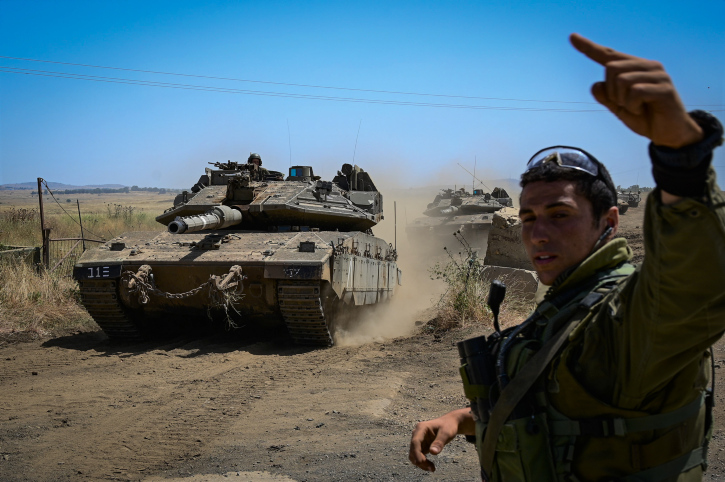 At least five Israeli civilians have been killed and more than 200 wounded in the relentless, almost non-stop rocket attacks.

In Tel Aviv, an elderly man in his 80s died of a massive heart attack running to a bomb shelter.

Millions of Israelis spent a second night in bomb shelters or basements to protect themselves from the attacks.

When air raid sirens go off, people have only 15 seconds or 30 seconds notice in many areas to get to their shelters before the rockets hit.

The stress of living with constant sirens and the constant booms of exploding rockets is taking its toll, especially on children.

All schools in the southern region of Israel near Gaza are closed. Many schools in Tel Aviv have decided to close today, as well.

This is completely unacceptable.

“We say to the leaders of the world that there is no sovereign state that would accept the firing of rockets against its civilians and we will not accept it,” Defense Minister Benny Gantz said Tuesday night.

In Gaza, meanwhile, some 30 Palestinians have been reported killed, and 203 wounded, according to the New York Times, citing local health officials.

This, too, is tragic.

Palestinians in Gaza are being held hostage by the Hamas terror regime that uses them as human shields and is creating hellish conditions no man, woman, or child should have to endure.

Please pray – and mobilize others to pray – for restored calm and quiet to both sides of the border.
Pray, too, for the people of Gaza and the people of Israel to be liberated soon from this wicked and bloodthirsty terror force.

But they have not ended – or even slowed – the steady barrage of rocket launches.

On Tuesday, the IDF destroyed a nine-story building in Gaza that intelligence officials say served as the Hamas headquarters.

“On Tuesday, the IDF killed two top Islamic Jihad terrorists, striking a blow to the terror group’s rocket infrastructure,” the Post noted. “The IDF also eliminated the head of the Hamas anti-tank missile unit Tuesday evening in an airstrike.”

“One of the terrorists was identified as Samah Abed al-Mamlouk,” the report stated. “The IDF and Shin Bet (Israel Security Agency) said that Mamlouk…was in charge of Islamic Jihad’s rocket arsenal. In another strike, Hassan Abu al-Ata, deputy commander of Islamic Jihad’s Gaza Brigade, was also killed.”

Prime Minister Benjamin Netanyahu spoke to the nation late Tuesday night in a brief live televised address, preparing the nation for a longer and more intensive campaign against the terror forces in Gaza.

“Yesterday and today, the IDF attacked hundreds of Hamas and Islamic Jihad terrorist targets in the Gaza Strip,” Netanyahu said. “We have eliminated dozens of terrorists, including senior commanders. We have bombed Hamas command centers and toppled buildings that serve the terrorist organizations. We will continue to attack with all force.”

“We have just finished a consultation and assessment of the situation with the heads of the security establishment and we made decisions,” Netanyahu continued. “Hamas and Islamic Jihad have paid and – I tell you here – will pay a very heavy price for their aggression.”

“I say here this evening – their blood is on their heads.”

“Citizens of Israel, we stand united against a reprehensible enemy. We all grieve for those who have been killed. We all pray for the wellbeing of the wounded. We all stand behind the IDF and the security forces.”

“I ask everyone, without exception, to strictly follow the directives of IDF Home Front Command and enter protected spaces, this saves lives.”

“I tell you something else this evening – this campaign will take time. With determination, unity and strength, we will restore security to the citizens of Israel.”

UPDATED at 9:27 AM Israel time