JERUSALEM—Asa Hutchinson is bullish on the future of Israel’s high-tech economy and tourism industry.

He is urging all Americans – and especially Christians – to start making plans to visit Israel soon.

But he is also increasingly concerned about the Biden administration’s talk of opening an American consulate for Palestinians in Jerusalem, when U.S. law states that Jerusalem is the capital of the State of Israel.

He is also concerned about President Joe Biden’s push to negotiate a new nuclear deal with the Iranian regime, and the prospect of the White House lifting economic sanctions on the terrorist tyrants in Tehran.

Yesterday, I sat down at the David Citadel Hotel for an exclusive interview with Hutchinson, the two-term governor of Arkansas (recently reelected with 65% of the vote) who is also serving as the current chairman of the National Governors Association.

I asked him why he chose to come to Israel for a four-day visit, what his impressions are of Israel’s new government and the significant challenges they face, and what his message is to Americans wondering if it is safe to come back to the Holy Land.

He told me this is the first international trip he has made as governor since the beginning of the COVID pandemic.

But it’s not his first time to Israel.

It’s actually his fourth visit overall here since entering politics in the 1990s, first as a Member of Congress, then as head of the Drug Enforcement Administration and senior Homeland Security Official.

Today, Hutchinson will deliver a keynote address before some 5,000 attendees from 60 countries at Prime Minister Naftali Bennett’s “Smart Mobility Summit” held here in the Israeli capital.

Hutchinson came to tout the success of his state’s pilot program with Walmart to test the use of self-driving trucks and discuss the future – and potential enhanced safety – of autonomous vehicles. 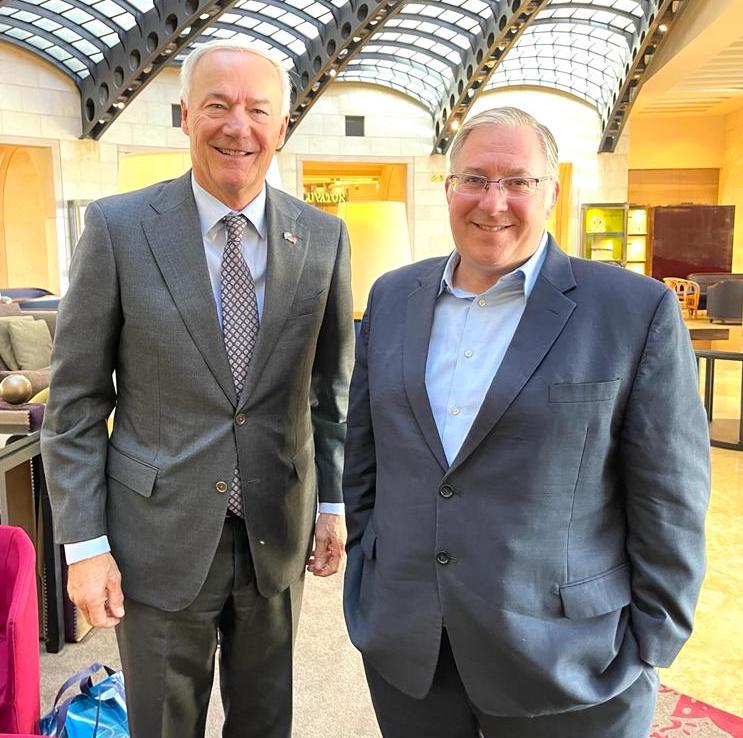 Here is a transcript of our conversation (lightly edited for clarity):

ROSENBERG: Governor Hutchinson, it’s great to be with you. Thank you for coming back to Israel. As I understand it, this is your second economic and trade delegation to Israel since you became governor. Is that right?

GOVERNOR ASA HUTCHINSON: That’s correct. It’s my second trip as governor. This is my first international trip, post-pandemic. I have been here twice before that, so it really makes my fourth trip – on previous occasions I came while I was in Congress and then when I was working for Homeland Security.

ROSENBERG: Why did you decide to come here to Israel as your first foreign trip coming out of the pandemic?

HUTCHINSON: I'm giving a keynote address at the Smart Mobility Summit hosted by the prime minister. And then secondly, I want to promote the relationship that we have between our defense industry in Arkansas and Israel. We’re part of the supply chain for the Iron Dome – we have a great partnership between Raytheon and Rafael here. So, we want to enhance that relationship as well. It’s one of our leading exports from Arkansas.

ROSENBERG: You’re back at a time when the region has changed significantly in recent years. The ISIS caliphate is gone. The Iraq war is mostly over. President Biden has surrendered to the Taliban in Afghanistan. And yet, on the positive side, we also have the Abraham Accords. I'm curious about your take on where things are and how you see the importance of U.S.-Israeli relations at this time of great change.

HUTCHINSON: Well, I think U.S.-Israeli relations are very positive, for several reasons. First of all, much of that is due to the Abraham Accords and the expansion of relationships here in the Middle East between Israel and their increasing number of allies and working partners. Secondly, the economy of Israel is good coming out of the pandemic, and the fact that you have more trading partners [with Gulf Arab countries] is always better, it improves the economy. And again, that’s part of the Abrahamic Accords. So, there's a real optimistic spirit here. And there is a coalition government that passed a budget. So, you know, it's probably more stability and hope for the future than you've seen in a while.

ROSENBERG: I think that's true. I say that as a dual U.S.-Israeli citizen that lives here. We haven't had a budget in three and a half years, so it's nice to have two state budgets [for 2021 and 2022] just passed in recent days.

That being said, there's a lot of concern right now about President Biden's announcement that he intends to reopen a Palestinian consulate here in the city of Jerusalem.

When President Trump in 2017 finally authorized the 1995 Jerusalem Embassy Act, he re-affirmed what Congress had put into law in 1995, that Jerusalem is the capital of Israel. And Trump did what Congress authorized – he put the U.S. embassy here in Jerusalem. Now it seems odd that to many – certainly to Evangelicals – that there would be the possibility of a Palestinian consulate opened here in Israel’s current and ancient capital, rather than in Ramallah, which is the operational capital of the Palestinian Authority.

I'm curious your take here. I'm not sure if you want to wade in, but it's a big discussion going on right now.

HUTCHINSON: The United States has recognized Jerusalem as the capital of Israel. That's the reason President Trump moved the embassy here to Jerusalem. So, it's contradictory to say, “Well, we're going to have a consulate for the Palestinian Authority here in Jerusalem.” So, there's contradictions there.

Joel, I want to be careful. I'm here in Israel, and I don't want to be critical on foreign soil of this [Biden] administration. But there are two things I have concerns about. One is the potential of that Palestinian consulate here in Jerusalem. And then, secondly, of course, is the Biden administration’s relationship with Iran and whether we will re-enter that international coalition with Iran and open the door for lifting economic sanctions on Iran. Those are problematic issues here and ones of concern to me as well.

ROSENBERG: I appreciate that very much. So, you got a chance to spend some time with our new President Isaac “Buji” Herzog and our fairly new Prime Minister Naftali Bennett. And I understand you’re coming straight from the Ministry of Foreign Affairs, where you met with our Foreign Minister and Alternate Prime Minister Yair Lapid. These men are navigating some real challenges. What's your impression of them? I'm guessing you had a relationship with Prime Minister Netanyahu over the years. But I’d be grateful for your thoughts on Israel’s new leaders.

HUTCHINSON: You're exactly right. When I was first here as a member of Congress in 1997, I met Prime Minister Netanyahu.

HUTCHINSON: Exactly, and I've continued relationship with him, and I know how much he's done for the State of Israel. But there is new leadership here, and you know, we'll leave Israeli politics to the Israelis.

ROSENBERG: Fair enough, but I think Americans are very curious about the changes going on inside Israel and who Israel’s new leaders. After all, most Americans have been so internally focused due to COVID and so many other domestic challenges. I'm not sure that most Americans have a sense yet of who Bennett and Lapid are, because so few American leaders have come here and taken their measure and reported back to the American people.

HUTCHINSON: Yes. Absolutely. Well, in terms of Prime Minister Bennett, he understands the American system. He's been in the private sector there. He's been very successful. I love his respect for Ronald Reagan's philosophy of deregulation and unleashing the private sector to grow the economy. Obviously, he understands the importance of a strong relationship with the U.S. on mutual security concerns. So, I see his leadership as very positive for America. Even though he has a coalition that is made up of a lot of different partners, I think that philosophically he has a good alignment there with the United States. So, I expect the relationship between Israel and the U.S. to continue in a very good, strong direction under Bennett’s leadership.

ROSENBERG: And your take on the foreign minister?

HUTCHINSON: Very gregarious. Former journalist. He is very optimistic about the future. He sees the threats. He's a realist. He's going to be a strong voice for Israel as he discusses security issues with the Biden administration. And given the fact that he will be a future prime minister here in Israel gives him significant clout to speak for Israel and express concerns about security and the direction that America takes.

I think both Lapid and Bennett will be strong advocates for increased awareness of the threat of Iran, as well as the possibility of Afghanistan – and even Pakistan – becoming concerns in terms of terrorism, with the threat of terror groups being resurrected in those areas.

ROSENBERG: I’m curious if you had any conversations with the Prime Minister or Foreign Minister or any of the other officials that you met with regarding tourism. Obviously, we've had a real painful season here in Israel, which has probably been the most locked-down country in the region, and that's been controversial in its own right. But we seem to be getting through the worst of the COVID pandemic. But now Israel is beginning to reopen.

What's your message? What are you hearing about the prospects for expanded tourism in Israel? Many Christians, in particular, are asking themselves, “Should I make my plans to make my lifelong dream of a trip to the Holy Land?”

HUTCHINSON: Coming to Israel ought to be on everybody’s schedule. We’re traveling here as we’re coming out of the pandemic, but we still had, you know, testing requirements to enter the country. As time goes on, I expect those requirements to be relaxed even more. So, the answer is: You can come now. You can come more easily a month from now. But Americans should know: Israel is open and they certainly are welcoming tourists again and I expect this international travel, both Israel and other places to increase.

Tourism is so important here, and so important to Israel’s economy. But the economy is strong here and growing again. Most of my conversations have been about advanced mobility, about technology exchanges and technology development. And that's really the strength of the Israeli economic growth. So, even though they're a little down in tourism, they're very optimistic about the other segments of their economy.

ROSENBERG: That’s good to hear. And what’s the main point that you're making at the Smart Mobility Summit?

HUTCHINSON: I’ll be making a significant announcement about autonomous vehicles in Arkansas and the success of a pilot program we’ve been running in our state. When people look at Arkansas, they might not think of advanced mobility and autonomous vehicles. But we've really opened it up – in 2019, we allowed these pilot projects, and they've been going on for 18 months. And I intend to talk about the success of those. And I think Israelis will be very interested in the connection of Arkansas and great technology companies, whether it's retail sector or otherwise, and that we have a leadership role to play.

ROSENBERG: Great to see you again, Governor. Thank you for coming back to Israel. And we look forward to more Americans coming back to the Holy Land.