JERUSALEM—A group of Iranians is looking to Israel for help in bringing exposure to the plight of their fellow countrymen and in ending the pain and suffering of those still living under the tyrannical regime in Tehran.

Zohreh Mizrahi, an Iranian-American attorney who is leading a delegation of 11 Iranians to Israel, envisions Israelis and Iranians returning to their historic, biblical ties and the shared values of the people. That is why the senior partner at Manesh & Mizrahi in Los Angeles was eager to bring her second delegation, “Shoshana 2022, Mission to Israel,” to Israel as soon as COVID restrictions eased.

Mizrahi explained their agenda during an interview with ALL ISRAEL NEWS at the Mamilla Hotel in Jerusalem on Friday. During this trip, the group wants to emphasize the historic ties between the two ancient civilizations – Persia and Israel; expose the narco-terrorism of the Islamic Revolutionary Guard Corps that is financing terror organizations like Hamas and Hezbollah and their proxy wars; encourage the international media to report what is happening in Iran; and to help Iranians technologically when the Islamic Republic shuts off access to the internet – blocking communication.

And that is exactly what is happening right now amid widespread unrest. Recent demonstrations – which started because of a spiraling economic crisis – quickly took on an anti-regime tone and have spread to dozens of cities across the country. People are chanting “Death to Dictator,” “Death to (Ebrahim) Raisi,” the president.

But the demonstrations have drawn scant international media coverage.

“No one is paying attention to protests in Iran,” Mizrahi said. “These are unprecedented because they are asking Khamenei (the supreme leader) to abandon the leadership and get out of Iran and they are calling for his demise. This is happening on a daily basis.”

True to her word to stay in touch with the media, later that day Mizrahi forwarded us a video of someone burning Khamenei’s portrait in public – “unfathomable a few months ago,” she noted.

Mizrahi and her fellow delegation members believe the regime poses the biggest threat to its own people – a similar sentiment to Israeli leaders who have labeled the Islamic Republic as enemy No. 1 to the Jewish state as well.

The delegation members are “naturally opposed” to the Joint Comprehensive Plan of Action (JCPOA) – commonly known as the Iranian nuclear deal – “because it's not just detrimental to the United States, but it is detrimental to the people in Iran when they are going hungry and bread is being rationed,” Mizrahi explained. “They don’t need nuclear empowerment, they need bread.”

“We don’t want western governments to appease the regime in Iran. Don’t bring them to the negotiating table and treat them like a normal state – they are not,” Mizrahi said. “They are not even people of faith. They’re not even people of cloth. They are thugs. They are a group of mafia that are operating only for their own self-gain and self-interest.” 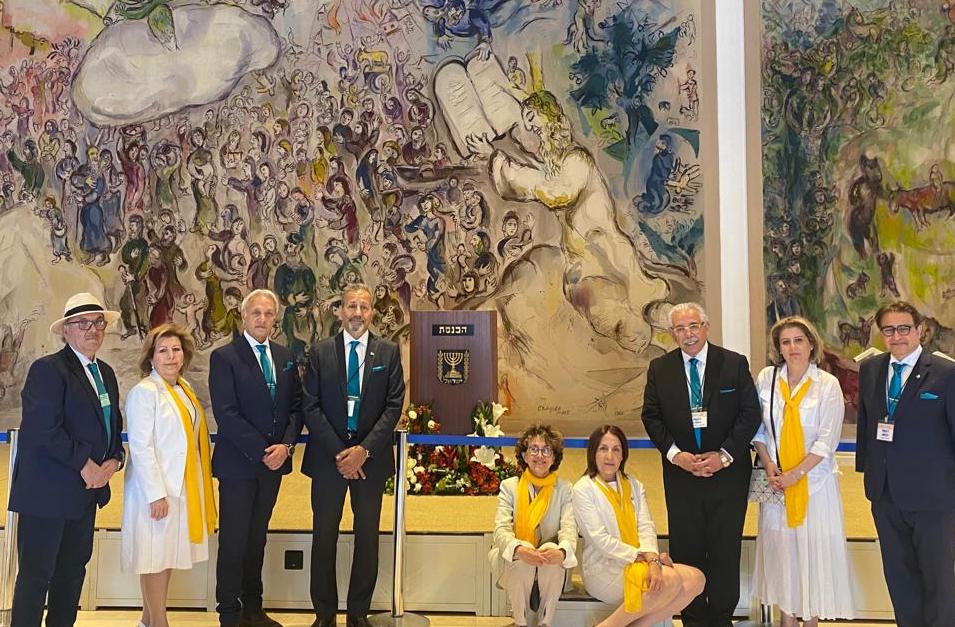 “Shoshana 2022, Mission to Israel,” a delegation of Iranians on a visit inside the Israeli Knesset in Jerusalem (Photo courtesy)

On this particular trip, Mizrahi wants to bring this multi-faceted awareness to Israeli leaders, institutions, media and NGOs through face-to-face meetings and academic conversations. The delegation is hosting a seminar with Ariel University in Judea and Samaria on leadership, politics and terrorism.

In just their first three days, the group had met with Knesset Member Yuli Edelstein, Government Press Office Director Nitzan Chen, the Ministry of Foreign Affairs and Ambassador (ret.) Yoram Ettinger among others.

It isn’t easy to recruit Iranians for such a mission as they are leery of being labeled a “Zionist” and endangering their family in Iran. But Mizrahi, who is Jewish, wanted to bridge the gap between Iranians and Israelis and she has found some other Iranians who were willing to take the same risk. The group is comprised of both Jewish and Muslim Iranians in the diaspora, many of whom were born in Iran and now live in either the United States or England. They are lawyers, journalists, national security experts, business men and women, politicians and activists.

Mizrahi led her first group in 2019. Another mission of Iranian-American activists which came to Israel in 2021 also captured media attention, thus spurring on Mizrahi’s next one.

According to their announcement, Shoshana 2022 is in Israel to “promote goodwill and partnership and explore areas of cooperation for the future – areas that might bridge the gap between people of Iran and Israel.”

Mizrahi insists that any regime change must come from the Iranian people, not an outside military. But, she said, Israel – with its similar cultural sensitivities and values of family, education, respect, traditions and preservation of history – is in a unique position to help the country rebuild should that every happen.

“No country like Israel has dealt with grief and trauma, scarcity, isolation, so we believe they will understand the Iranians,” she said.