As the Federal Reserve attempts to quash skyrocketing inflation in the United States by rapidly increasing interest rates, the U.S. dollar appreciated in 2022 by over 12% against the Israeli shekel. This presents investors in shekels, and supporters of Israel around the world, a unique opportunity.

In this article, we unpack why the U.S. dollar is currently strong and how that affects the Israeli shekel, and we examine whether the dollar will remain strong indefinitely. We will also compare the U.S. economy to Israel’s economy.

Recently, the Israeli shekel exchange rate traded at 3.5 shekels (NIS) for $1 U.S. dollar (USD), providing an unusual time window to buy more NIS with the same U.S. dollar. Over the past two decades, the Israel shekel has clearly been the stronger currency. In fact, prior to 2022, the NIS appreciated against the USD by 61%. This reflects the strength of the Israeli economy, the global influence of its innovations and its resilience during troubling economic times.

Yet, in 2022, we saw a short-term reversal of direction, albeit not a shift of the long-term trend of shekel strength.

Since 2010, our firm witnessed only four other times that this golden opportunity to profitably convert USD to NIS has occurred – when the USD temporarily peaked in strength. During the initial stage of the coronavirus pandemic, this window of opportunity existed for only one month. The U.S. dollar can buy more NIS today, but this peak may not remain for long. 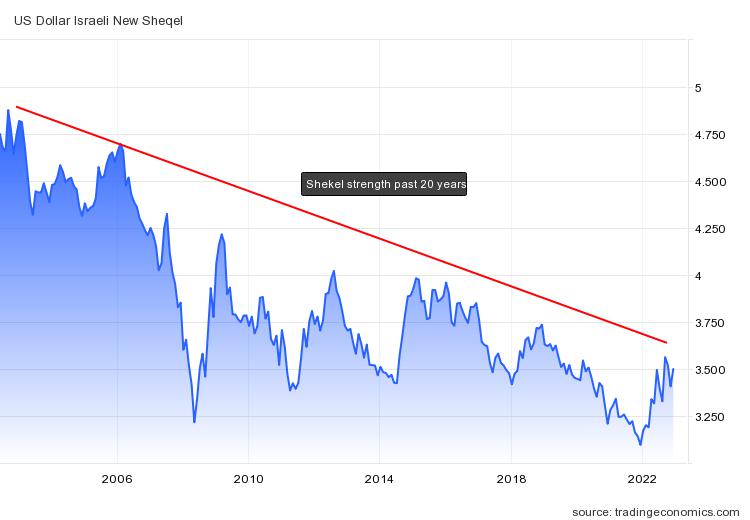 Why has the USD gained in strength?

During global crises – such as the Great Recession of 2008-2009, COVID-19 or the global inflation crisis we are experiencing today – the USD (and specifically U.S. government bonds) are perceived as a refuge from the storm.

This year’s crisis has been exacerbated by extensive money printing, supply chain disruptions, global conflicts and ongoing lockdowns in China. During such upheavals, financial institutions move their money to U.S. Treasury Bills as a “risk-off” maneuver.

Since the U.S. hiked its interest rate aggressively from near zero to 4.5% in less than a year, investors might achieve a higher interest rate on U.S. Treasury Bills – currently considered a safe investment.

The movement of capital, chasing higher interest rates in USD, has strengthened the U.S. currency and weakened many other currencies around the world, including the Israeli shekel. This is because, when global investors move money into USD assets, they sell their other currencies. Buying dollars pushes up the value of the USD, while selling other currencies weakens those currencies.

But, recall that while interest on U.S. CDs is higher than their counterparts around the world, those same U.S. dollars are eroding faster than the interest received on them.

Historically, why has the USD been a haven of value? The U.S. has had the world’s largest economy for over a century, and the USD is regarded as having the stability to weather global tempests.

The USD has been the world’s dominant reserve currency for seven decades. The U.S. dollar is the currency of choice for international trade, and major commodities such as oil are primarily bought and sold using U.S. dollars. According to the International Monetary Fund, central banks globally hold 60% of their foreign currency reserves in USD.

Will the USD always be regarded as the world’s “safe haven” currency?

The U.S. markets its debt abroad primarily. The USD has what some countries call “exorbitant privilege,” given its widespread usage, leading to lower financing costs and higher demand. But, in an article for the Brookings Institution, former Federal Reserve Chair Ben Bernanke indicated that the United States’ declining share of the global economy and the rise of other currencies, such as the euro and yen, have eroded the U.S. advantage.

While the bulk of international trade is done in USD, only two decades ago, the USD made up 71% of global foreign exchange reserves. The IMF observed that this low percentage represented a 25-year low for U.S. dollar reserves.

The IMF noted: “some analysts say this partly reflects the declining role of the U.S. dollar in the global economy, in the face of competition from other currencies used by central banks for international transactions. If the shifts in central bank reserves are large enough, they can affect currency and bond markets.”

The U.S. Government Congressional Research Service said in September that “some observers have speculated whether changes in the global economy, and geopolitical shifts more generally, could cause a shift from the dollar to other currencies. Focus in particular is centered on China’s economic rise, U.S. sanctions and digital currencies.”

Furthermore, the USD isn’t the strongest currency in the world. And, in the past decade, several larger economies – including of the BRICS nations and the European Union – and the IMF itself, have considered alternatives to the USD to be the next dominant global reserve currency. The BRICS countries – Brazil, Russia, India, China and South Africa – are working on establishing a new reserve currency based on their five currencies to better serve their economic interests.

Some view the economic sanctions imposed on Russia for invading Ukraine, and the disconnecting of Russia from the SWIFT international wire system, as the weaponization of the USD for political purposes.

The BRICS confederation has been collaborating to establish a joint payment network that would cut reliance on the Western financial system, and has increasingly used their local currencies for trade. De-dollarisation is already underway.

In fact, the Wall Street Journal reported that Saudi Arabia is in talks with China to price some of its oil sales in Chinese currency. China purchases more than 25% of the oil exports of Saudi Arabia. If these enormous transactions are not performed in USD, it would strengthen the Chinese yuan and weaken the standing of the USD.

Would the 13 OPEC member countries follow Saudi Arabia’s leadership into de-dollarisation? The agreement to recycle surplus “petrodollars” into the American economy via U.S. Treasury Bills and bonds – initiated in 1973 – might not continue forever.

Despite the U.S.’ large spending deficits, $31 trillion in national debt and unprecedented amount of USD printing, the USD retains (for now) its world reserve currency status, requiring considerable international trade to be denominated in USD. If (or when) this preferred status is meaningfully challenged or uprooted, the world might see a reset of the perceived strength of the almighty dollar. In general, when the dollar is weak in the world, the shekel is strong. 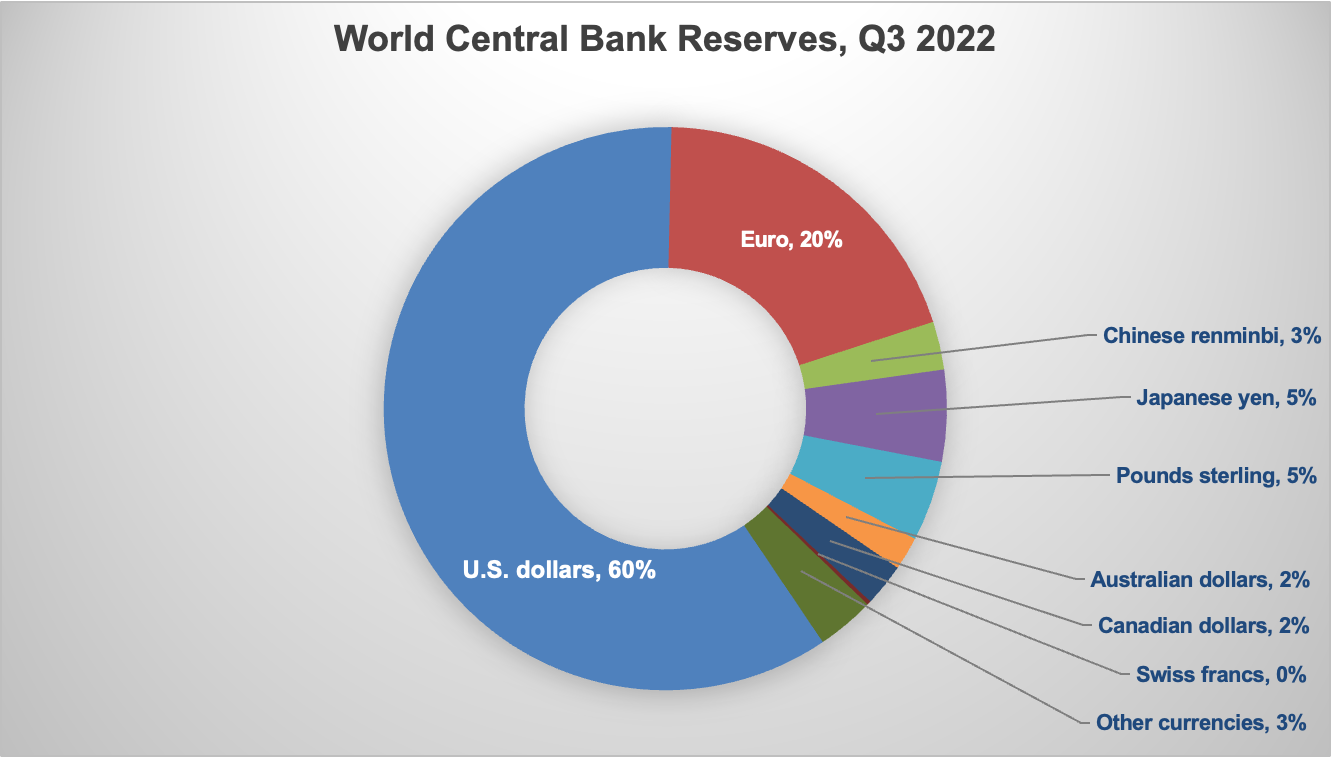 Most Americans (or Americans living abroad) are concerned about high U.S. inflation, growing energy costs, low U.S. GDP and the likelihood that the U.S. will enter (again) into recession in 2023. Their buying power in dollars has been eroding at an alarming rate: U.S. inflation ranged between 7.1% and 9.1% in 2022.

The U.S. GDP contracted for two of the first three quarters of 2022. The U.S. Conference Board forecasted that economic weakness in the U.S. will intensify, Real GDP growth in the U.S. would be only 1.9% this year and that there will be no growth in 2023. Most analysts, bankers and CEOs in the U.S. expect the United States’ economy to enter a recession in 2023.

Israel has an enviably low debt-to-GDP level. What’s more, Israel’s current account balance has experienced surplus over the past two decades, in fulfillment of Biblical prophecy to “lend to many nations and borrow from none.”

These factors, including Israel’s low unemployment rate and low debt per capita (41% of US), position Israel’s economy for a superior recovery in the medium-term.

How can I profit?

Additionally, because of Israel’s resilient economy and high GDP growth, the Tel Aviv Stock Exchange benchmark indexes performed much better than most Western stock markets in 2022.

According to Israeli officials that spoke with Israeli newspaper Haaretz, the Boycott, Divestment and Sanctions (BDS) movement scored another gain recently when Norway’s sovereign wealth fund, with assets totaling $1.3 trillion, announced it would review investments in firms tied to settlements beyond “the Green Line.”

So as Bible believers, how can we support the nation of Israel, its economy and its currency? By investing in Israel, and in shekels, investors from around the world can deal a direct blow to this anti-biblical movement.

In these days when Israel faces additional resistance from foreign governments for its stance against radical Islam and Iran’s nuclear ambitions, and with increasing immigration from around the world, Israel needs all the help it can get. In real terms, investing in Israel just got a lot cheaper. For those considering diversifying their currency holdings, now is the time. 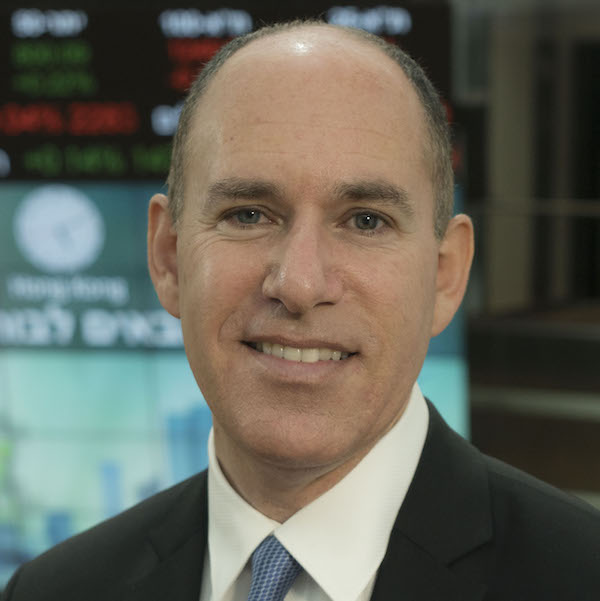 Evan Liberman is the CEO of Wise Money Israel – an Israeli wealth management, securities-licensed firm – staffed by Israeli investment professionals who are also believers in Jesus. The firm assists and encourages investors around the world to open investment accounts in Israel to gain exposure to Israel's growing economy, innovation, stock market and currency. Their tailored portfolios incorporate “Biblically Responsible” screening.