The National Rescue Unit of the Israel Defense Forces Home Front Command was honored by local officials and first responders during a ceremony to thank them for their help in trying to find survivors of the tragic 12-story building collapse in Miami last month.

Miami-Dade County Mayor Daniella Levine Cava, Surfside Mayor Charles Burkett and local fire and rescue chiefs applauded the Israel troops, some of whom departed for Israel on Saturday and some leaving Sunday.

On behalf of Miami-Dade County, thank you to the members of @IDF who traveled halfway across the world to stand shoulder to shoulder with our first responders, and who poured their hearts into the search.

We are forever grateful for your service to our community. pic.twitter.com/hlsuaLKRHO

The Israeli team, comprised of seven members who arrived three days after the June 24 disaster, brought with them advanced Israeli technological tools used at disaster sites which helped reduce the recovery process from months down to just days, according to the Israeli commander at the site.

“Everyone, including myself, estimated that it would take months to find the bodies. But now we’re talking about days,” Col. Golan Vach, commander of the IDF Home Front Command’s National Search and Rescue Unit, told The Media Line. 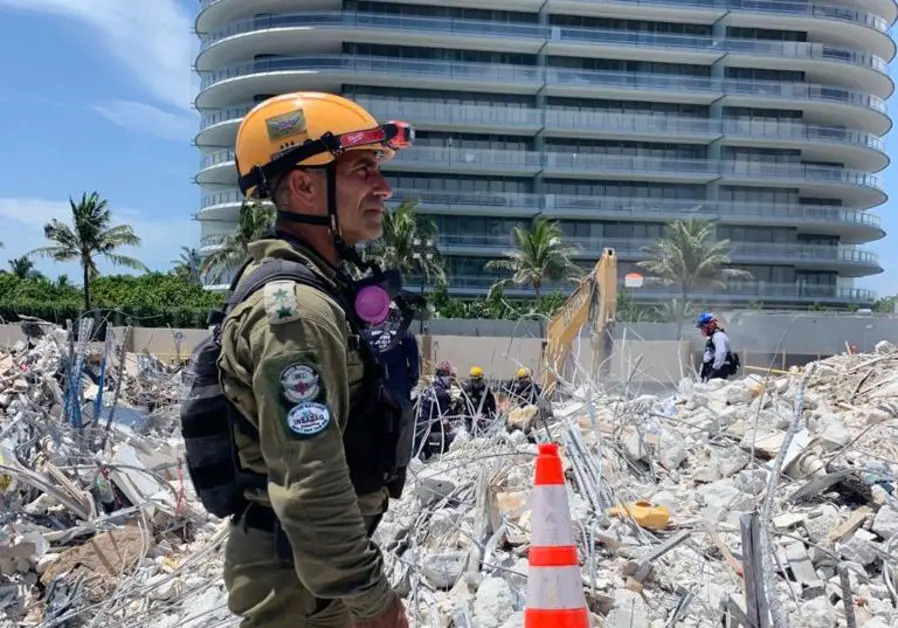 The IDF tweeted before the team left Israel: “The mission of the delegation is to assist in the life-saving efforts by mapping the challenges at the site of the destruction, assisting the Jewish community and supporting the local rescue forces.”

The Israelis came equipped with 3D mapping and a separate psychological unit helped family and community members process their grief.

Cava said on Saturday that 86 people have been confirmed killed and many of the dead and missing are part of Miami’s large Jewish community.

But it wouldn’t be an Israeli rescue mission if there wasn’t controversy. Rafael Shimunov, a political activist from New York, snidely said that the Israeli military is known for crushing people in buildings, not rescuing them in a reference to the bombardment of Gaza in the 11-day conflict in May which began with Hamas launching rockets at Israeli civilians.

“I really don’t understand the IDF’s involvement in rescue attempts of people tragically crushed under buildings in Miami. Their expertise is crushing buildings with people in them, not rescuing them, ” Shimunov wrote. “As if we don’t have any expertise or technology here in the U.S. Using these tragic deaths for pro-Israel propaganda is just quite something. These forces are literally stepping over buildings they crushed with children in them to go to Miami and do a PR stunt.”

But Emily Schrader, a Jerusalem Post columnist who is CEO of Social Lite Creative and a research fellow at the Tel Aviv Institute, noted in her own tweet the absurdity of the criticism:

“Imagine being such a small person you’re mad about people you don’t like saving lives. Linda Sarsour is mad the IDF is saving lives in #Miami. Remember that.”

“This horrific statement comes as families are mourning the loss of loved ones and hoping for miracles in the tragic building collapse that still has 113 missing in the rubble,” B’nai B’rith International wrote. “The tweet is not only deeply insensitive but anti-Zionist and anti-Semitic,” they continued. “A people that, sadly, has had to deal with bombs from Palestinian terrorists is now told it has the temerity to help people in Florida based on their own tragic experience.”