JERUSALEM—A few years ago – even mere months ago – few would have expected Israel to sign peace treaties with four Muslim nations which have redesigned the region creating new alliances in defense, commerce and tourism.

But the fact that the Abraham Accords have become a reality goes to show that God is doing a “new thing” in the region and in Israel, according to Jürgen Bühler, president of the International Christian Embassy Jerusalem.

During a speech at the Jerusalem Prayer Breakfast, Bühler challenged Evangelicals to embrace the new trends emerging in the region.

Even if that means accepting an Arab party in the upcoming coalition in the Israeli Knesset.

Bühler read from Isaiah 43:18-19, “Forget the former things; do not dwell on the past. See, I am doing a new thing! Now it springs up; do you not perceive it?”

“We are challenged with a God who is constantly doing new things. He likes to surprise us,” Bühler said.

“Who of us would have ever thought that Israel would have peace with any of the Arab nations and now four of them have lined up and more are to come,” Bühler said.

“I am critical of thinking of a Muslim party being in the coalition in Israel. At the same time, it shows us there is a new thing even happening here in Israel – and we might see a more peaceful region and a more peaceful Israel in the years to come.”

“I believe it is important for us even as Evangelicals, we might have to get rid of old stereotypes in the Middle East and embrace the new thing,” Bühler said. “We see Isaiah 19 in many ways unfolding before our eyes.” 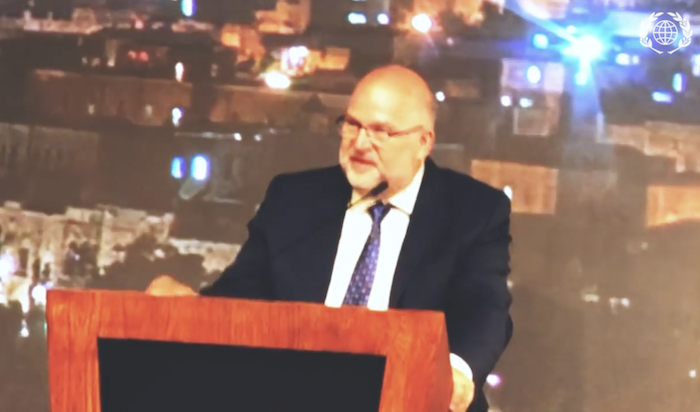 “This will be also a time of reckoning for the nations of the world. And that’s why this prayer breakfast is so absolutely essential,” he said. “We pray for all nations that they take the right decision to align themselves with God’s purposes for this world.”

Bühler also reassured Israeli leaders that support for the nation among Evangelicals is “growing dramatically and it will continue to grow.”