'I don't see any other way but to bomb Iran,' says former Israeli national security advisor
Search
November 20, 2022
Current top stories
commentary
Greed plus woke ideology caused FTX crash from $32 billion to $0
THE WEEK AHEAD: FIFA World Cup kicks off, the new Knesset aspires to limit the Israeli Supreme Court’s authority and the Bank of Israel readies another interest rate
What does the history of slavery have to do with today’s music? Everything, according to one Israeli fifth grade teacher
IDF soldier attacked by Israelis in 'shameful' incident
U.S. archivists find oldest-known star map beneath ancient Christian Syriac manuscript
guest column
Once a Jew, always a Jew!
Looking to shore up alliances against Iran, Azerbaijan to open an embassy in Israel
Iran blamed for bomb-carrying drone targeting Israeli-owned oil tanker off Oman
Ancient Christian monastery – most likely predating Islam – discovered in the United Arab Emirates
guest column
Christians and Jews unite to bless, comfort Holocaust survivors
Historic: Israeli President Isaac Herzog to make first state visit to Bahrain
Investigators find Iranian drones in Russia’s arsenal contain Israeli-made parts
Facing US pressure, Netanyahu reportedly tells Smotrich ‘no’ to Defense portfolio
Tourism in Israel shows strong recovery
Muslim identity supersedes statehood, Palestine imam says in al Aqsa sermon
Israeli fans warned to hide their identity at World Cup in Qatar
Romania issues legislation to protect Jewish ritual slaughter, kosher food
Israeli man with ‘completely reversed’ heart receives correction by cardiologists
Qatar’s treatment of foreign workers comes into focus as soccer World Cup kicks off
Next Israeli Cabinet likely to have just two women compared to nine ministers in previous one
Russia cautiously welcomes Netanyahu’s election victory
VIDEO: Major Leaguers visit Israel in effort to 'hit anti-Semitism out of the park'
As Israel's 25th Knesset sworn in, president urges legislators to be mindful of minorities, balance of power
FBI launches probe into death of Palestinian-American journalist Shireen Abu Akleh
WATCH TBN SPECIAL: What do U.S. midterm election results mean for Israel, the Iranian threat and the 2024 presidential race?
Turkey posts ambassador to Israel after four years
It's official: Netanyahu receives mandate to form a coalition – despite being on trial, president says
UN votes to seek International Court of Justice legal opinion about Israeli ‘occupation’
Six Germans drive 4,500 kilometers to deliver humanitarian gift to Israel
Holocaust survivors warn of rising anti-Semitism on 84th Kristallnacht anniversary
New coalition anxious to reform courts, make aliyah tougher
Holocaust survivor tells her story in Dubai, marking 84 years since Kristallnacht
ENEMIES AND ALLIES: IRAN THREAT
VIDEO: Joel Rosenberg's take on the complicated relationship between the Israelis and Bibi Netanyahu
Social media influencer to millions launches video project on ‘How To: Never Forget’ the Holocaust
ISRAELI ELECTIONS – ANALYSIS
WATCH TBN SPECIAL: How did Netanyahu engineer his historic victory? Can he make peace with Saudis? Will he attack Iran?
The Temple Mount is the place to watch as a new government takes shape
Saliva-based pregnancy test by Israeli startup available next year
TRUMP 2024: ‘This will not be my campaign. This will be our campaign all together’
Security forces in the Republic of Georgia foil Iranian attempt to assassinate an Israeli citizen
Iranian regime reportedly feels encircled by ‘Zionist threats’
Israeli pop star answers Kanye West with Jewish-inspired outfit at MTV music awards
guest opinion
Evangelicals should be the first to care about the environment
Trump needs to 'read the room' and 'exercise humility' if he wants his base to support him in 2024
Human rights NGO says Iran has killed more than 320 civilians, including 43 children, 25 women
guest column
Does small Israel have outsized solutions for global food shortages?
KitePride founders create opportunities, value for victims of sex-trafficking, prostitution
guest opinion
Why the Law of Return must not be changed
Israel, Jordan, UAE replace ‘intent’ with ‘commitment’ to solar energy, desalination exchange
guest column
Why Kanye’s anti-Semitism matters
guest opinion
Should Israel be participating in the world’s climate change agenda?
Tehran residents back Iranian minorities against regime violence, protests being named ‘full-fledged revolution’
The Joint Commission of the JCPOA wraps up a round of nuclear deal talks in Vienna, May 1, 2021 (Photo: Enrique Mora/Twitter)

SIMI VALLEY, CALIFORNIA—On Monday, a new round of high-stakes negotiations are set to commence in Vienna as the world urgently tries to persuade the Iranian government to curtail or scale back its nuclear program.

I’ll be discussing the growing Iranian crisis and what it means for the U.S. and the world when I speak at the Ronald Reagan Presidential Library here in Simi Valley on Tuesday about my new book, "Enemies and Allies: An Unforgettable Journey inside the Fast-Moving & Immensely Turbulent Modern Middle East."

But with tensions rising and the clock ticking, let me sketch out some of the situation right now.

WHAT DOES BIDEN WANT?

President Joe Biden wants Tehran to agree to re-enter some new version of the 2015 nuclear deal known as the Joint Comprehensive Plan of Action (JCPOA), the deal from which President Donald Trump withdrew in 2018 saying it was “flawed” and “dangerous.”

The problem is that senior Israeli officials – both current and former – are steadily losing confidence in Biden’s determination to truly stop Tehran from building The Bomb before it’s too late.

Many in Israel’s new government are looking at Biden’s surrender to the Taliban in Afghanistan, steadily plunging poll numbers in the U.S., and passionate belief in the effectiveness of the original JCPOA deal and concluding that Biden and his team are too desperate for a deal of almost any kind with Tehran.

They also believe that Biden has absolutely no stomach for taking U.S. military action to neutralize the Iranian nuclear threat, despite Washington’s perennial insistence that “all options are on the table.”

WARNING SIGNS OF A COMING WAR?

Thus, we are seeing a growing number of reports that Israel is preparing itself to strike Iran itself, if Israeli leaders conclude they have no other options and no more time.

“I DON’T SEE ANY OTHER WAY BUT TO BOMB”

Most current senior Israeli leaders in the position of actually authorizing such strikes are staying quiet.

But a growing number of senior and highly respected formal Israeli security and intelligence officials are talking openly.

Yossi Cohen, the former Mossad chief, said last week, that “independent strikes on nuclear sites, if Iran takes this path that endangers our existence, should and must be on the table – unequivocally.”

"Israel cannot live with a situation in which the Iranians are getting closer and closer to the bomb, and it will soon have to make a decision how to stop it," Amidror told the BBC last week.

"I don't see any other way but to bomb [Iran’s facilities], because I don't see the Iranians retreating from their dream of having a nuclear umbrella under which they can be even more aggressive than they are today,” he added. 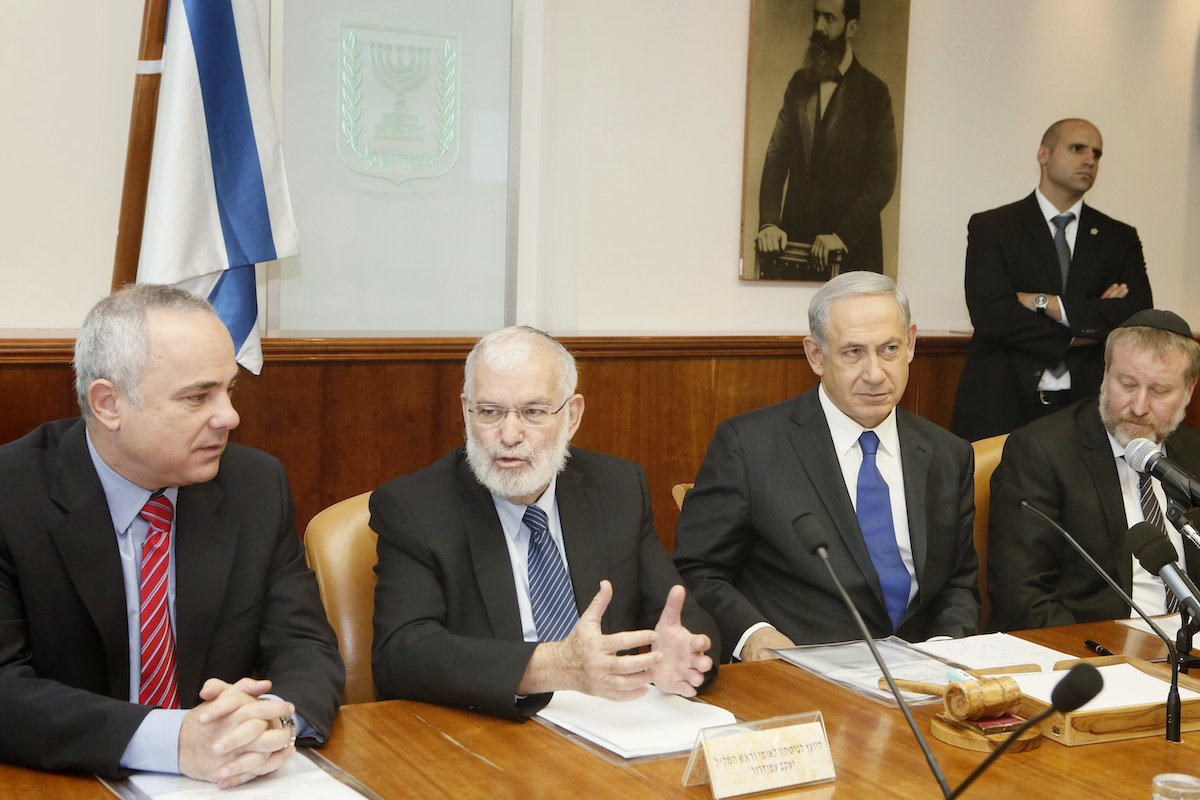 At a security conference in Herzliya last week, Amidror said bluntly and publicly what many senior Israeli officials are saying privately.

"The world won't lift a finger” to stop Iran from getting nuclear warheads, Amidror said. "The Americans won't carry out a single mission."

"To many Americans, Iran is not a problem," he noted. "The Americans regard human rights and the Palestinian issue far greater problems to deal with than the Iranian threat."

In Herzliya, Amidror repeated his main point that Israel must be prepared to destroy Iran's military nuclear facilities on its own, reported Israel Hayom.

“I hope it doesn't come to that, but unfortunately I believe in the end we will have no choice," he said. "The Americans do not want to act."

IS THERE ANY HOPE OF A DIPLOMATIC SOLUTION?

Obviously, the best-case scenario is that Biden and his team stand firm in Vienna, make no concessions – or very minor ones – and thus persuade the Iranians once and for all to shutter their nuclear program because the cost of U.S. economic sanctions are exacting too high a price on the Iranian people.

I am certainly praying for such an outcome, which is vastly preferable to a new regional war.

But, by all indications, the Iranians are digging in their heels and acting like they have no interest in a diplomatic deal.

There are two possible reasons.

First, Tehran really doesn’t want a deal, ever – they believe that they are so close to acquiring The Bomb – and so sure that Biden won’t authorize U.S. military strikes, or even let Israel strike – that they see no point in giving up their dream of thermonuclear capability now.

Two, Tehran desperately wants a deal as soon as possible but doesn’t want to look desperate – thus, by looking tough and seeming intractable, Tehran is testing to see how desperate Biden is for a deal, and feeling increasingly confident that the longer Tehran resists, the more major concessions Biden will make.

At this point, many Israeli officials share the assessment that Biden looks far too eager for a deal, and that a deeply flawed new agreement would be worse than the first one.

“What happened in 2018 [when Trump withdrew from the JCPOA] is that the Iranians advanced toward a bomb – they continued with their enrichment…to 60% [purity],” Amos Yadlin, former chief of IDF Military Intelligence from 2006 to 2010, said last week.

“They have today three tons of enriched uranium, and most dangerously, they developed advanced nuclear centrifuges,” Yadlin noted.

“Now, even if we return to the 2015 agreement, it’s not the same agreement,” he warned. “It doesn’t keep Iran a year away from a bomb [as it was before the JCPOA was signed], rather only two months from a bomb.”