JERUSALEM—Honduras became the fourth country to open an embassy in Jerusalem, a move the nation’s president hailed in a ceremony today as historic.

Honduras follows the United States, Guatemala and Kosovo – the first Muslim nation to open an embassy in Jerusalem.

Honduran President Juan Orlando Hernandez was accompanied by a delegation of politicians, Jewish representatives and 19 Evangelical Christian pastors who have been the driving force behind the opening of the embassy.

“Your arrival to dedicate the Honduran Embassy in Jerusalem, the reopening of the Israeli Embassy in Tegucigalpa and the cooperation agreement that we have just signed, are an additional indicator of the abiding friendship and deep link between the Jewish state, the State of Israel, and the people and nation of Honduras, under your leadership,” Bennett said. “Mr. President, you are a true friend of Israel. The Jewish people have a long memory and you will be inscribed on the pages of history as one who took a courageous and correct action for the State of Israel.” 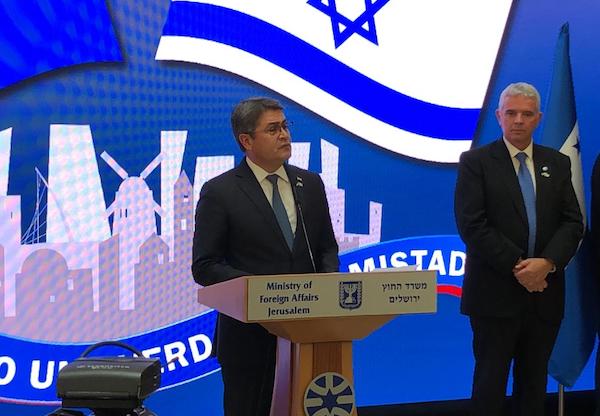 Hernandez, who spoke in Spanish, is finishing his term as president this year. He said he hopes his successor will maintain the embassy in Jerusalem. He also thanked the Christian community in Honduras for driving this decision.

“It was the effort of believers in Honduras that made this happen,” he said.

Bennett thanked the president for standing with Israel “even when that was not always popular and even when it occasionally exacted a price.”

“This attests to friendship – the willingness to take actions that entail paying a price. I would like to thank you and the Honduran public for this support,” he said.

Pastor Evelio Reyes, pastor of Iglesia Christian Vida Abundante, a congregation of 1,000 in Honduras’ capital, was part of a delegation of Evangelicals who came to Israel for the occasion.

“Christians recognize that Western civilization is based on three pillars: From the Greeks we received reason, from the Romans we got the law and from Jerusalem, we received the spiritual component,” Reyes told ALL ISRAEL NEWS.

“So we have an obligation, as Christians, because from Israel we received our faith,” he said. “The Bible teaches us of the fruit of standing with Israel and that is why we celebrate the courageous decision of our government to relocate the embassy from Tel Aviv to Jerusalem, the eternal and the undivided capital of Israel.”

The embassy is located in the Malcha neighborhood of western Jerusalem. 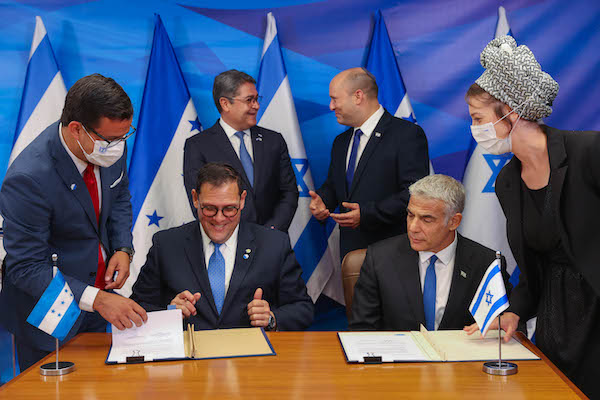 “We are so happy for the conviction and for the determination to strengthen the relationship between our two countries,” said Miguel Munoz, head of the Cooperation and Commercial Office at the Honduras Embassy. “Every day we bless Israel and we pray for Jerusalem and we can say that Honduras is blessed because of this.”

A member of the government's opposition, who is Jewish, travelled to Jerusalem for the event.

“We all worked for this moment,” Congress member Dennis Castro told us. “This is so special to me because we love Israel and the people.”

Castro said he hopes that Israel will support Honduras as well in tourism, agricultural and education.

“Our country needs help,” he said.