JERUSALEM – It is important for all people, especially for Christians, to realize that Gaza is mentioned frequently in the Bible, and that God loves the people of Gaza.

What’s more, it is vital for Christians who love and stand with Israel and her right to self-defense to also have compassion on the Palestinian people in Gaza who are suffering terribly because of Hamas and Islamic Jihad.

That was the message ALL ISRAEL NEWS Founder and Editor-in-Chief Joel C. Rosenberg delivered during an interview on the Fox News Channel on Saturday.

He noted that Gaza is mentioned 22 times in the Bible, from the book of Genesis through the book of Acts in the New Testament where the Philip the evangelist was sent by God to “the road to Gaza” to share the gospel of Jesus Christ.

Rosenberg, a dual U.S.-Israeli citizen who lives in Jerusalem, called on Christians to commit themselves to a worldwide movement of prayer for peace for people on both sides of the border – both Israelis and Palestinians – who are suffering from more than 2,000 rocket attacks in less than one week. 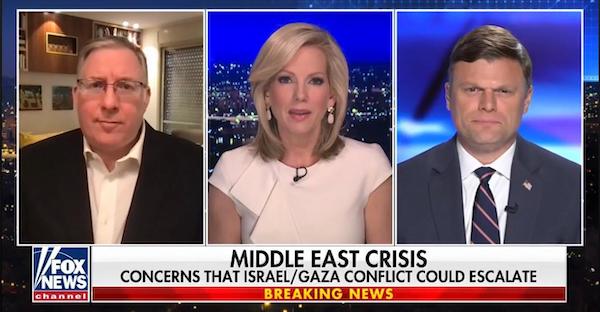 “Well, look, I'm glad that Bernie Sanders isn't the President of the United States,” Rosenberg replied, alluding to a New York Times op-ed written by Sanders placing the blame for the latest crisis on Israel’s “right-wing” and “racist” government.

“I say that as a Jewish person and also a follower of Jesus,” Rosenberg continued. “Bernie Sanders is Jewish, but he does not understand what's going on, that we are being attacked with 2,000 rockets and missiles from a terrorist regime. There is no moral equivalence.”

“I'm not satisfied with where President Biden is, but he has gotten better during the week,” Rosenberg noted. “And we have to remember that President Biden is the best in the entire Democratic Party when it comes to Israel.”

Here is the full transcript of the 7:50 minute interview.

SHANNON BREAM: So, let's talk about the latest developments in this deepening crisis in that region with the author of the new thriller, The Beirut Protocol, live on the ground from Israel tonight – ALL ISRAEL NEWS editor Joel Rosenberg – and former State Department Senior Adviser Christian Whiton. Great to have both of you back with us tonight.

CHRISTIAN WHITON: Good to be here.

BREAM: Thanks, Joel. You're there in the region. Can you give us a sense of what this week has been like? Does it seem to you that things are escalating, tapering off, stable? Where is it tonight?

ROSENBERG: I would describe in one word, “hellish.” If you're living anywhere near Gaza, in Israel – from southern tier communities right next to the Gaza border to Tel Aviv, any communities in central Israel, even to Jerusalem – you've been under relentless rocket attack. More than 2,000 rocket attacks in five days. Millions of Israelis are living in bomb shelters. And then look on the Palestinian side. Palestinians are held hostage. They're being held by a terrorist regime that is putting all these missiles and rocket sites next to schools, next to playgrounds, in hospitals, in mosques. And Israel is striking hard. They have to – we have to – protect ourselves. But it is a hellish situation. And I just ask for people all over the world, particularly Christians, to be praying for the peace of Jerusalem like never before. 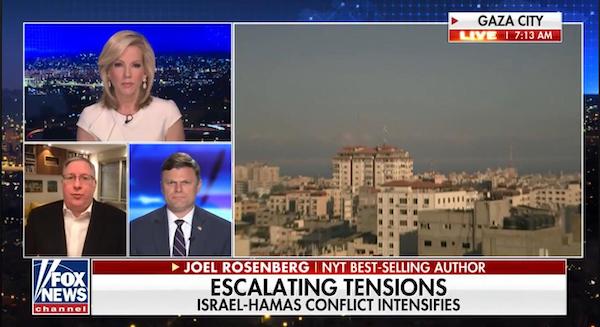 BREAM: Yes – and, Joel, you've spoken out quite a bit as you make the distinction about the Palestinian people and wishing peace and freedom for them as well, from Hamas.

Christian, the US has designated Hamas a terror group. I want to read you something from Senator Bernie Sanders. He had an op-ed today. He said, “In the Middle East, where we provide nearly $4 billion a year in aid to Israel, we can no longer be apologists for the right-wing Netanyahu government and its undemocratic and racist behavior. We must change course and adopt an even-handed approach. We must recognize that Palestinian rights matter, Palestinian lives matter.”

Christian, having served in the State Department, what do you make of that statement by a sitting senator?

WHITON: You know, I think that's a really degenerate point of view. I think it implies moral equivalence between Israel, which is a democracy that respects the rights not only of Jews in Israel, but of Arabs in Israel – Arabs actually can vote and they have all the same rights as Israelis in Israel, the other Israelis in Israel – compared to Hamas, which is an instrumentality of the Iranian government. I mean, that's where the funding for Hamas comes from. And it's fine for the Obama administration and Democrat senators to condemn Hamas. But guess what? The Biden administration is funding it. They have unfrozen – or at least they've unleashed – $235 million for Gaza, which ends up in the hands of the people who are making war on Israel.

And you have to ask yourself: Why now? Why has this cropped up after seven years of relative peace in Israel, and more broadly, general peace in the Middle East, certainly in the Levant? You know, what's changed in the last few months in the United States and U.S. policy towards Iran?

BREAM: Joel, you've said you wanted President Biden to be more forceful in speaking out about this. He has come under criticism for saying that Israel has a right to defend itself. In a statement on [the Islamic religious festival of] Eid today, he said this, “Palestinians, including in Gaza, and Israelis, equally deserve to live in dignity, safety and security. No family should have to fear for their safety within their own home or place of worship. We think most about the children in these societies who face trauma from a conflict far beyond their control.” Are you satisfied with the response thus far from the Biden administration? If not, what else would you like to see?

ROSENBERG: Well, look, I'm glad that Bernie Sanders isn't the President of the United States. I'll be honest. I mean, I say that as a Jewish person and also a follower of Jesus. Bernie Sanders is Jewish, but does not understand what's going on, that we are being attacked with 2,000 rockets and missiles from a terrorist regime. There is no moral equivalence. Okay?

But, I'm not satisfied with where President Biden is, but he has gotten better during the week. And we have to remember that President Biden is the best in the entire Democratic Party when it comes to Israel. Okay?

This is moral leadership. This is what is required now. He does say that we have the right to defend ourselves and we appreciate that. That's true. And he's right to talk about the human rights and the needs and the concerns of the Palestinian people. I one hundred percent agree with him.

And again, I want to call on Christians all over the world to show compassion for the people of Gaza. People don’t often realize – Christians don't often realize – that 22 times in the Bible Gaza is mentioned, up to and including in the New Testament where Philip the evangelist is sent by God to “the road to Gaza” to tell the Good News of Jesus Christ. So, God loves the people of Gaza, right? He doesn't want this war. We need to pray that this [terror] stops.

But we need the President of United States to be unequivocal [against terrorism], because if he isn't, the rest of the world will have a harder time. The world often follows American leadership, and they should. But President Biden needs to lead more strongly.

BREAM: So, Christian, a lot of the criticism of the President, a lot of the criticism coming from the Left, says that there's not a fair portrayal of what's happened here, what actually started this. They're pointing to Israel and saying it is the nation, the party, responsible for provoking what we're seeing now, which Israel is now responding to. As a former State Department official, what can you tell us about that characterization?

WHITON: Well, I think if you look certainly in Washington, but also in more broadly in the press around the world, there is this moral equivalence. There's this call for de-escalation. I mean, imagine if Canada fired a series after series of rockets at our capital and then everyone said, “Okay, you guys should really de-escalate.” I think we would probably want to eliminate the threat that caused this in the first place. And so that's what Israel is doing.

And, yes, civilians are dying. Israel takes a lot more care to avoid collateral damage, as it's euphemistically called, you know, when attacking Gaza. But this is not a threat that, frankly, can be allowed to persist. The Israelis need to be given encouragement and support to go and ablate, to reduce, the threat from Hamas. And then more broadly, we need to realize, you know, you sort of get lost in the alphabet soup of terrorist groups – of Hamas, of Islamic Jihad, of Hezbollah, of al-Qaeda, and ISIS – that at the end of the day, this is radical Islam, Islamism, that's animating this. And the chief progenitor of this – the chief financier of this – in the region is the Iranian government. That's the same government that the Biden administration is trying to get the “deal of the century” with and to let out of the doghouse, to give a bunch of financial assistance to, essentially, to get them back in a phony nuclear deal.

BREAM: We mentioned the other night a number of GOP senators have signed onto a letter asking the Biden administration to immediately cut off those negotiations with Iran, seeing a clear line of funding to Hamas, a group that again we have denoted very clearly as terrorists. Christian, thank you. And Joel, our prayers continue for the folks in the region to all be safe and peace to come. Thank you, guys.